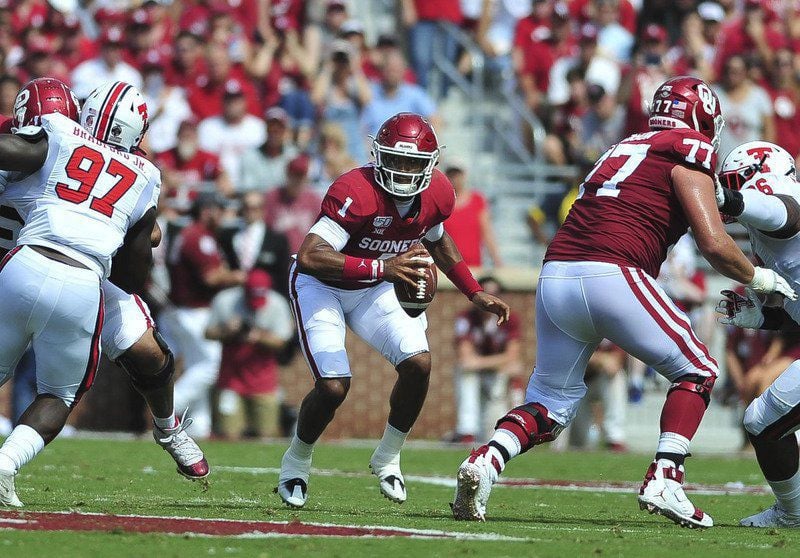 Oklahoma quarterback Jalen Hurts looks for an opening during the Sooners' game against Texas Tech, Sept. 28 at Owen Field. (Kyle Phillips / The Transcript) 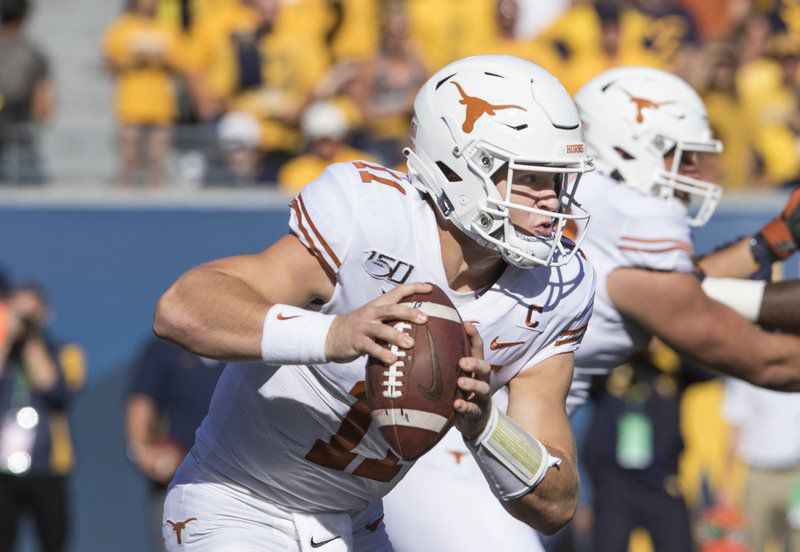 Oklahoma quarterback Jalen Hurts looks for an opening during the Sooners' game against Texas Tech, Sept. 28 at Owen Field. (Kyle Phillips / The Transcript)

At 6 feet, 3 inches and 230 pounds the Texas quarterback’s size makes him a challenge to bring down. Brown needed a full head of steam to make it happen.

“Let’s say if I stop running and I let up a little bit, I don’t think I would actually have tackled the guy. Because like I said, he’s so big he can run out of anything,” Brown said. “I’ve seen him get out of things with guys who are way bigger than me. If I would have stopped I don’t think that play would even exist.”

This year, QB size is once again part of the OU offense.

Like Bell, whose goal-line packages earned the moniker “Belldozer,” Hurts is effective from close range where play-calling is affected by shrunken field length.

Of his Hurts’ seven rushing TDs this season, six have come from inside or from the 5-yard line.

"It helps. It's an added weapon,” OU coach Lincoln Riley said. “It’s just different with the guy that you have back there. But certainly, he provides some opportunities down there that are in some ways different than what we've had.”

Hurts and Ehlinger, who are the Big 12’s second- and third-leading passers, respectively, are more likely to shred opponents with their arms. Hurts has thrown for 1,523 yards and 14 touchdowns on 109 attempts. Ehlinger has thrown for 1,448 yards and 17 TDs on 173 attempts.

But entering the week, Hurts is the Big 12’s third-leading rusher with 499 yards and 7 TDs.

For the No. 11-ranked Longhorns, Ehlinger has about half of Hurts’ yardage and hasn’t devastated teams inside the 5-yard line like his counterpart, scoring just once from there this season. In two games against OU in 2018, however, he scored three rushing TDs from 5 yards out or less.

“Some guys have the size. It’s one thing to say they have size. There are other guys who are big,” OU defensive coordinator Alex Grinch said. “But [Ehlinger] has a unique ability to find enough of a crease, then kind of create the pile moving forward. It’s why they’re good at what they do and why they’ve had so much success.”

As Brown described, wrapping up big QBs won't be easy in the Red River Shootout.

Plus, giving QBs the ball provides more protection. Several of Hurts’ scores have resulted in him pushing through a pile of offensive linemen and additional blockers.

Last week against Kansas, he also ran in a short touchdown untouched while running the option. The options are plenty.

“Just feel like it's just another bullet that you can fire at 'em that you maybe not always had,” Riley said. “It's been good here for us so far."