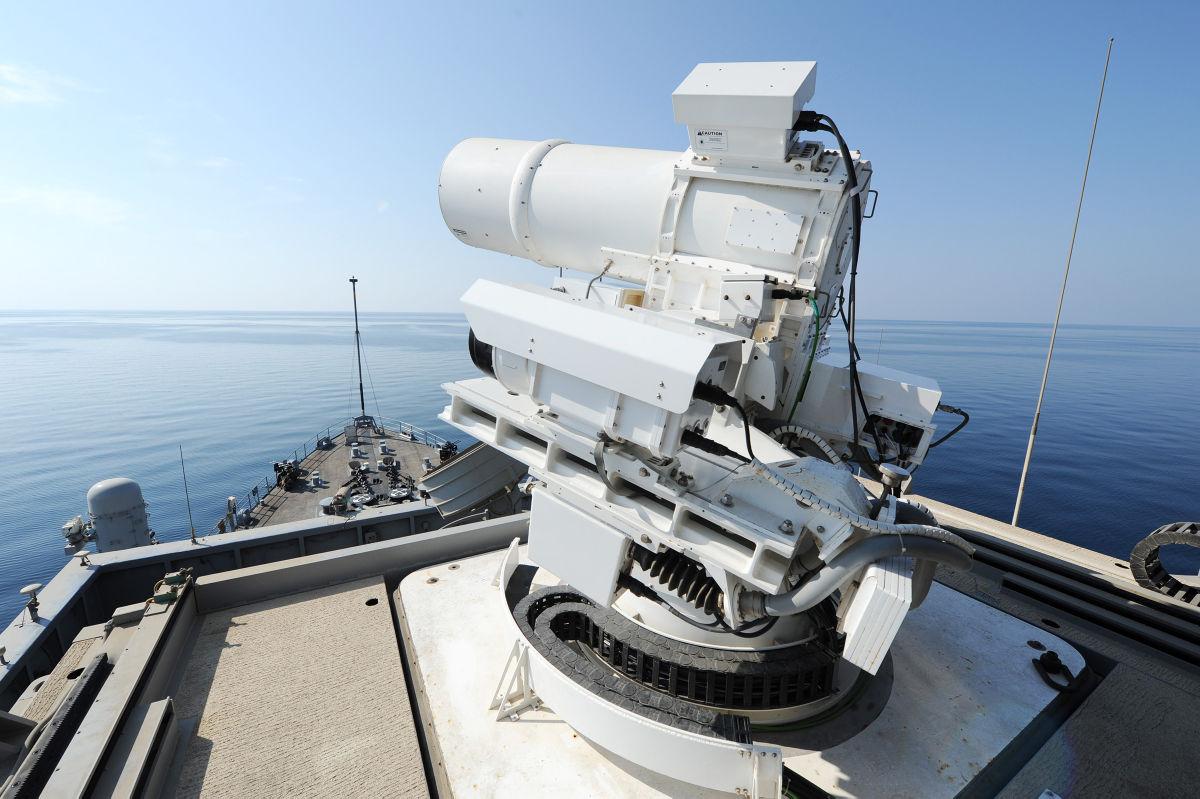 A laser weapon system aboard the USS Ponce, deployed to the Persian Gulf. For months, sailors tested a mounted on the deck of the USS Ponce; now the weapon, which looks like a big telescope, is ready to take out real threats if necessary, officials say. 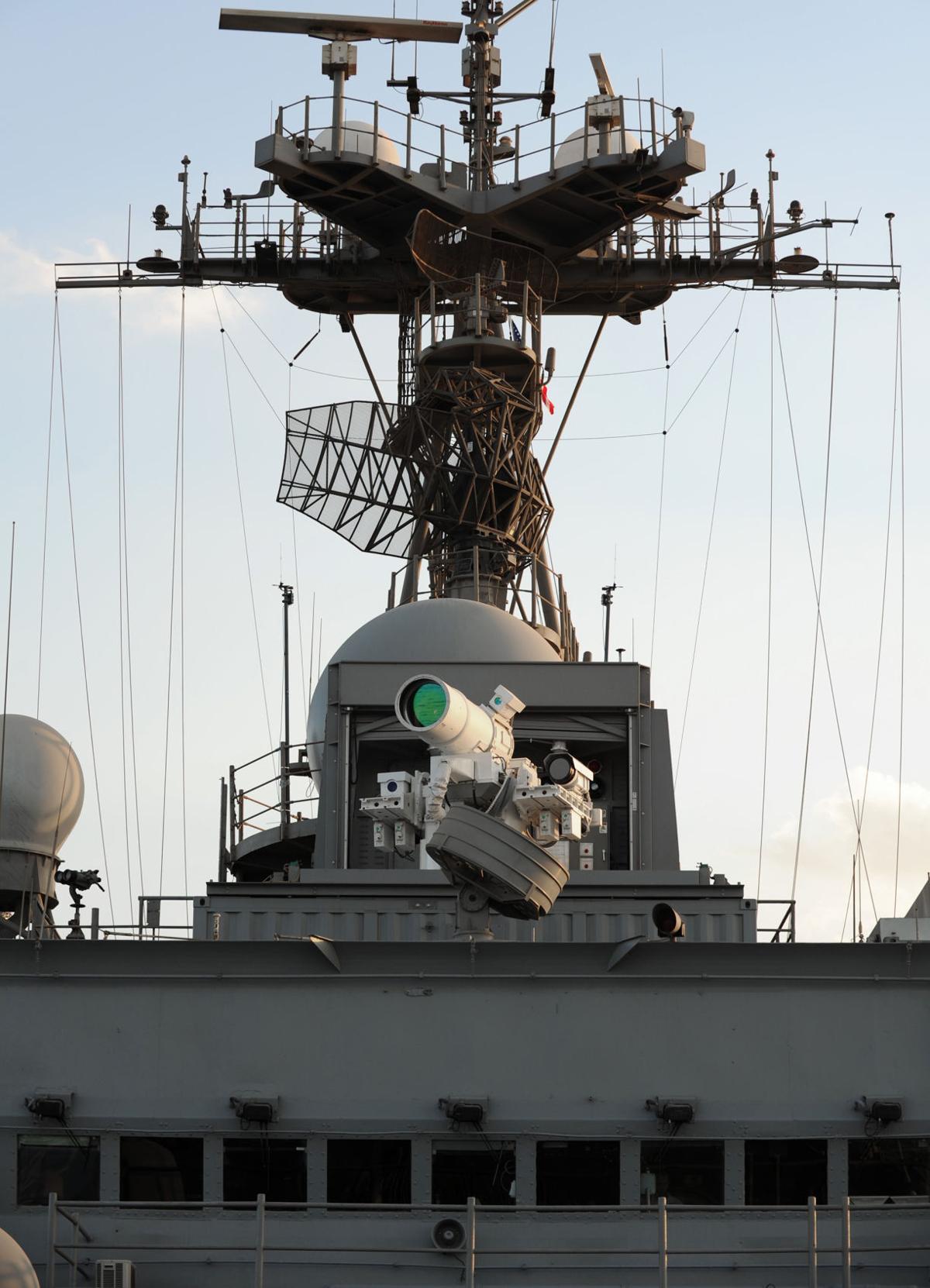 The laser mounted on the deck of the USS Ponce is used in an operational demonstration of the Office of Naval Research-sponsored Laser Weapon System while deployed to the Persian Gulf. 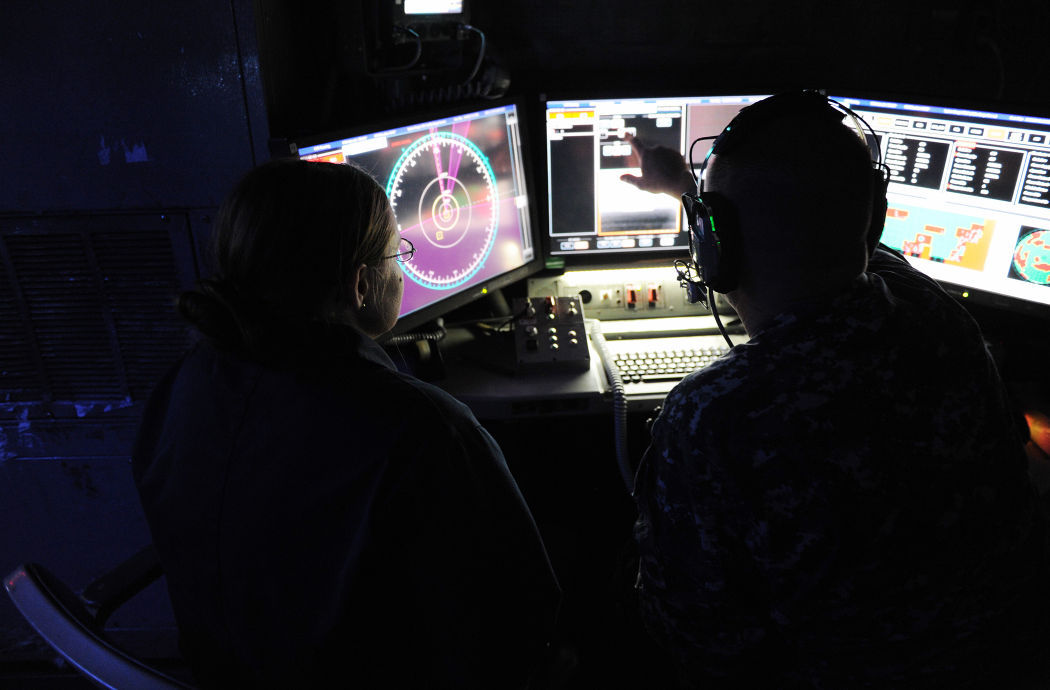 A laser weapon system aboard the USS Ponce, deployed to the Persian Gulf. For months, sailors tested a mounted on the deck of the USS Ponce; now the weapon, which looks like a big telescope, is ready to take out real threats if necessary, officials say.

The laser mounted on the deck of the USS Ponce is used in an operational demonstration of the Office of Naval Research-sponsored Laser Weapon System while deployed to the Persian Gulf.

WASHINGTON — One of the newest weapons in the Pentagon's vast arsenal is a concentrated beam of light, a laser that zaps and burns, delivering destruction by the kilowatt, as if in "Star Wars."

Under development for years by the military and the defense industry, lasers have moved from science-fiction fantasy to the laboratory and, just recently, to the Persian Gulf. They sizzle rather than go boom, providing pinpoint accuracy that proponents say can prevent the kind of collateral damage that is unavoidable with missiles or bombs.

And they represent the Pentagon's most aggressive push to use technology to bolster brute force, alongside efforts to develop helmets allowing a fighter pilot to see through the body of the plane, uniforms with fabric that conducts electricity, and Iron Man-like exoskeletons.

In announcing the Defense Innovation Initiative in November, Defense Secretary Chuck Hagel said that to keep its battlefield edge, the military needs to move with the urgency of a Silicon Valley start-up in developing breakthroughs in technologies such as robotics, autonomous systems, big data and 3-D printing.

While the United States has focused on fighting wars for more than a decade, Hagel said, potential enemies have taken the time to innovate. "Countries like Russia and China have been heavily investing in military modernization programs to blunt our military's technological edge," he said.

In December, the Navy announced a big step in that direction. For months, sailors tested a $40 million, 30-kilowatt laser mounted on the deck of the USS Ponce in the Persian Gulf. Using a video-game-like controller, service members practiced taking out drones and small boats. And now the weapon, which looks like a big telescope, is ready to take out real threats if necessary, officials said, meaning the Pentagon could soon record its first kill with a laser.

"The captain of that ship has all of the authorities necessary if there was a threat inbound to that ship," Rear Adm. Matthew Klunder said last month before stepping down as chief of naval research. "To protect our sailors and Marines, we would defend that ship with this laser system."

Unlike missiles, lasers travel at the speed of light, so they hit their target almost instantaneously. Once a system is built, its expense is essentially limited to the cost it takes to fuel it. Navy officials said the USS Ponce's laser, for example, costs 59 cents a shot, while the cost of some missiles that would perform the same attack can cost in the millions of dollars.

As long as there is power, lasers can also keep firing with an "unlimited magazine" that never needs to be reloaded, which is especially helpful for a ship at sea.

The power of lasers can also be changed. A low-energy pulse may disable a drone's sensors, a maneuver known as "dazzling." Crank it up, though, and drone becomes fireball.

But laser beams fire dead straight and cannot bend or easily change directions, so there has to be a clear line of site to the target. And if it is raining, or even cloudy, moisture in the atmosphere can make them less effective. Smoke and pollution can cause problems, as well.

And the enemy does not always attack on clear, sunny days.

"If you want to know the problem with lasers, try using a flashlight in the fog," said Loren Thompson, a defense analyst and consultant.

For years, lasers have been a key focus for many of the biggest defense contractors, including BAE Systems, Boeing, Lockheed Martin, Raytheon and Northrop Grumman. And the industry has been making advancements toward mounting them on trucks, tanks, aircraft and even drones, analysts said. In recent years, laser technology has reached a "tipping point" and soon could be widespread, said Rick Hunt, director of Raytheon's Navy and Marine Corps programs.

Tom Captain, a vice chairman at Deloitte who leads the consulting firm's aerospace and defense sector, said: "This isn't something in a Buck Rogers comic book. It's being deployed now."

Boeing has developed a massive truck it calls a High Energy Laser Mobile Demonstrator for the Army, with a laser designed to take out rockets, mortar shells and drones. During a recent demonstration, the laser targeted a dime-size beam on the 10-inch mortar shell and fried it until the shell exploded midair.

It could also protect against rockets and missiles that travel even faster, officials said.

While many of the lasers in development would be used for relatively short distances, within a few years companies will start producing far more-powerful weapons capable of much longer ranges, officials said.

And their precision could make them valuable in counterterrorism. Captain said he could envision the day when a drone spots a terrorist on the ground next to a playground filled with kids.

You can't "fire a Hellfire missile and blow up the 50 kids on the playground," Captain said. But a laser could be quick and deadly — without the collateral damage, he said.

Developing the rules of engagement for lasers took top Pentagon officials a year, Klunder said. And he said the Defense Department will comply with the Geneva Convention, which prohibits weapons that blind.

"We are going to honor the conventions with this laser system," Klunder said. "We're not going to use it to directly point and kill people."

The weapon is more effective, he said, when it is used to destroy the engines or sensors of ships and drones.

Patrick Wilcken, a trade and human rights researcher at Amnesty International, said lasers should be "very strictly regulated and controlled so that it is never used against a human target where there is a risk of eye damage."

Despite the advancements, many think lasers will not replace guns, cannons or missiles, but rather augment them.

That is a problem at a time when the defense budget is shrinking — not growing.

"The main budgetary drawback is that no one is proposing they replace existing weapons," said Thompson, the defense analyst. "They're saying, 'Why don't we have lasers, too?' But it's an addition in a budget that can't grow."

That has not stopped companies from developing lasers, which many think will become a must-have technology for the Pentagon.

BAE Systems, for example, has showcased what it calls a Future Technology Demonstrator, a tanklike vehicle that has a laser and a machine gun.

In other words, it can go sizzle and boom.