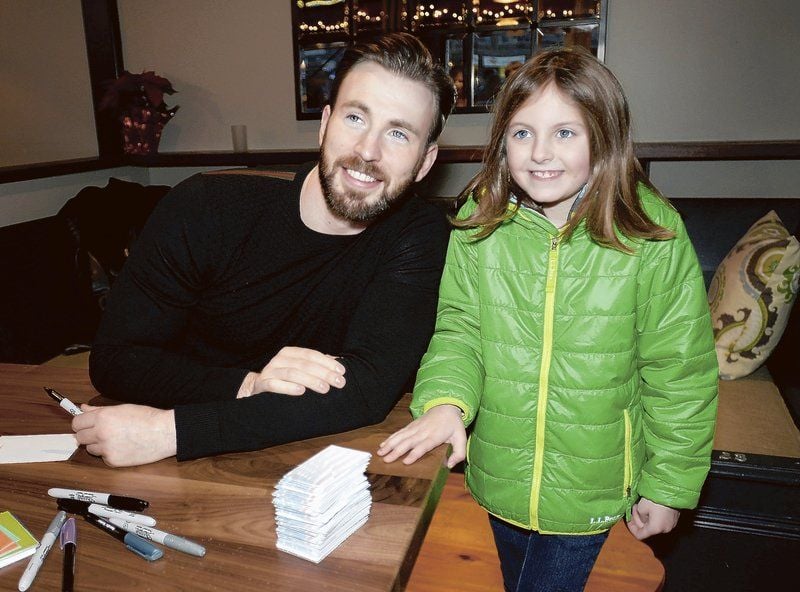 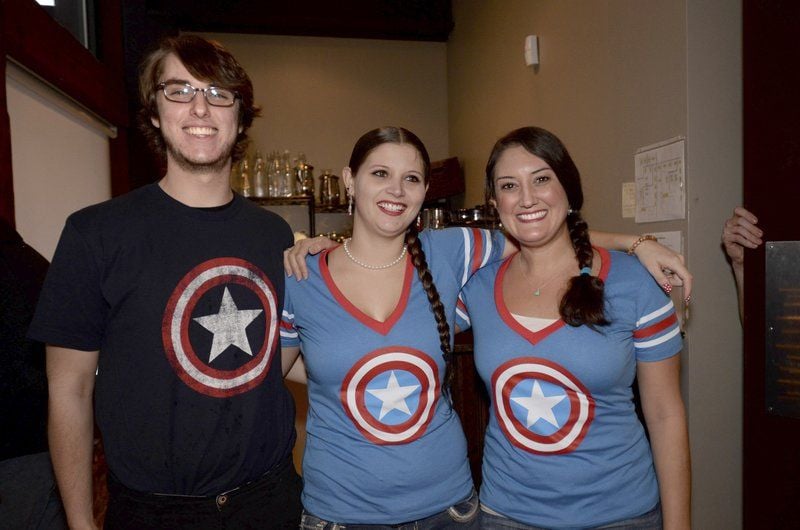 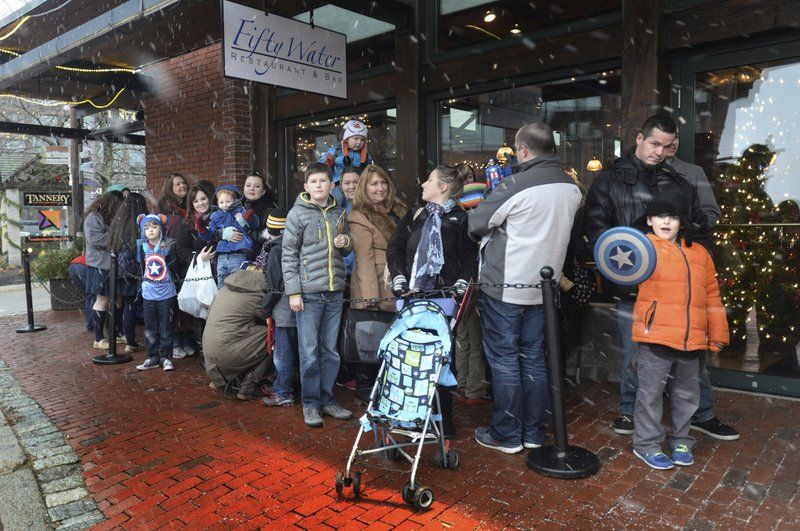 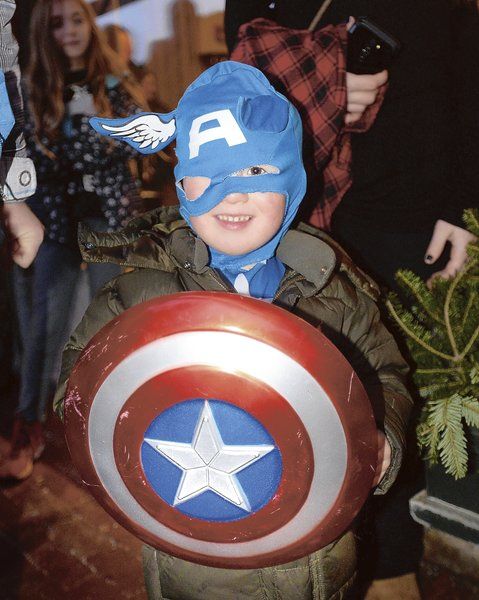 Daniel Hart, 3, of Amesbury waits in line to see actor Chris Evans, who portrays Captain America on the big screen. 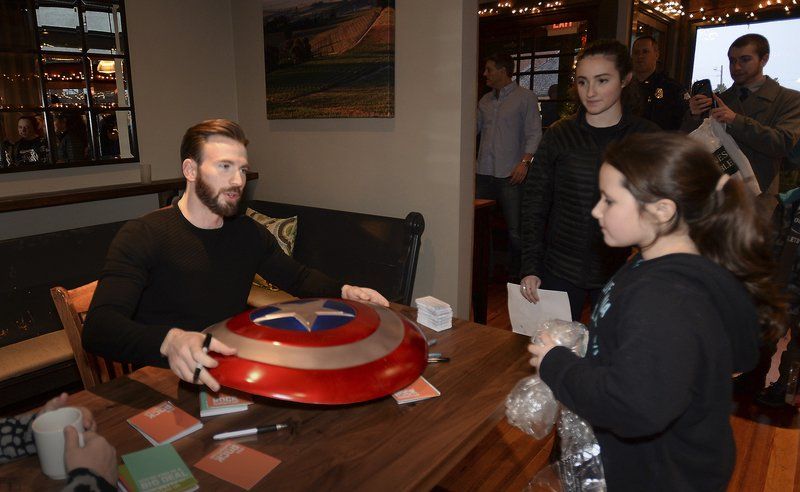 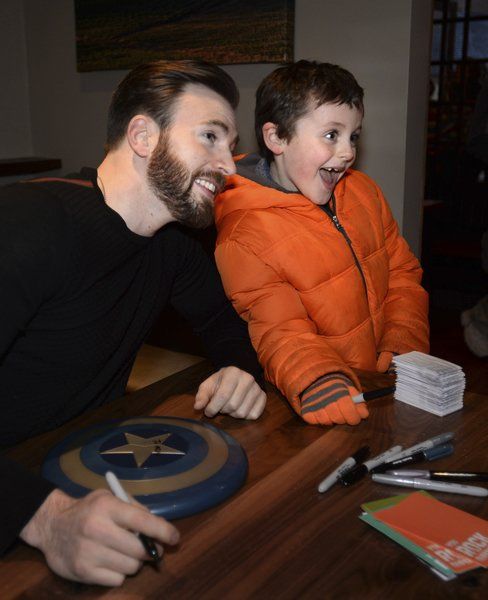 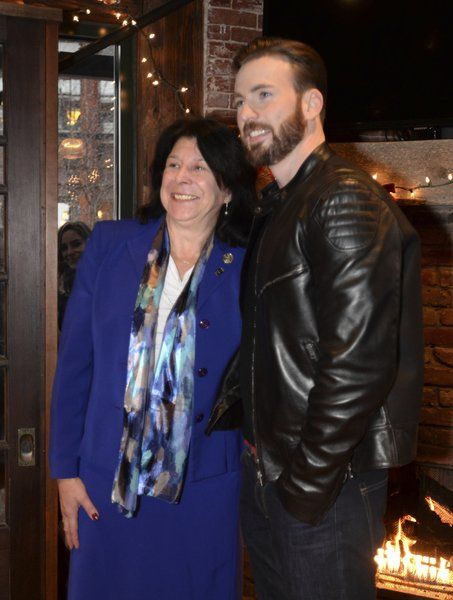 Daniel Hart, 3, of Amesbury waits in line to see actor Chris Evans, who portrays Captain America on the big screen.

“I have never been up here before. This is great, this is great,” said Chris Evans, the Hollywood actor who plays Captain America on the big screen. “It’s nice to be able to do things like this. We talked about doing this over Thanksgiving, but then you see it come together and it is very rewarding.”

“It is an honor to be able to bring any type of happiness to people, especially at this time of the year,” Evans said. “I know that is kind of cheesy, but I am a sucker for Christmas and I like to give back. That feels good.”

Evans was lending a helping hand to both The Pettengill House and his cousin, Robert Veek, whose restaurant Fifty Water Restaurant & Bar celebrated its ribbon-cutting ceremony with Newburyport Mayor Donna Holaday just prior to the autograph signing.

“I still think that there are a lot of superheroes in our community, but they prefer to be behind the scenes doing great work,” Holaday said. “But it is very exciting to see all the excitement of the kids and their enthusiasm and I think it is fabulous that they are raising money for The Pettengill House tonight.”

After the autograph signing, Evans, his brother, Scott, two of his aunts and his mother, Lisa, hosted a sold-out charity holiday party that raised over $3,000 for the Salisbury-based nonprofit that supports underprivileged children and families in the Greater Newburyport area. The idea for the dual events came from a family conversation over Thanksgiving.

“This got put together so fast and this is the same kind of cause that we both would want to do. It was just meant to be,” Veek said. “There are a lot of different charities in Newburyport. I know (The Pettengill House) is across the river, but they have a location here too. It was a perfect cause.”

Twelve-year-old Casey Holmes of Newburyport waited for two hours in the snow after his mother texted him about the autograph event while he was in school.

“I can’t feel my toes,” Casey said. “But it was totally worth it. I got my comic book signed. He is super nice. I asked them how in the beginning of the movie when he is all scrawny and they make him big and buff, I don’t know how they do that. I also asked him if he had a white Ferrari with red interior.”

Maya Gastman, 15, of Newburyport got a quick autograph from Evans as her friend, Shae Gallagher, 9, of Newburyport had a Captain America shield signed and Gallagher’s sister, Izzy, 11, had a trading card signed by Evans.

“It was a cool opportunity,” Maya said. “It was very super.”

Steve Hanshaw of Amesbury waited for two and a half hours to have a comic book and poster signed by Evans.

“It was worth it, no doubt,” Hanshaw said. “Especially since he is such a great guy. You would think that movie stars would be snooty and wouldn’t want to hang out with people and do charity events. But he is great and hilarious. I’m glad he did this.”

Assisting her son while he signed autographs, his mother said she is still getting used to having a superhero in her life.

“This is a little bit phenomenal,” Lisa Evans said. “This is a little bit bizarre from my point of view. But kids are his bliss. He loves kids. I’ve been with him when he is on set and you will be standing there and people are screaming and all of a sudden he will look over and see a little guy with a shield and just walks right over. That is his comfort level because it is pure, it is innocent, it is sweet, it is that hero stuff. He takes his role very, very seriously. He had those feelings for heroes when he was a kid. He still gets shaky knees about Tom Brady. So he gets it.”

Evans will begin production on “Captain America: Civil War” in the spring right before “Avengers: Age of Ultron” opens in May.

“These are all dreams,” Evans said. “And I am just lucky and grateful and just happy to be here. I’m along for the ride, really.”