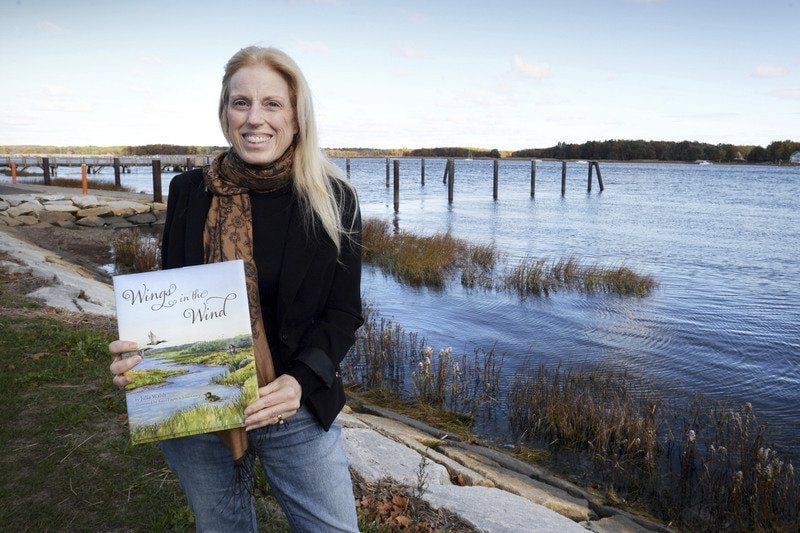 BRYAN EATON/Staff photoJulia Walsh Jewett of Newburyport stands in front of the Merrimack River, the setting of her children’s book “Wings in the Wind.” The story follows an orphaned duckling’s journey to adulthood. 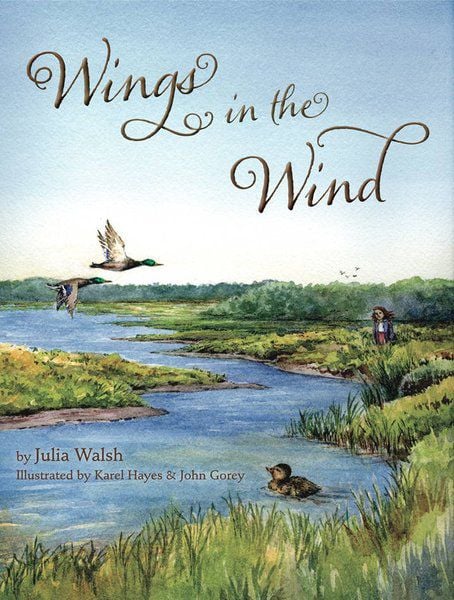 BRYAN EATON/Staff photoJulia Walsh Jewett of Newburyport stands in front of the Merrimack River, the setting of her children’s book “Wings in the Wind.” The story follows an orphaned duckling’s journey to adulthood.

Five years ago, Julia Walsh Jewett watched a scene unfold outside her home along the Merrimack River that left a lasting impression.

So, she took the experience and turned it into a children’s book.

Released in May, “Wings in the Wind” is based on the true account of an orphaned duckling that Walsh Jewett observed over the course of a year as he struggled to adapt to his new life — and survive.

Told through the eyes of a young girl named Julie, the book takes that tale of the drake and uses it to teach the lessons of compassion, responsibility, and a love toward nature and others.

The abandoned young duckling remained on the river alone, hunting for food and navigating his way, as other broods headed south. The Merrimack served as a destination for northern mallards migrating south in that mild winter, and the drake eventually joined a new flock and migrated north with them when the spring arrived.

So moved by what she witnessed during those many months, Walsh Jewett instantly felt that it would be a perfect story to share with a young audience.

A former school psychologist and piano teacher, Walsh Jewett knew children would connect with the book.

“I thought it would inspire children in so many ways,” she said.

“Children care very deeply about nature,” she said. “One thing I have found is that all children need that sense of family and community and need to know that they as an individual are cherished. ‘Wings in the Wind’ is about family and a sense of being connected with one another.”

During the course of the book, Julie watches her friend fight to adapt to his new life. In doing so, her own sense of responsibility and awareness grows, as shown in a scene with her grandfather, a World War II veteran who is based on Walsh Jewett’s own grandfather. That scene features the book’s only dialogue.

Walsh Jewett wrote the book under her maiden name in honor of her father, who died while she was in college. She teamed up with New Hampshire illustrator Karel Hayes, who — along with her son, John Gorey — created watercolor scenes of Newburyport’s coast and salt marsh, as well as scientifically accurate depictions of the ducks.

Walsh Jewett grew up in Delaware exploring the Chesapeake Bay. She has lived in Newburyport for eight years after moving to the city from Rowley.

“I love the feeling of a community and vitality we all enjoy (in Newburyport),” Walsh Jewett said, adding that she and her husband were always drawn to the city.

“Of course, we all love the river. It brings families together,” she said. “We had a young nursing student stay with us from Nigeria. She attended a festival with us on the riverfront in town. She commented that this was the feeling of community and family that she had been looking for in America.”

Although Walsh Jewett never intended to delve into the world of children’s books, she said she is embracing her new direction.

“I loved my years as a therapist and music teacher, but at this point, I am ready to continue with writing, and I have started my next children’s book,” she said. “My next book is also based on a true story. There is so much good in life when we watch ... and so many stories that need to be told.”

Next week, Walsh Jewett will hold a book signing for “Wings in the Wind” at The Book Rack in downtown Newburyport.

“We are thrilled to host an author whose book celebrates the natural beauty of Newburyport and its wildlife,” Book Rack manager Geoff Raywood wrote in an email.

What: “Wings in the Wind” book signing with author Julia Walsh Jewett