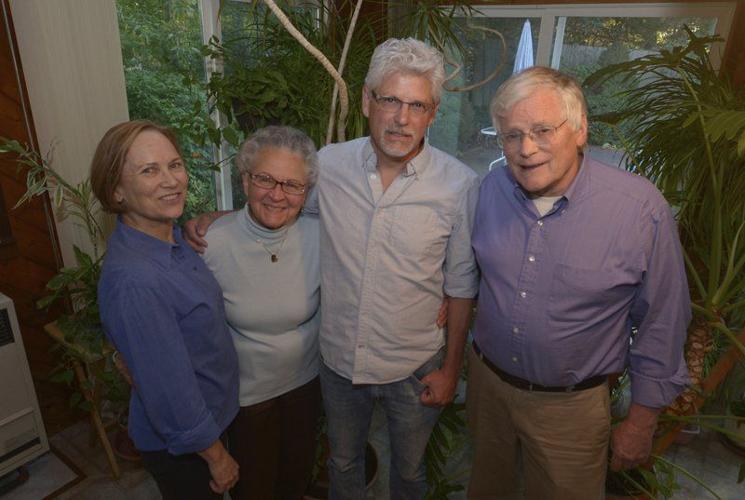 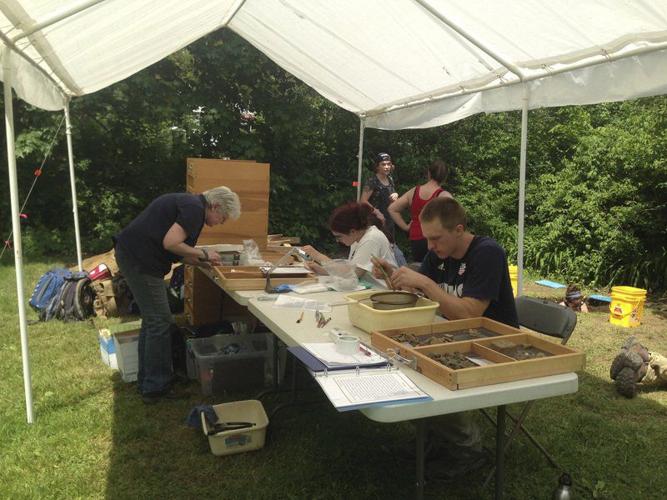 Dan Zoto/Courtesy photoJulie Woods, co-director of the UMass Historical Archaeology Field School at the Emily Dickinson Museum in Amherst, and students Rose Hirsch and John McNamara clean and analyze artifacts as they come out of the ground during an excavation at the site of the former conservatory at the museum. Woods will speak about the project as part of Saturday’s event in Newburyport. 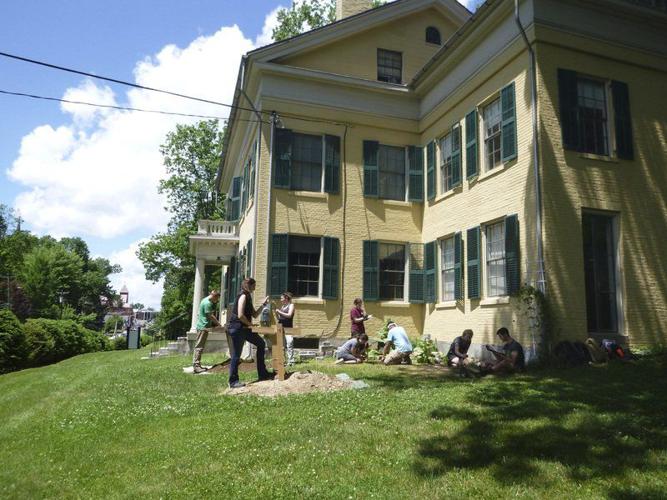 Dan Zoto/Courtesy photoStudents from the UMass Historical Archaeology Field School excavate at the site of the former conservatory at the Emily Dickinson Museum in Amherst. Julie Woods, co-director of the field school, will talk about the project during Saturday’s celebration of the poet in Newburyport.

Dan Zoto/Courtesy photoJulie Woods, co-director of the UMass Historical Archaeology Field School at the Emily Dickinson Museum in Amherst, and students Rose Hirsch and John McNamara clean and analyze artifacts as they come out of the ground during an excavation at the site of the former conservatory at the museum. Woods will speak about the project as part of Saturday’s event in Newburyport.

Dan Zoto/Courtesy photoStudents from the UMass Historical Archaeology Field School excavate at the site of the former conservatory at the Emily Dickinson Museum in Amherst. Julie Woods, co-director of the field school, will talk about the project during Saturday’s celebration of the poet in Newburyport.

Emily Dickinson was nothing if not an appreciator of all she saw — a blade of grass, the flitting wings of hummingbirds and the complex notion that for every unbridled joy must come an equal measure of pain.

And this weekend, a Powow River Poets celebration aims to appreciate her in return by bringing attention to the poet’s immense body of work.

One of the organizers, Toni Treadway said that the choice to feature Emily Dickinson was made last year at the close of their inaugural annual event feting a beloved poet. Last year’s honoree was Robert Frost.

Dickinson’s was the first name presented to the 100 or so guests at Old South Church in Newburyport, and the response was so enthusiastic that there was no need to look further.

Mayor Donna Holaday will kick off Saturday’s celebration by officially proclaiming it “Emily Dickinson Day” in Newburyport. Then, 11 community and cultural leaders will step forward to share their favorites of Dickinson’s thousands of poems, breathing new life into some of her best writings.

“We’ve got an abundance of people reading from the community,” said Treadway, who lists Holaday and aide Lois Honegger, state Rep. James Kelcourse, Newburyport High School English teacher Debbie Szabo, and several other poets among the group of readers.

The first hour will focus on the poetry itself, while the second hour will welcome poets Maggie Dietz and Gigi Thibodeau to speak about Dickinson and her gardens and how they likely inspired some of her most beautifully crafted poems.

After that, guests will hear from Jane Wald, executive director of the Emily Dickinson Museum in Amherst, and anthropologist Julie Woods, who is currently working to unearth the original gardens enjoyed and cultivated by Dickinson and her family.

The work being done at Dickinson’s homestead marks an effort to resurrect the orchards where lush gardens and greenhouses overflowed and apple, pear and plum trees once thrived and inspired.

Subsequent owners and a hurricane have wreaked havoc on the garden footprint, but careful work is being done to ensure that others can enjoy the landscape that existed when it was so beautifully penned into our imaginations.

Powow River Poets founding member Rhina Espaillat is one of the featured readers at Saturday’s event. She said that picking her favorite Dickinson poem is no easy task.

“There’s so many, it’s impossible to pick one,” Espaillat said. “But she does nature so well — the sensory aspects of nature.”

Whether it’s describing how a hummingbird buzzes about the flowers as if delivering news from another part of the world or touching on our shared human longing for love and permanence, Espaillat said that Dickinson’s poems display a deep intellectual understanding of the human condition.

“She’s a remarkably brave woman who, even though she spends so much of her time inside the house, is not really a hermit in the intellectual sense because her thought goes everywhere,” Espaillat said.

From her famous line “This is my letter to the world that never wrote to me,” Espaillat said that the mischievous Dickinson, who was way ahead of her time in so many ways, seemed to understand that she was communicating with a large audience. And she strived to connect with others and impart her ideas on life, love, pain and beauty.

“That she knew she had seen only a little portion of the world but felt with her imagination and gift for language she had touched more of it,” Espaillat said. “Only seven (of her poems) were published in her lifetime, but I think somewhere in her subconscious mind, she knew that she was good. She knew someday her work would be read by a great many people.”

Although Espaillat is keeping her selected poem a secret until she steps up to the podium of the Old South Church, she lets on that it will be one of Dickinson’s darker works. Those are the ones that Espaillat is finding herself drawn to lately.

“Death has been very much on my mind,” said Espaillat, who lost her husband this year.

As an accomplished lifelong poet in her own right, Espaillat is seeking solace these days in some of the profound thoughts set forward by Dickinson about how death in and of itself pales compared to the deaths we suffer when someone we love passes.

“Dying is not as bad as outliving those you love, which is a profound thought,” Espaillat said. “She’s saying in a way that living beyond the relationships that really matter to us is death in and of itself. For those of us who have lost someone recently, it rings true.”

For those more familiar with the light, merry poems of Dickinson, the twinge of darkness infused into some of her works can be jarring. But Espaillat makes the distinction that they’re not depressing.

“It’s intellectual,” Espaillat said. “It’s not what she feels that she’s putting down on paper — it’s what she thinks and knows.”

Despite Dickinson’s renowned aversion to being out in the public eye, Espaillat said she cultivated close relationships with those in her small circle of friends and family.

“She was a great letter writer,” Espaillat said. “She used to send baked goods with poems. She liked to leave them at the doorstep of people, things she had baked along with notes. She liked communicating with people and, of course, she communicated with the world.”

Another organizer of Saturday’s event, David Davis said it was through her close relationship with her sister, Lavinia, that we all came to know Dickinson’s name after her death in 1886.

“Emily Dickinson had maybe 1,700 poems under her bed in a box,” Davis said. “Nobody knew she had written that many poems or had them. She’d gotten her sister to agree to burn her letters after her death, but she didn’t mention the poems.”

Lavinia decided to let the world read them, and the rest is history.

“We would know nothing about Emily Dickinson if not for her sister,” Davis said.