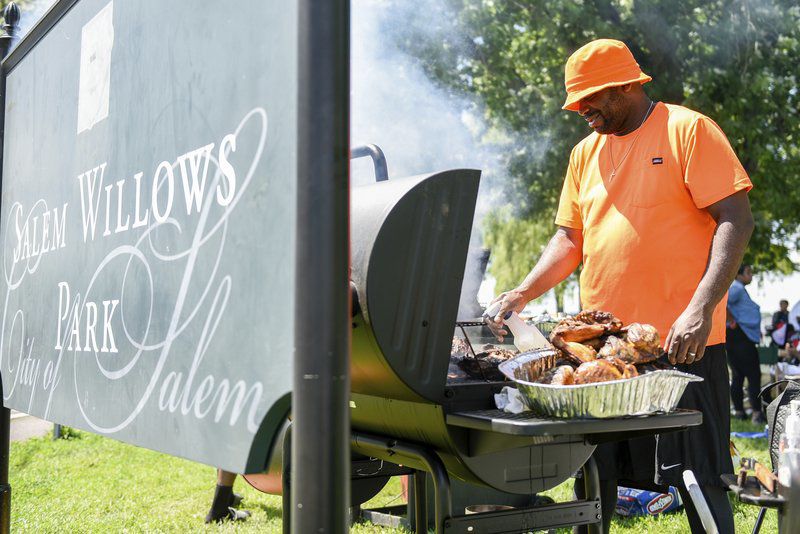 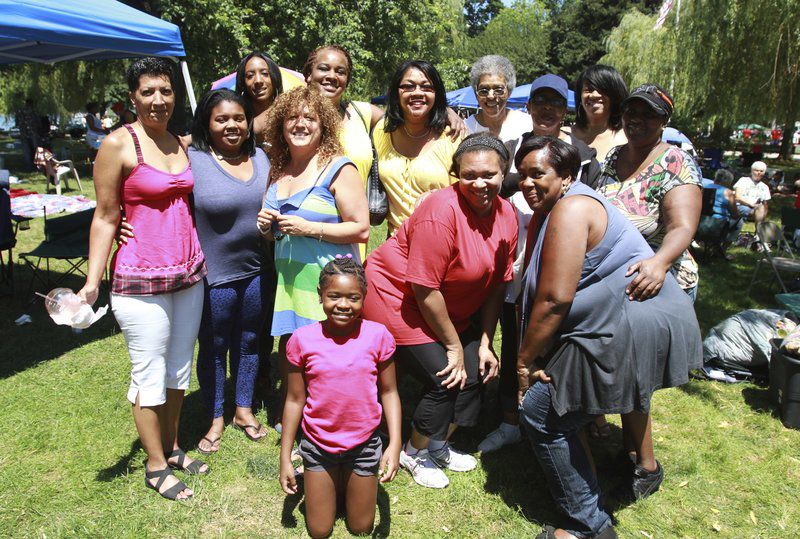 Staff file photoGenerations of the Hector family from Salem have been coming to the picnic for more than 100 years. 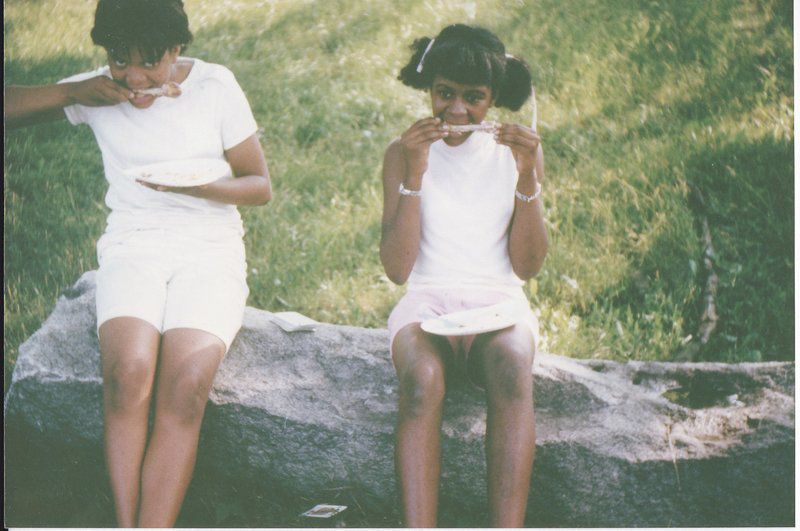 Courtesy photoDoreen Wade, left, who now organizes the Salem Black Picnic, is pictured at the event in the 1960s with her friend Valerie Alleyne. 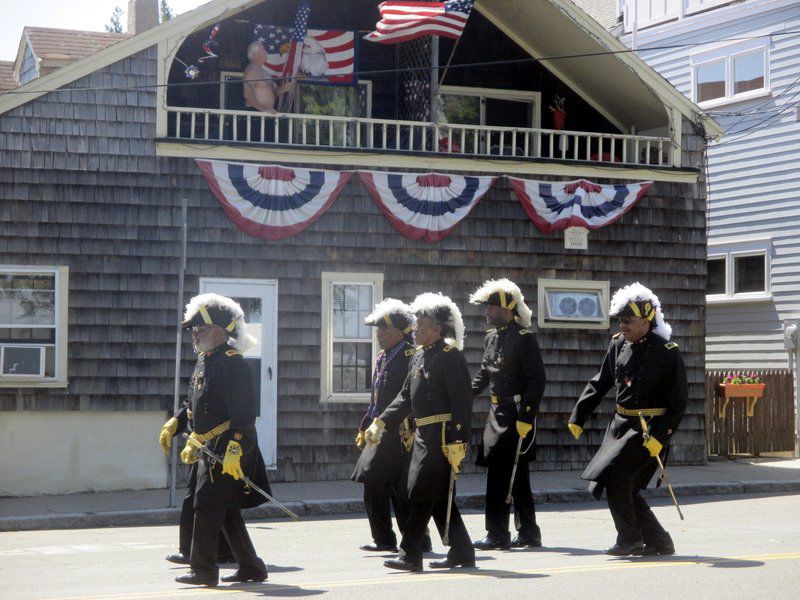 Courtesy photoMasons from the Prince Hall Lodge in Roxbury march in a parade during a past picnic. 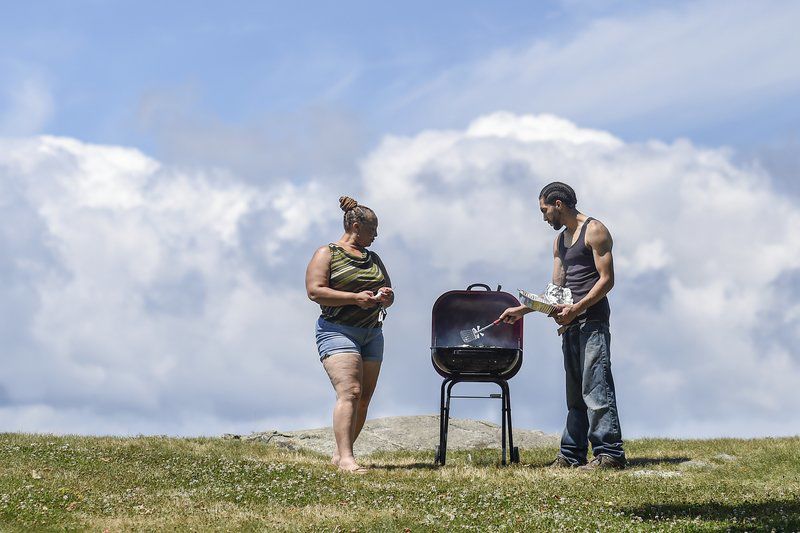 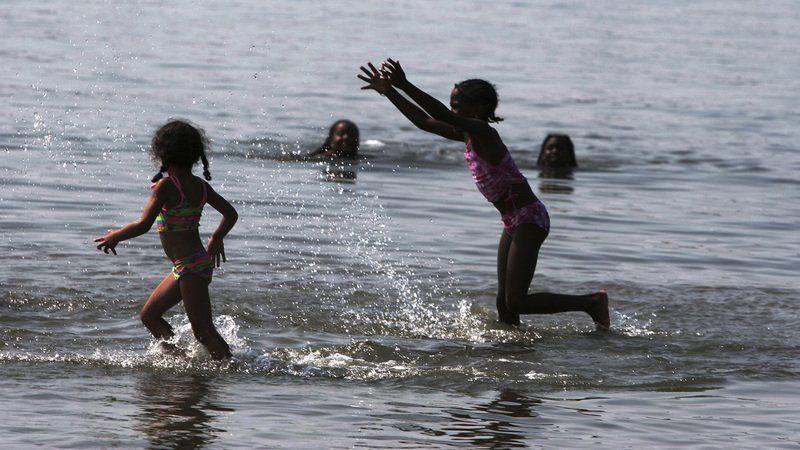 Staff file photoKalia Bing, right, chases after friend Sophia Gadsden at Dead Horse Beach during a past Salem Black Picnic. In the background are Zoe Smith and Mecca Holiday. 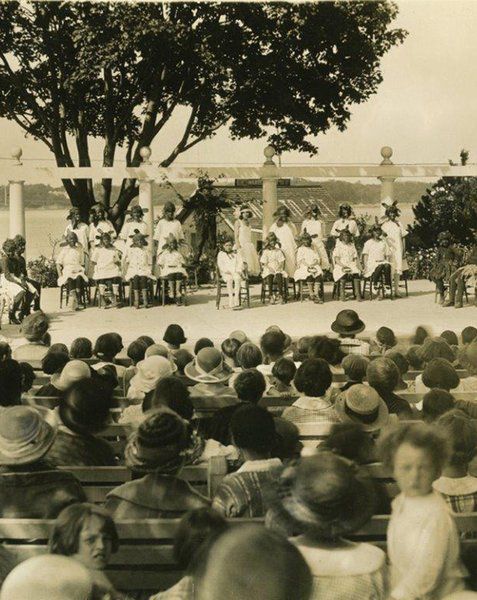 Staff file photoGenerations of the Hector family from Salem have been coming to the picnic for more than 100 years.

Courtesy photoDoreen Wade, left, who now organizes the Salem Black Picnic, is pictured at the event in the 1960s with her friend Valerie Alleyne.

Courtesy photoMasons from the Prince Hall Lodge in Roxbury march in a parade during a past picnic.

Staff file photoKalia Bing, right, chases after friend Sophia Gadsden at Dead Horse Beach during a past Salem Black Picnic. In the background are Zoe Smith and Mecca Holiday.

There are plenty of good things to eat at the Salem Black Picnic, but the event itself provides food for thought.

That’s because the picnic, which has been held at Salem Willows since the park was created in the 1880s, has roots in local history that go back before the American Revolution.

“To say it’s a picnic is probably taking away the value of what it is,” said Doreen Wade, president of Salem United, which now organizes the event. “I would say it’s a gathering of families to come together to celebrate history, and it’s done through food.”

Wade first got the idea for Salem United in 2014 and created the nonprofit organization to help bring a sense of purpose back to the picnic.

“We noticed that it was beginning to slow down,” she said. “People were not coming, there was no entertainment. Families were just showing up, cooking, being there for the day, then going home.”

Wade, who traces her family’s history back to 17th-century Pittsfield, said that she started coming to the picnic with her parents while she was growing up in Cambridge.

“It’s always been one of the best and most rewarding things I’ve ever gone to,” said Wade, who now lives in Framingham.

The families attending were “predominantly black” when Wade first started attending, and the food they served was traditional.

“Most families of color, that’s when you can get out there and do your spare ribs,” she said. “They bring collard greens, they bring potato salad. Those are the cultural food of the day, and those date all the way back.”

But the picnic also has a political flavor, because it evolved from an 18th-century tradition called Negro Election Day, during which enslaved and free people of color voted for a “governor” who had no real power, but was able to represent his community.

“He would work with the Massachusetts governor, and he (the “governor” of the people of color) would be the spokesperson for blacks throughout Massachusetts,” Wade said.

To help honor that tradition, the National Park Service supplied some dessert to a recent picnic in the form of an Election Day Cake, which was made from an 18th-century recipe by Ziggy & Sons’ Donuts in Salem, Wade said.

“They found this cake somewhere in their research, gave it to Salem United as a gift for the day, and cut it up and distributed it to people at the event,” she said.

The importance of this day was also acknowledged in 2015 when Gov. Charlie Baker signed a decree recognizing the Black Picnic as a historical event.

The honors continued this past January when Sen. Joan Lovely was joined by Sen. Bruce Tarr in sponsoring a bill to establish “the third Saturday in July as Black Picnic Day.”

That date was chosen for the picnic during World War II, according to the Salem United website, because African Americans were working in factories and weekends were the only days they could celebrate.

A focus on tradition

More details about this tradition may come to light, because the National Park Service recently hired professors Elizabeth Duclos-Orsello of Salem State University and Kabria Baumgartner of the University of New Hampshire to search for records relating to all aspects of African American history on the North Shore.

“Community members want to know the history of this event, and want to bring more publicity to the event, and so part of our task is to uncover as much as we can,” Baumgartner said.

The first document relating to something resembling Negro Election Day comes from the diary of Salem attorney Benjamin Lynde and dates to 1741, when Lynde noted: “Election; Negro’s hallowday here at Salem.”

“I believe this is the same day there would be a white election,” said Baumgartner, who gave a “History of the Salem Black Picnic” talk at The House of the Seven Gables in 2018. “African Americans are celebrating the same election day in their community.”

The next explicit reference is from 1817 and comes from the four-volume “Diary of William Bentley,” a Salem minister.

“He did write about African Americans celebrating Negro Election Day, electing your own governor through an alternative political process, if you want to call it that,” Baumgartner said.

There were other kinds of “Negro festivals” in the Northeast and even in the South, Baumgartner said, and some scholars have traced their origins back to West Africa.

Participants in the “Negro hallowday” of 1741 were mostly enslaved Africans, and while some of their owners gave them money for the festival, others were less supportive.

“I have a petition from a few slaveholders who were upset that the festival was happening,” Baumgartner said. “They felt it was too noisy and rambunctious, so they petitioned the city of Salem.”

Slavery was outlawed in Massachusetts in 1783, but voting rights are still a political issue today, and Baumgartner thinks that there are shared concerns in every phase of Salem’s event.

Some scholars believe “Negro festivals” in general stopped after the Civil War, but Baumgartner said, “We know in the 1920s and 1930s, they began again,” and there is still plenty to learn about Salem’s local traditions.

Wade thinks that the Salem Black Picnic grew less popular as its connection to politics was obscured over time, and after voting rights for minorities seemed secured by legislation and constitutional amendments in the 1960s.

But some of these protections have been peeled back by the Supreme Court, even as the picnic has evolved to embrace an array of traditions.

“It’s nice because even though it’s called the Black Picnic, we have grown very much through diversity,” Wade said. “We have Asian, Spanish, black, white.”

Music has always been an important part of the picnic, and Wade has enlisted several bands in recent years to make sure that tradition continues.

Parades are a traditional element of Negro Election Day that Wade has renewed, and she expects Lovely, the Essex County Sheriff’s Department Honor Guard and many more to participate in this year’s event, which will be led by a re-enactor portraying the “governor.”

“This year will be the first year that black Masons and white Masons have marched together in 100 years,” Wade said.

While vendors sell some wares at the picnic, Wade said that she mostly invites organizations that “educate and inform,” and these have ranged from the Tuskegee Airmen to the No Place for Hate organization.

“The most important thing we have is voter registration,” she said. “Every year, we make sure we register people to vote.”

But one of the most remarkable elements of the picnic, which some families have been attending for generations, is that people still come from across Massachusetts and all over the country to attend.

“People who grew up in Lynn, Medford, Cambridge, Boston, Beverly, anywhere around — any of us who grew up here and have been going for years, we may have moved to California,” Wade said.

“They come back,” she said. “They took a break, and now again, they’re starting to come back, and people are learning about it.”