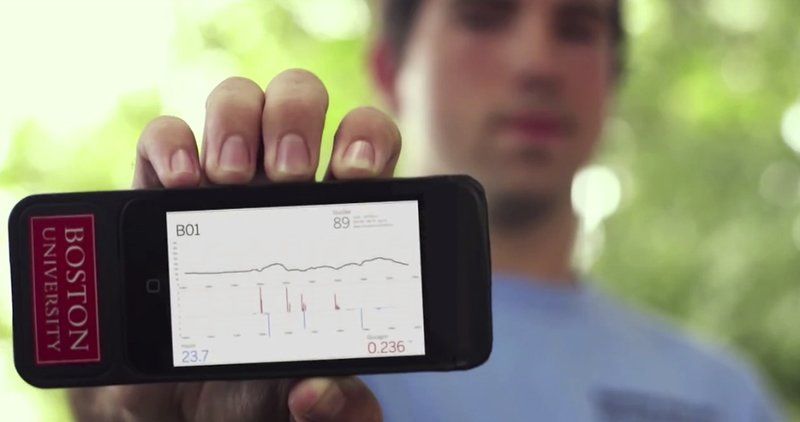 Colby Clarizia, a counselor at Camp Joslin and past participant in a bionic pancreas trial, holds up part of the device. Courtesy photo 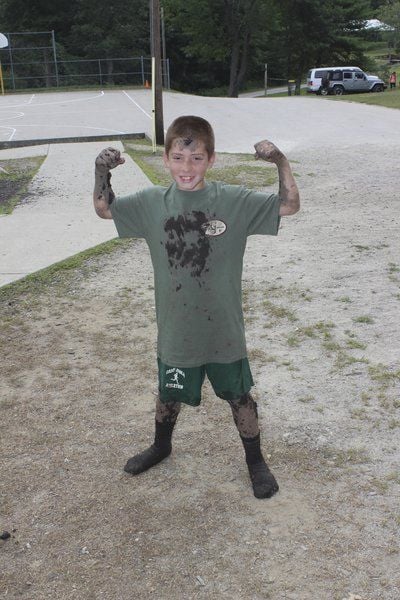 Courtesy photoCarson Clarizia of Amesbury is all smiles after finishing the "Hike to Heck," a trek through a giant mud pit behind Camp Joslin, last month. 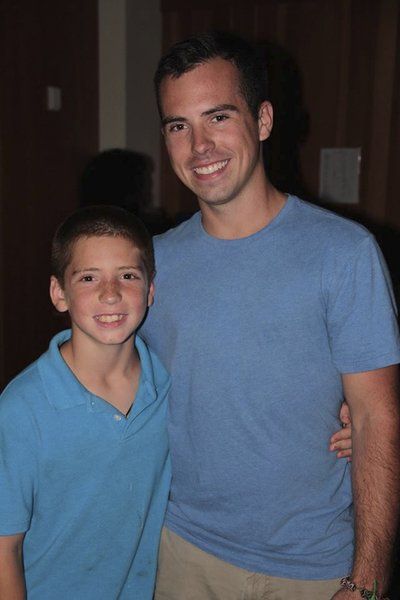 Courtesy photoCarson, left, and Colby Clarizia take a break at Camp Joslin in Charlton. Both boys have type 1 diabetes and have participated in bionic pancreas studies at the camp, where Colby is now a counselor.

Colby Clarizia, a counselor at Camp Joslin and past participant in a bionic pancreas trial, holds up part of the device. Courtesy photo

Courtesy photoCarson Clarizia of Amesbury is all smiles after finishing the "Hike to Heck," a trek through a giant mud pit behind Camp Joslin, last month.

Courtesy photoCarson, left, and Colby Clarizia take a break at Camp Joslin in Charlton. Both boys have type 1 diabetes and have participated in bionic pancreas studies at the camp, where Colby is now a counselor.

Like all parents, Constance Clarizia wants a short respite and sweet dreams at the end of the day.

But for the past 14 years, nighttimes have not been sweet. With two sons who have Type 1, insulin-dependent diabetes, nighttimes have meant monitoring of blood sugar levels even while her children are sleeping.

It has meant some nights of checking every half-hour, Clarizia said, because diabetes is a disease of changing blood sugars throughout the day and night. If levels are either too high or too low, lifesaving adjustments are needed for sons Colby and Carson.

But a new device now in clinical trials has the possibility of doing the work that vigilant parents have been doing for years and may restore sweet dreams for families like the Clarizias.

Diabetes was the seventh-leading cause of death in the United States in 2010, according to the American Diabetes Association. About 9 percent of the total population, including 0.25 percent of youths under the age of 20, were diagnosed in 2012. However, only 5 percent of those with diabetes have Type 1, formerly known as juvenile diabetes.

Diabetes is a disease of unknown cause that attacks the pancreas and destroys the cells that produce insulin. This inhibits the body’s normal ability to convert carbohydrates into energy. Even at rest, the body may demand more insulin or its opposing hormone, glucagon, without giving the diabetic a warning.

Fourteen years ago, when Ed Damiano, an associate professor of engineering at Boston University, received a diagnosis of Type 1 diabetes for his son David, he began wondering if he could make a device that would help out. He was concerned with long-term health effects but also wanted to solve the dilemma facing the sleeping diabetic.

Damiano was worried about “dead in bed” syndrome, caused by dangerously low blood sugars that can result in unconsciousness, coma and even death without warning the sleeping diabetic.

Parents and adult caregivers have long stood guard against dead in bed syndrome, but Endiamo wondered how his son would fare transitioning to independent living. How would he go to college?

“When you are sleeping, you are checked out. You don’t want to check out permanently,” Damiano told BU’s Bostonia magazine last summer.

Damiano began developing a device that would think for the patient even at rest, much as a normal pancreas does, and much as an adult caregiver now does for a diabetic child. The result is the bionic, or artificial, pancreas, which is in its eighth year of clinical trials.

The device represents a solution that is as close to a cure as some feel possible for now and may be available to the commercial market by 2017, the same year that Damiano’s son will go to college.

Developed by a collaborative biomedical team between BU and Massachusetts General Hospital, the device is worn externally and consists of two hormone pumps, an iPhone and a glucose monitor that measures blood sugar levels every five minutes. It is a marriage of biology and technology, with a powerful algorithm capable of recommending and delivering instantaneous blood sugar hormone balances better than any diabetic can replicate on his or her own.

Clarizia brothers Colby, 21, and Carson, 10, had the opportunity to wear the bionic pancreas while attending Camp Joslin in Charlton over the past two summers, Colby last year and Carson this year.

Camp Joslin for boys and Clara Barton Camp for girls both participate in the ongoing clinical trial of the artificial pancreas, supplying the BU bionic pancreas study team with a motivated population of youths between the ages of 6 and 20.

The device allows the campers five worry-free days of camp life. No checking blood levels while in the middle of baseball game, no worries about eating too much ice cream and paying for it later with low energy, listlessness and malaise.

Damiano said his goal is to build a device that will allow the diabetic the luxury that all non-diabetics enjoy: never thinking about blood sugar at all. The campers affectionately call the device their “bio panky” and proudly display its attachment under the skin on their bellies.

For Colby Clarizia, it has meant a greater thrill beyond a bowl of ice cream or a jelly doughnut. He is more focused on his long-term health.

No matter how vigilant or responsible a diabetic is, some spiking and falling of blood sugars is inevitable. It is this absence of more consistent blood sugars that leads to the long-term wear and tear on the body systems and increases vulnerability to health consequences such as blindness, kidney failure, peripheral vascular disease, infections and amputations.

One of the co-leaders of the study, Dr. Steve Russell of the MGH Diabetes Unit, said that the bionic pancreas is superior to present options “because it is always looking out for you.”

It is self-correcting, constantly making little adjustments to keep the blood sugars in the optimal range and learning from the patient’s own history how much insulin or glucagon to provide.

“All of the participants in the study had blood sugars that would greatly reduce, if not eliminate, the long-term risks of diabetes,” Russell said.

“Colby has a very mature view of it, and that is going to be a great self-preservation attitude for him, but it’s unfortunate that he has to think about that and worry about that,” Russell said. “It takes some of the carefree joy out of childhood.”

But Clarizia’s attitude is positive, and he said he is looking forward to the release of the bionic pancreas.

“When I was diagnosed at age 7, I was told a cure was five years away,” Clarizia said. “Now, it has been 14 years. (The bionic pancreas) is as close to a cure as I will see in my lifetime.”

Clarizia and Russell both mentioned that the newest device in development will be smaller and more compact than the current model.

“But I would carry a brick if I had to,” Clarizia said.

For more information on the development and production of the bionic pancreas, visit www.bionicpancreas.com.