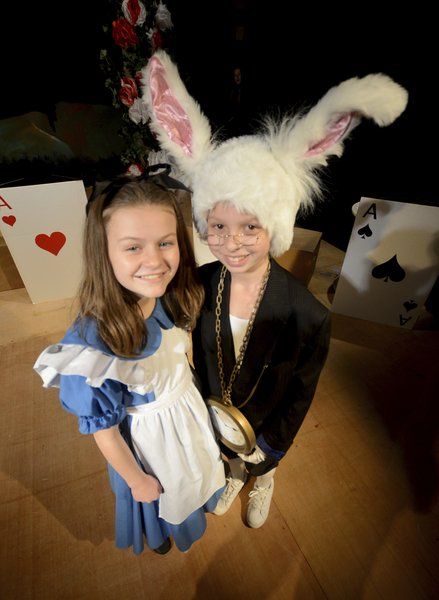 JIM VAIKNORAS/Staff photoSam Currier as Alice and Hannah Balaam as the White Rabbit are all smiles at Sunday’s rehearsal for “Alice in Wonderland.” 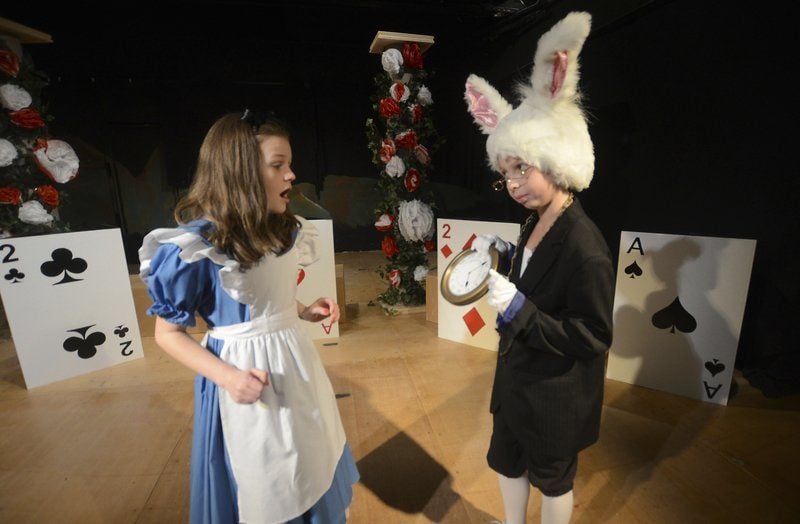 JIM VAIKNORAS/Staff photoSam Currier as Alice and Hannah Balaam as the White Rabbit rehearse a scene for the Amesbury Children’s Workshop production of “Alice in Wonderland.” 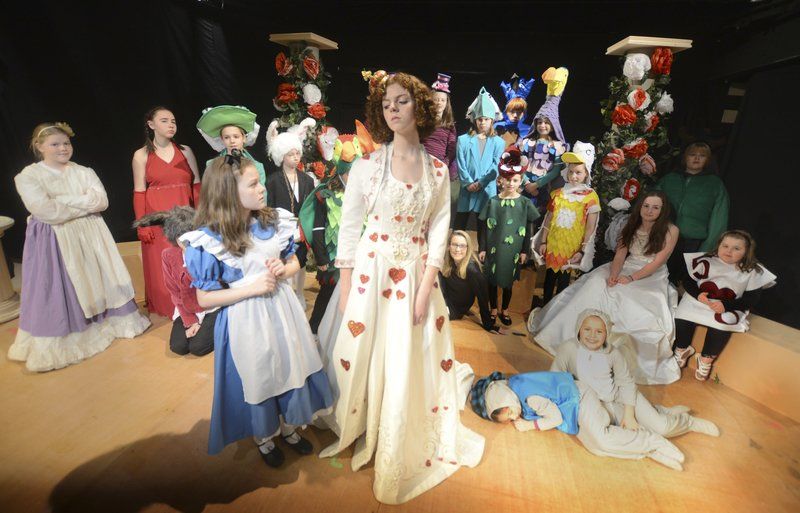 Jim Vaiknoras/Staff photoSam Currier as Alice and Carolyn Sullivan as the Queen of Hearts are surrounded by fellow cast members during rehearsal for the Amesbury Children’s Workshop production of “Alice in Wonderland.”

JIM VAIKNORAS/Staff photoSam Currier as Alice and Hannah Balaam as the White Rabbit are all smiles at Sunday’s rehearsal for “Alice in Wonderland.”

JIM VAIKNORAS/Staff photoSam Currier as Alice and Hannah Balaam as the White Rabbit rehearse a scene for the Amesbury Children’s Workshop production of “Alice in Wonderland.”

Jim Vaiknoras/Staff photoSam Currier as Alice and Carolyn Sullivan as the Queen of Hearts are surrounded by fellow cast members during rehearsal for the Amesbury Children’s Workshop production of “Alice in Wonderland.”

Amesbury Children’s Theatre is igniting imaginations with its fall production of “Alice in Wonderland.”

It’s a new rendition of the tale of Alice, a young and not-terribly-scholarly girl who gets bored with her books one afternoon and chases an odd white rabbit down into its hole. At the bottom, Alice arrives in the fantastical world of Wonderland, where insanity is the rule and logic flies out the window.

The play is a sequence of vignettes in Wonderland, with each scene being a trial along Alice’s continuing journey of self-discovery. She meets a duchess, a hatter, a wide variety of talking animals and, of course, the famous Queen of Hearts, all of whom teach her cryptic lessons about the nature of life and reality itself.

“Each scene is a different journey,” said Graham Campbell, 13, who plays the Mad Hatter. “We’re another step in the journey, teaching her what’s important and what’s not, what’s real and what isn’t.”

ACT’s version of the classic has taken on a 1960s vibe, according to artistic director Michelle Spadafora. The move was inspired by legendary rock band Jefferson Airplane, whose song “White Rabbit” provides the opening music.

The song is a loose chronicle of the Lewis Carroll story and is best known for the lyrics: “When logic and proportion/ Have fallen sloppy dead /And the White Knight is talking backwards/ And the Red Queen’s lost her head/ Remember what the Dormouse said/ Feed your head.”

When the cast and crew saw how well that opening number worked, the ’60s feel began to infect the rest of the production, Spadafora said.

“We wanted to appeal, to put some humor, to put some vibe that adults would appreciate,” she said. “Then, the Mad Hatter really went with it and incorporated his costume to give off more of a ’60s vibe and created a character in the likes of Tommy Chong.”

In addition to “White Rabbit,” there are plenty of other musical attractions, including the Tweedledee and Tweedledum twins’ Broadway-style performance and a number of melodic twists throughout the show.

ACT is a theater by and for the community’s children. Plays are chosen specifically for being accessible, inoffensive and imaginative, and actors play everything from main characters to flowers, cars and birds.

According to Spadafora, it’s a troupe that accepts players from 5 to 100 with the hope of opening the acting opportunity to all.

“It is, for some of them, their first performance,” Spadafora said. “We’re trying to teach them stage presence, teamwork, confidence, following directions and learning how to have fun while they work as a group.”

Perhaps the best example of that is 13-year-old Sam Currier, who plays Alice. The seventh-grader at Amesbury Middle School rose to the role after playing two smaller parts in “Yes, Virginia The Musical” and “Disney’s Cinderella Kids,” in which she played one of the evil stepsisters.

“It’s a very big step up because I had never had a lead role before this,” Sam said. “I have a ton of lines I need to memorize, and I’m on stage for practically the whole show, so I don’t have a lot of downtime. It’s something that I’ve wanted to do for a while, and it’s very exciting.”

On the other side of the spectrum is Derek Balaam, playing the Duchess (cast, Spadafora jokes, because “he fits in the dress!”). Balaam is one of two adults in the show and became involved with the company after his daughter and wife cajoled him to play Pere Noel in “Yes, Virginia The Musical.” He now plays a nonsensical Duchess fighting a clamorous Cook.

It’s an opportunity to get out of the house and enjoy time with his family, Balaam said. It’s also a way to contribute to the theatrical development of children in his own community.

“It’s really unique,” he said. “You’ve got some kids that come, first thing, they’re talking with their heads down, and the next thing you know, at 5 years, they’re just belting out their lines.”

The show plays this Friday through Sunday at Amesbury’s Sparhawk School, which has donated performance and rehearsal space after previous theater space in the Amesbury Cultural Center was sold by the city.

Saturday will be a particularly special day for the company as it hosts a Mad Hatter’s Tea Party at 12:30 p.m. The event will feature backstage tours, a full luncheon and appearances by characters, followed by a private showing of the play. The regular performance will be presented that evening.

What: “Alice in Wonderland”

How much: $10 general admission, $15 for limited reserved seating and $25 for Saturday’s Mad Hatter’s Tea Party and private matinee performance at 12:30 p.m.