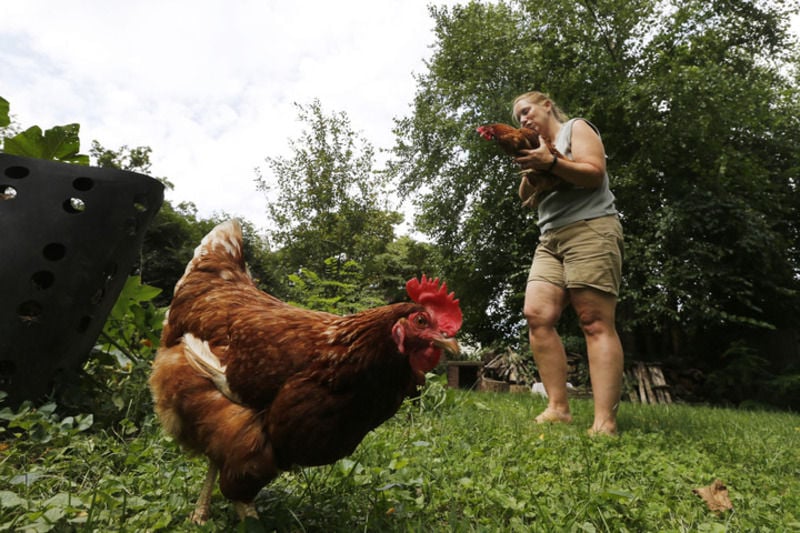 Sandy Schmidt, who owns a portable chicken coop, rounds up her chickens at her home in Silver Spring, Md. 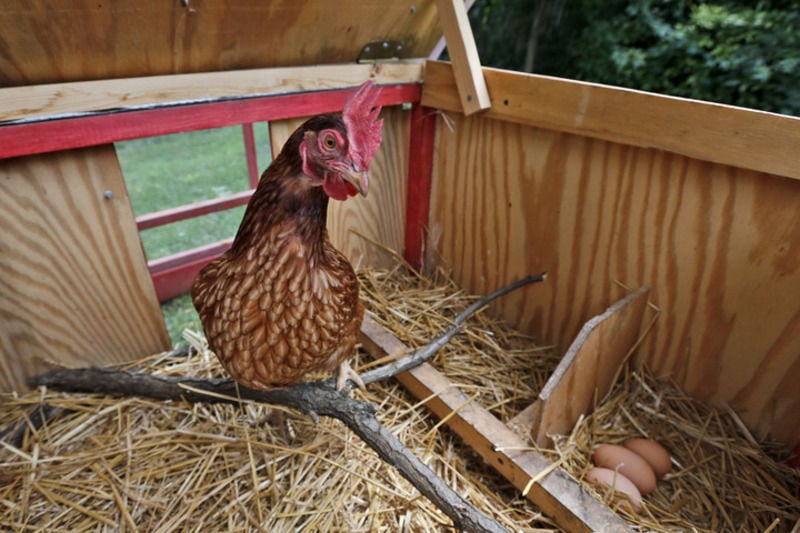 A chicken stands by three eggs in a portable chicken coop owned by Sandy Schmidt in Silver Spring, Md. 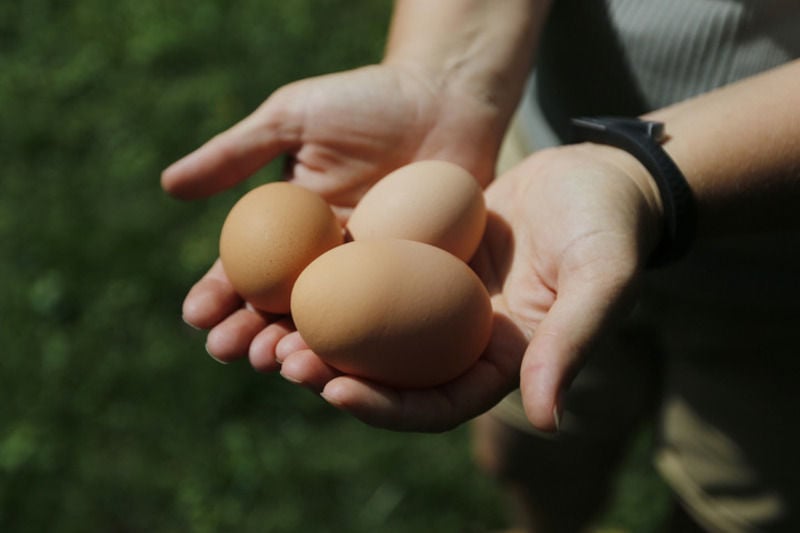 Schmidt shows three eggs that were laid by the chickens she keeps in her backyard. 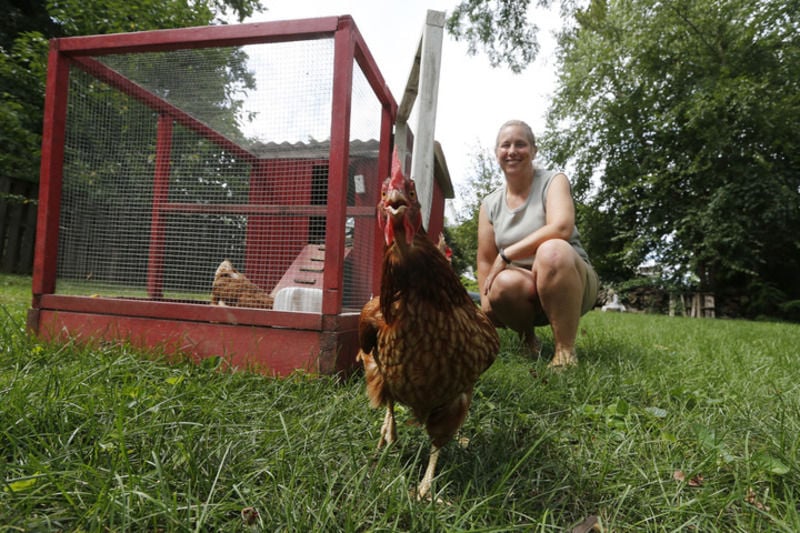 Sandy Schmidt, who owns a portable chicken coop, poses with her chickens at her home in Silver Spring, Md.

Sandy Schmidt, who owns a portable chicken coop, rounds up her chickens at her home in Silver Spring, Md.

A chicken stands by three eggs in a portable chicken coop owned by Sandy Schmidt in Silver Spring, Md.

Schmidt shows three eggs that were laid by the chickens she keeps in her backyard.

Sandy Schmidt, who owns a portable chicken coop, poses with her chickens at her home in Silver Spring, Md.

“Eat local” is the foodie mantra, and nothing is more local than an egg from your own backyard.

That enticement has led many city dwellers and suburbanites to consider putting up a coop and keeping chickens. The online community BackYardChickens.com, for example, has more than 200,000 members, about half of whom have joined in the last two years.

But what’s the cost in time and money — and what will the neighbors think?

Sandy Schmidt of Silver Spring, Md., compares the time required for basic chicken care to that for a more familiar pet: “It’s about like having a cat,” she says. “Make sure they have food and water every day, scoop out the coop — like a litter box — and let them out of the coop.”

One big difference, though, is that your neighbors may never even see your cat, while many people worry about the smell and noise of chickens.

Rob Ludlow of BackyardChickens.com thinks these concerns aren’t usually relevant to the small size of the average backyard flock. After all, he says, “What if everyone thought owning a dog in your backyard would smell and sound like a dog kennel?”

Still, neither dogs nor chickens are silent, so consideration is important. Roosters make most of the noise and aren’t legal in most places, so be aware that if you decide to start with chicks, the sexes can’t always be distinguished at birth. You can avoid this problem by getting adult hens, or make sure you get a breed where the sex differences are obvious.

“There are about four or five breeds out of 200 or 300 that can be sexed at birth, just by looking at the color,” says Tyler Phillips of Rent A Coop in Potomac, Md.

Even hens, however, can turn out to be more talkative than expected, as Lisa Sandbank of Santa Monica, Calif., found out.

“People said, ‘Oh, when they lay an egg, they do a little thing’ ... but it’s longer and louder than I imagined,” she says.

Both Schmidt and Sandbank say their neighbors report hearing the chickens, although some claim to enjoy the sound (and the regular gifts of eggs they receive to help keep the peace).

Schmidt started out with one of Phillips’ rental coops, which she planned to return if the neighbors complained. About half a dozen such businesses across the country have opened in the last few years, so this kind of trial chicken-keeping is a growing option.

Besides neighbors, there are other chicken-keeping issues to consider. Be aware that chickens:

might not mix well with your current pets. Schmidt knew she couldn’t have chickens with the dog she used to have, and Sandbank had to gradually and carefully introduce her chickens and her cats.

need to be cared for whatever the weather, and when you go on vacation. Schmidt’s coop from Rent A Coop is portable and fits in a minivan, so she took it to a friend’s house before a recent trip. But for a conventional coop, you’ll need an agreeable friend or a pet-sitting company.

produce fertilizer and eat bugs, but also have less beneficial effects on your garden. “One thing I didn’t anticipate is that they like to scratch in loose dirt,” Schmidt says. She’s had to add stones or chicken wire to some beds to prevent digging.

require qualified vet care, which may be hard to find. Sandbank’s one experience with an avian vet was less than satisfactory, and Phillips suggests going first to experienced chicken-keepers online for tips to pass on to any vet that you consult.

Finally, if you decide that chickens will fit into your lifestyle and your neighborhood, there’s one big long-term issue to consider: Hens don’t lay eggs their whole lives.

What you do when they stop may depend on why you’re keeping them in the first place.

For Schmidt, who used to be a vegetarian, part of her motivation is to educate her children in the reality of food production.

“I don’t know whether I’ll really do it or not, but from the beginning I’ve told the kids that when the chickens get too old to lay, we might eat them,” she says. “I don’t know if I could go through with it myself, but I might give them to someone else.”

To others, chickens are mainly pets; Sandbank’s partner doesn’t even eat eggs.

“The eggs are not the point,” she says. “They’re our pets now, and they always will be. The eggs are a gas, they’re fun, but I like giving them away more than eating them.”

Downplaying the eggs also makes sense when you consider that with the initial expense of setting up a coop, the eggs are, in fact, no bargain.

“Once you’ve got it going, it’s economical, but the initial expense of the coop and the chickens blows that all out of the water,” Schmidt says. “They’re the most expensive eggs you’ve ever eaten.”

Colchester, Vt. - Linda Gertrude Perreault, age 84, the daughter of Paul C. and Mazie R. Hitchcock of Haverhill, Mass., passed away on October 12, 2020 in Colchester, Vt. A longtime resident of Amesbury, Mass., she enjoyed retirement in Port Orange, Florida prior to returning in 2010. She wa…