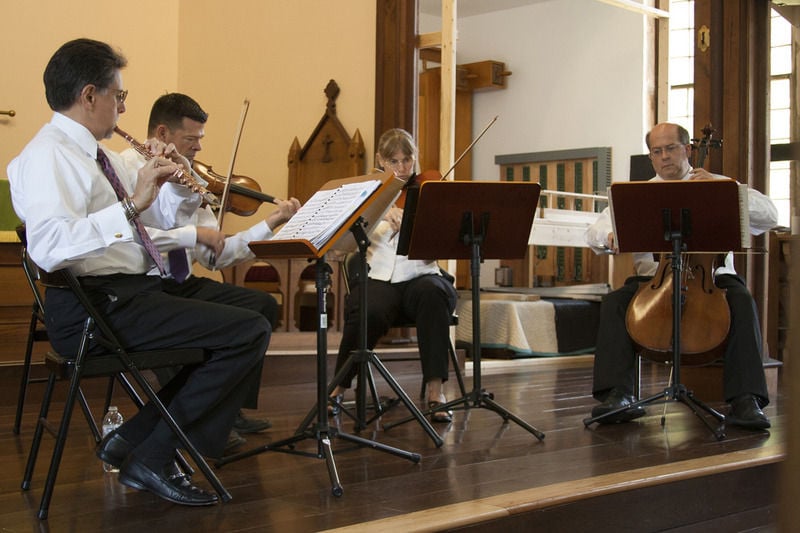 The Olmsted Ensemble will perform this Sunday at the First Religious Society in Newburyport. It is the first concert of the 2014 Jean C. Wilson Music Series. From left are Peter Bloom, Brian Clague, Jennifer Shallenberger and Timothy Roberts. 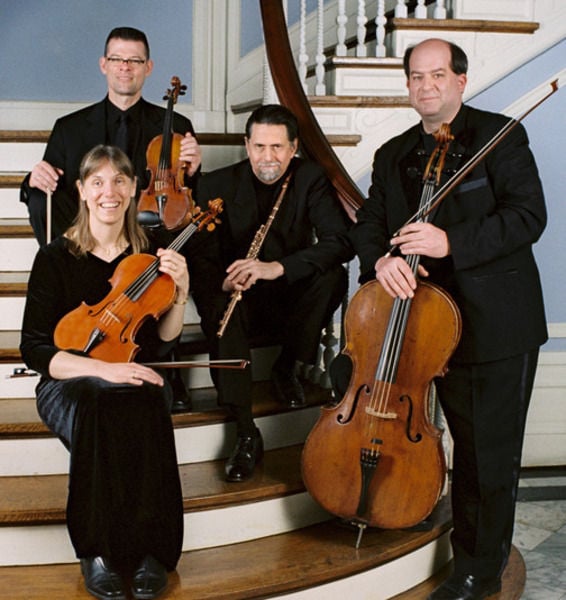 The Olmsted Ensemble will perform this Sunday at the First Religious Society in Newburyport. It is the first concert of the 2014 Jean C. Wilson Music Series. From left are Peter Bloom, Brian Clague, Jennifer Shallenberger and Timothy Roberts.

When the Olmsted Ensemble officially formed around seven years ago, it needed a name. So the quartet turned to a highly regarded historical figure for inspiration.

Although he is probably best remembered as the landscape architect who designed New York City’s Central Park and Boston’s Emerald Necklace, Frederick Law Olmsted was also a journalist who documented the slave economy for The New York Times. And he was the executive director of the U.S. Sanitary Commission, the predecessor to the American Red Cross.

“He was a great American and a chronicler of things American, and our group likes to perform American composers from that period of Olmsted’s life, and we like to perform 19th-century music that Olmsted might have heard,” flutist Peter Bloom said. “We think his name should be remembered.”

“Little is known about him, and his music was only published recently,” Bloom said. “He is just one of the composers who was never published and was overlooked. It would really put American composers in higher esteem if he were included.”

During its concert Sunday afternoon at the First Religious Society in Newburyport, the Olmsted Ensemble will perform Hommann’s Quartet in D minor.

“There are sections of it that sound like a Hollywood film score,” Bloom said.

Florence Mercer of the Jean C. Wilson Music Series Committee, which organized the concert, said she is looking forward to the Hommann piece the most.

“I’m really eager to hear that,” she said. “To hear music that you’ve absolutely never heard before, that’s great.”

The program will also include Quartet Opus 41, No. 2 in F major by Ignace Pleyel, who was a favorite student of Haydn and an important influence on Mozart, and Quartet No. 1 in D minor by Juan Crisostomo Arriaga.

The concert will end with a beloved piece by Mozart himself, Flute Quartet No. 1 in D major.

“This is the jewel in the crown of his quartets,” Bloom said. “We’ve been performing it together, and we never get tired of it. It’s one of those pieces that flutists work on it in early years and keep finding things in it throughout our careers.”

Sunday’s program is one that the Boston-based Olmsted Ensemble, which also includes violinist Brian Clague, violist Jennifer Shallenberger and cellist Timothy Roberts, has performed many times.

“People should be expected to be surprised by the passion and flair of the repertoire and how much fun it is,” he said.

Although members of the ensemble have played with other groups as part of the Jean C. Wilson Music Series before, this is the first time they will all perform together at the First Religious Society.

“People are eager to play in the Unitarian church,” Mercer said. “They love the sound in there.”

Jean Wilson, for whom the chamber music series is now named, was one of the founders and the director of the concerts for 28 years.

When the performances started in the early 1970s, “Newburyport was in kind of a slump,” Mercer said.

“Jean just felt that there ought to be live music in Newburyport, especially during the horrible winter months,” Mercer said.

Sunday’s concert is the first of three in the 2014 series. Upcoming performances are “Music for the Organ and Strings” on Feb. 23 and the Boston Chamber Music Program on April 6.

How much: Suggested donation of $20 for adults, $10 for seniors. Free for students and children.