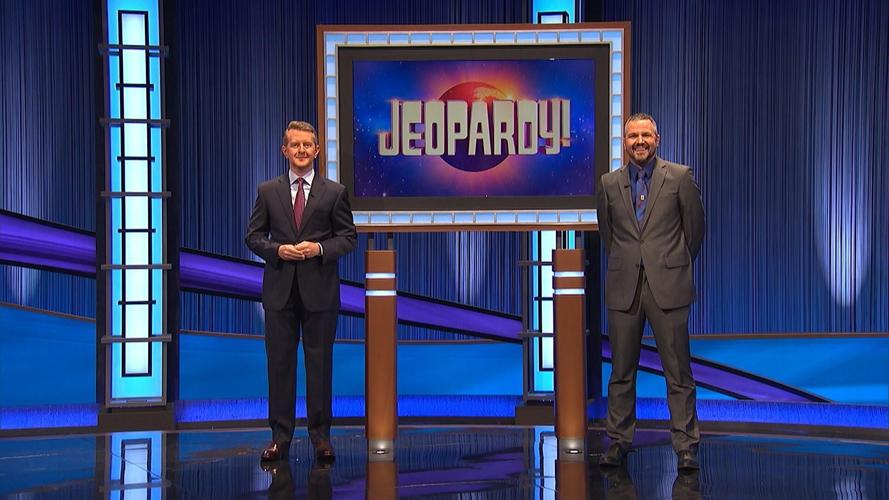 From left, Jeopardy! host Ken Jennings and Derry native Mike Elliott, who appeared as a contestant recently on the popular television game show. 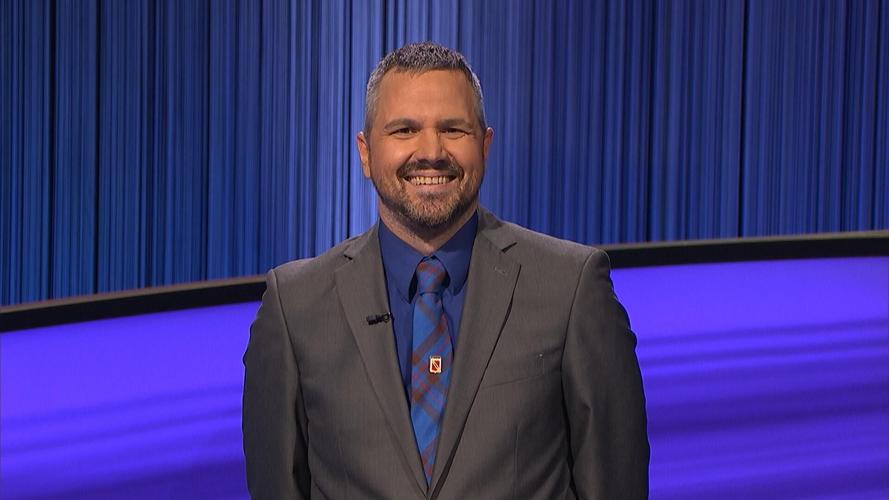 Mike Elliott achieved a longtime dream of being on Jeopardy! by competing recently on the show. Elliott came in second to defending champion Cris Pannullo.

From left, Jeopardy! host Ken Jennings and Derry native Mike Elliott, who appeared as a contestant recently on the popular television game show.

Mike Elliott achieved a longtime dream of being on Jeopardy! by competing recently on the show. Elliott came in second to defending champion Cris Pannullo.

DERRY — Mike Elliott, a 36-year-old grocery store meat cutter from Derry, achieved a lifelong dream this week by appearing as a contestant on "Jeopardy!"

He placed second in his game, falling to defending champion Cris Pannullo. Elliott made for a nail-biting finish when he wagered his total earnings in the Double Jeopardy! round.

He’ll be haunted by not buzzing in first on a clue in the “Broadway Rocks” category, losing out to contestant Marsha Free about a favorite rocker.

“I really wanted that Bruce Springsteen one because I’m a huge fan,” he said.

Despite the game’s outcome, Elliott counts the experience as a win, and one that he’s thought about since he was five years old.

Jeopardy! is a show his family enjoyed together. As he got older, he’d hone his quiz skills, battling it out against his sister and neighborhood kids on Nintendo’s Jeopardy! game.

Elliott says trivia has been a strong suit for him. At Pinkerton Academy, he participated in the Granite State Challenge, a long-running PBS quiz show. He would later compete in campuswide quiz bowls at the University of New Hampshire.

Friends and family now call on him for trivia nights.

He auditioned for "Jeopardy!" a few times in college and says he would take the online test year after year in hopes of a callback.

Elliott missed one opportunity to audition only because he was on his honeymoon.

This latest opportunity aligned perfectly, and he was ready to make the most of his shot.

He practiced his timing before heading to California by taping old shows and using the pause button on his television remote to “buzz in.”

Elliott reminisced about a high school competition when his buzzer didn’t work. It wasn’t going to happen this time.

He flew out to Culver City, near Los Angeles, for two days in August, feeling prepared for the taping.

While waiting as a show alternate, Elliott sized up his competition, realizing he’d likely face Pannullo — unless someone else knocked him out.

Elliott gave the reigning champion a run for his money.

Finding the last daily double was a moment he’ll never forget at a point in the match where Elliott was losing ground.

Part of his preparation was determining his game-play approach and what he’d do against a high stakes player.

He knew he’d aggressively have to take chances too.

“That was part of the plan with the all-in bet on the daily double,” said Elliott.

He recalled a phone call with his dad before he left for the show’s taping. He told his father he was nervous about what would happen if he didn’t win.

“He said, ‘Mike, I just want to hear you say, let’s make it a true daily double.’ I was thinking of my dad as I was doing that.”

His father’s image also crossed his mind on the Hollywood set.

“It felt like I was at Fenway Park or Gillette Stadium when I hit that daily double,” Elliott said when he got the clue right.

He says his time on the half-hour show was a “zen experience.”

“It was me, my podium, the board and (Host) Ken (Jennings),” Elliott said. “I blocked out everything else except for that daily double moment.”

He added, “It was surreal from the time my plane landed to everything since. This whole experience has been like living a dream.”