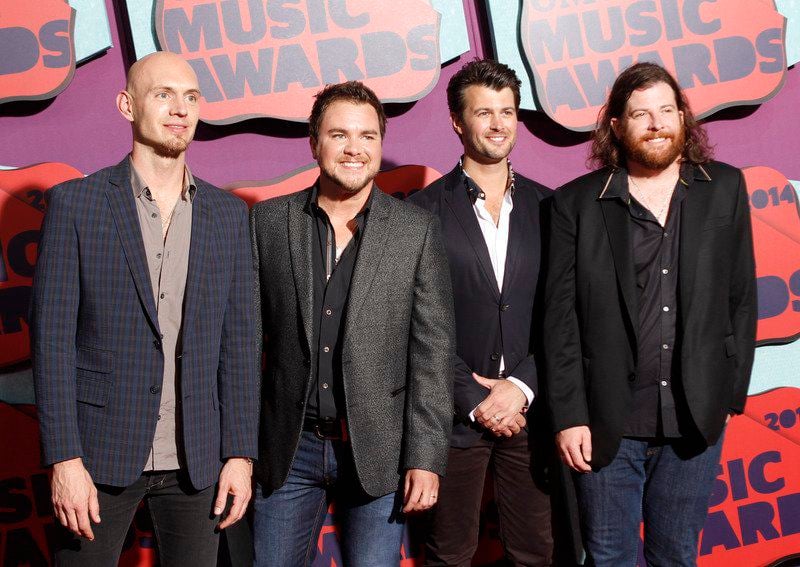 From left are Jon Jones, Mike Eli, Chris Thompson and James Young of the Eli Young Band. Jones hopes to hit the stage again in June to launch a new drive-in concert series in his first return to live music with fans present since the devastating coronavirus. (Wade Payne/Invision/AP) 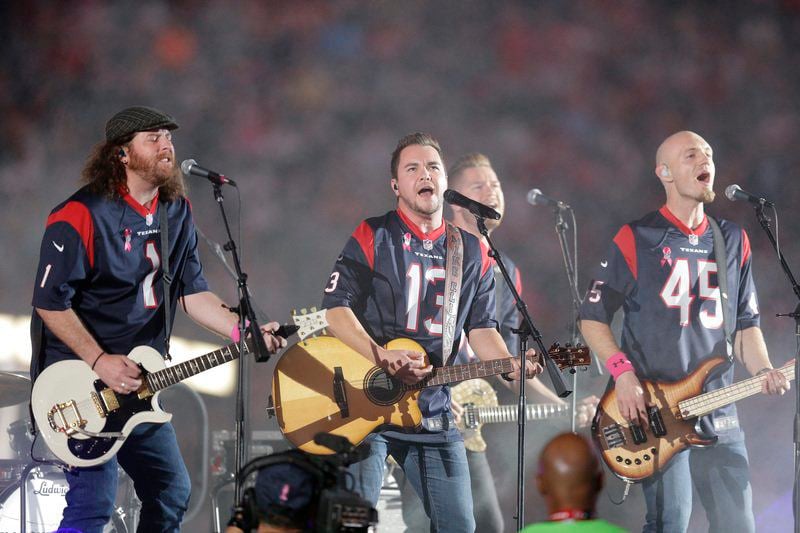 The Eli Young Band, shown performing during halftime of an NFL football game in Houston, Texas, will perform as part of the Concert in Your Car series at the new Texas Rangers stadium. (Patric Schneider/Associated Press)

From left are Jon Jones, Mike Eli, Chris Thompson and James Young of the Eli Young Band. Jones hopes to hit the stage again in June to launch a new drive-in concert series in his first return to live music with fans present since the devastating coronavirus. (Wade Payne/Invision/AP)

The Eli Young Band, shown performing during halftime of an NFL football game in Houston, Texas, will perform as part of the Concert in Your Car series at the new Texas Rangers stadium. (Patric Schneider/Associated Press)

The last time that bassist Jon Jones played a concert with his country group Eli Young Band was March 8. He hopes to hit the stage again in June to launch a new drive-in concert series in his first return to live music with fans since the devastating coronavirus.

“This is going to be a surreal kind of setting,” Jones said of plans to play acoustically to 400 cars full of people at the new Texas Rangers stadium in Arlington, Texas.

As states start to let businesses reopen under limitations, music industry organizers are testing out new models of smaller, socially distant concerts. Jones is cautiously optimistic that drive-in concerts might help crack open a door for musicians that slammed shut so quickly in March.

“We’re going to be one of those last industries, those last segments that opens up, unfortunately,” Jones said. “I do hope that everybody is cautious and opens up appropriately and slowly.”

George Couri, of artist management company Triple 8 Management, teamed up with the Rangers to put on the four-night concert series called Concert in Your Car starting June 4. The interest was so high that tickets sold out quickly and additional shows were added. In all 3,200 tickets have been sold.

“It’s about creating an experience for live music again,” Couri said. “The big driver for me is to prove it can work. It would give people hope that this can be repeated again and again in many different places.”

But the path ahead for live concerts hasn’t been easy. A venue in Arkansas initially had to postpone an indoor concert that would have defied the state’s ban on large gatherings after health officials ordered the show shut down. The concert featuring singer Travis McCready went on Monday night.

Drive-in concerts aren’t new, but in the wake of the pandemic, the idea hit in Europe and now the United States. Country star Keith Urban played a drive-in theater in Tennessee last week with scaled-back production and crew, but he said that he thinks the concert industry in the near future will pivot to a drive-in style, but with larger capacity.

“The stage is going to be coming out to the parking lot and people will be staying in their cars,” Urban said. “It will be an endless tailgate party.”

In Florida, DJ D-Nice, who has been entertaining people online with his popular DJ sets on Instagram called #ClubQuarantine, played music for first responders in their cars on Saturday.

Concert promoter and venue operator Live Nation is planning to test fanless concerts, drive-in concerts and “reduced capacity shows" both indoors and outdoors, according to President and CEO Michael Rapino, who spoke about the ideas on an investor call.

Tailgate Fest in California already proved the car-centered concert was a viable option before the pandemic. The country music festival where fans are encouraged to watch from their RVs, trucks or cars is going into its third year this August.

Melissa Carbone, the CEO of Tailgate Fest, said there are a lot of changes coming to the festival this year because of the coronavirus, including removing a general admission pit area and a VIP pool party, and they are expecting attendance to drop from last year's high of 25,000. But the lineup of Dierks Bentley, Lynyrd Skynyrd and TLC hasn't changed as of yet.

“We're ahead of the curve on it, and nobody wants to see live music go away,” Carbone said.

The World Health Organization has guidance and risk assessments for mass gatherings during the COVID-19 outbreak, said Lucia Mullen, an analyst at Johns Hopkins Center for Health Security and part of the WHO's expert cell for mass gatherings and COVID-19.

For concerts, Mullen said recommendations included moving events outdoors, limiting attendance, spacing people out, taking temperatures of participants and staff, installing hand sanitizing stations, and implementing extra cleaning. But she said that organizers should also look at the aftereffects of holding a mass gathering in an outbreak, such as contract tracing.

“Do they know who is going there so they can follow up with them if they do find out there is a case and alert all of the participants so they can go get themselves checked out?” Mullen asked.

In a rapidly changing outbreak, Mullen said event organizers should rely heavily on the advice of local health officials in their areas.

“Mere weeks can change an epidemiological context in a city,” she said.

For most bands, touring is a large majority of their income, well above what they get for releasing albums. But Couri said this initial launch of drive-in concerts at the Texas stadium won’t be a huge money-making endeavor early on.

They are charging $40 for each car, and all tickets have to be purchased in advance, not on-site. No concessions or merchandise will be available for sale to reduce contact between people. All bands will play acoustically, so there’s minimal production crew needed. There won’t even be outdoor speakers because the music will be transmitted by radio.

Jones said for him and the members of Eli Young Band, they aren't doing the drive-in concerts solely to make up lost income, but instead to give music back to the fans.

“I think people need something safe that they can go do, and if we can be that, that's awesome,” Jones said.

Concert in Your Car: http://www.texasrangers.com/concertinyourcar