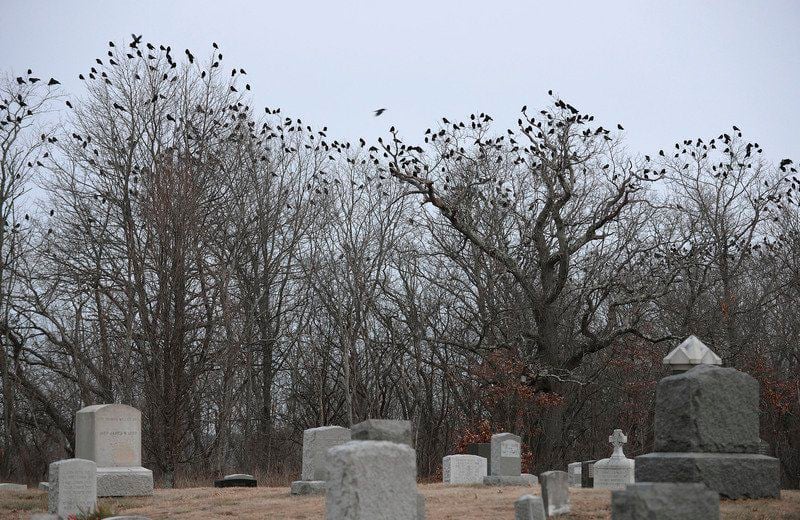 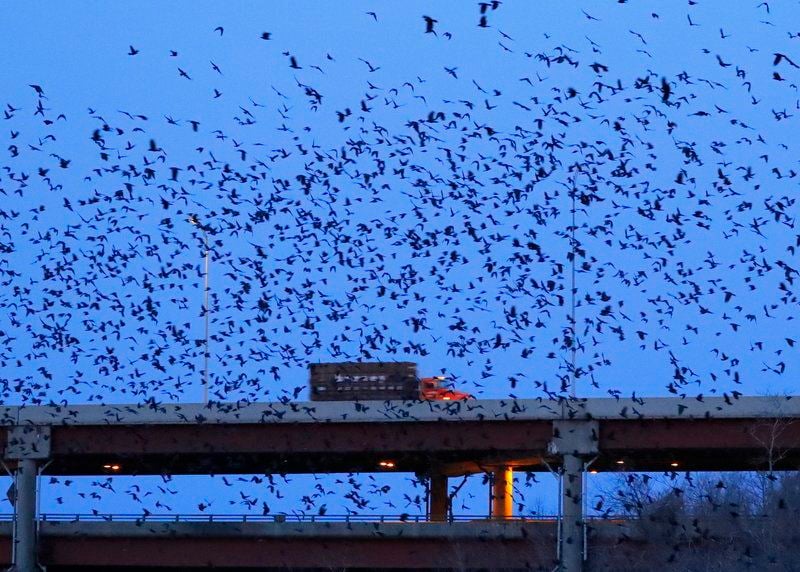 Craig Gibson/Courtesy photoA truck driver on the Interstate 495 bridge over the Merrimack River in Lawrence gets an eyeful from the roost of 15,000 crows that winters nearby.  Members of the local Crow Patrol group regularly perch on the riverbank and observe the birds. 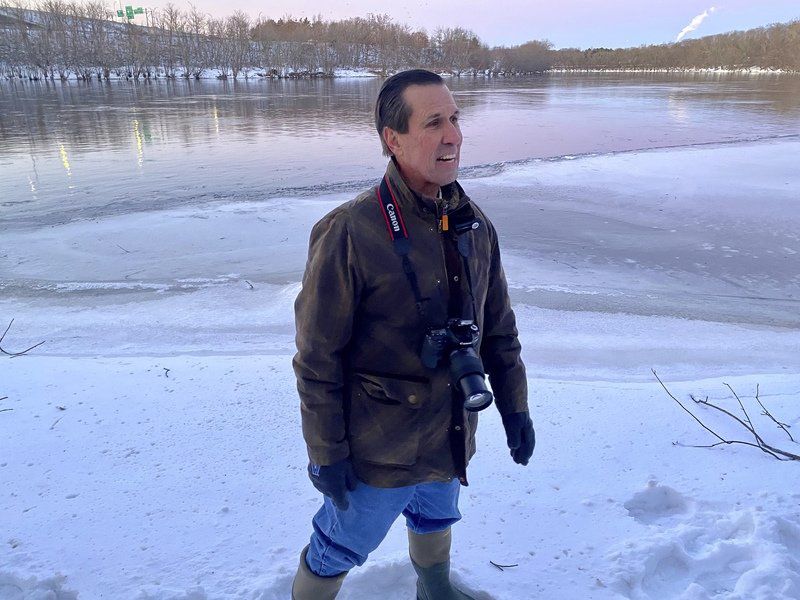 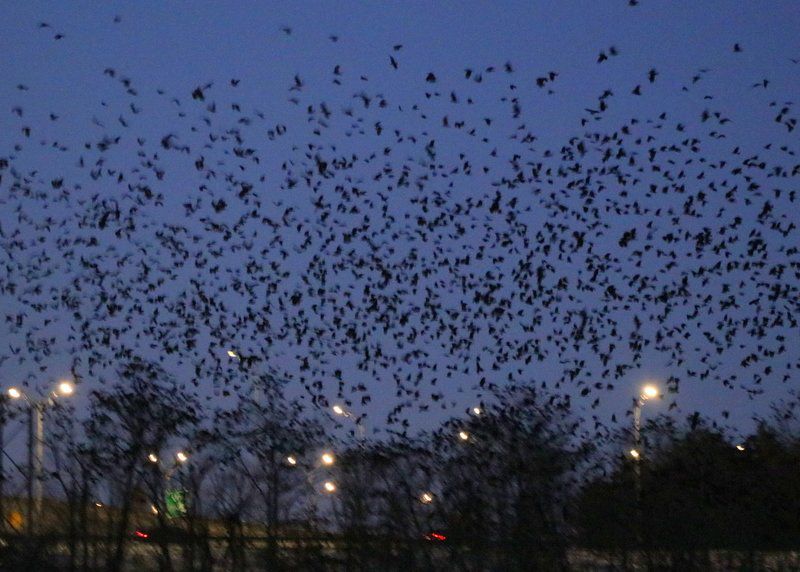 Craig Gibson/Courtesy photoCrows fill the sky over Lawrence, where some 15,000 birds roost during the winter. 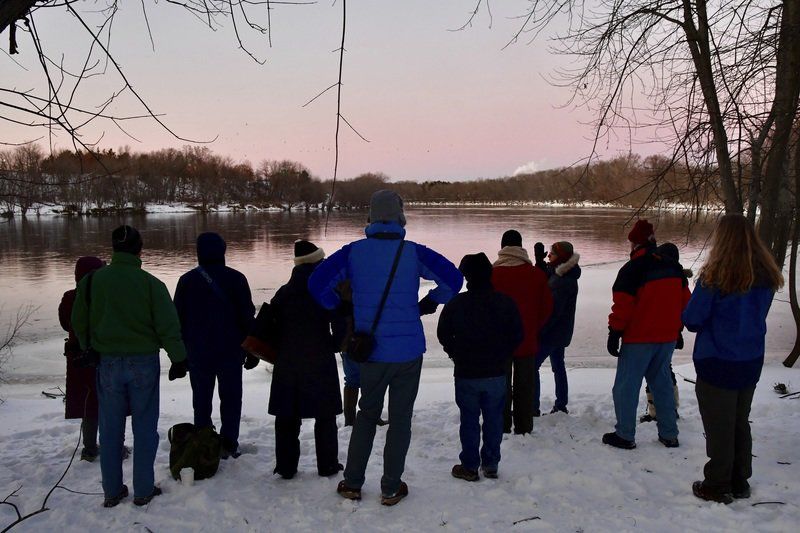 TERRY DATE/Staff photoCrow watchers await the arrival of 15,000 birds on a winter night. The birds roost in trees by the Merrimack River in Lawrence. 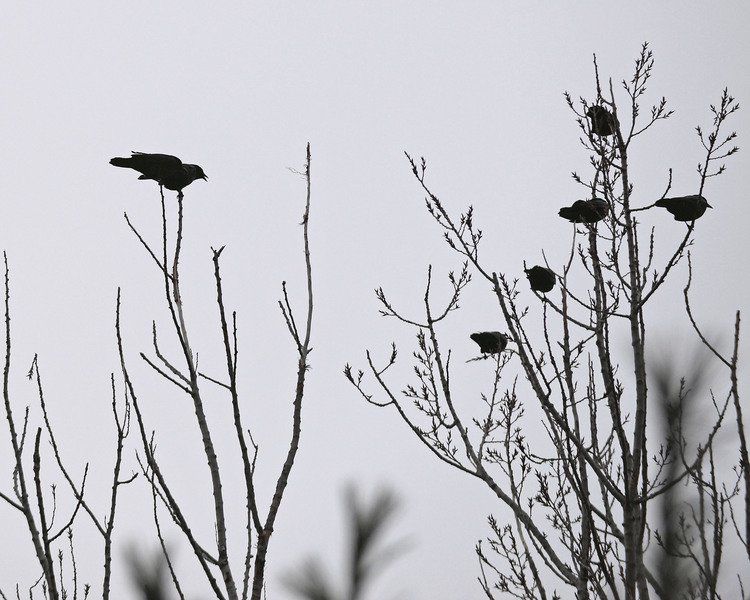 Staff file photoCrows have been roosting along the Merrimack River in the winter since the 1980s.

Craig Gibson/Courtesy photoA truck driver on the Interstate 495 bridge over the Merrimack River in Lawrence gets an eyeful from the roost of 15,000 crows that winters nearby.  Members of the local Crow Patrol group regularly perch on the riverbank and observe the birds.

Craig Gibson/Courtesy photoCrows fill the sky over Lawrence, where some 15,000 birds roost during the winter.

TERRY DATE/Staff photoCrow watchers await the arrival of 15,000 birds on a winter night. The birds roost in trees by the Merrimack River in Lawrence.

Staff file photoCrows have been roosting along the Merrimack River in the winter since the 1980s.

So many crows. So many questions.

It’s a bone-chilling sunset in January, and 15 men and women, their boots anchored to the snow-covered riverbank, are taking in a spectacle.

They watch 15,000 cawing crows breaking into smaller groups and “leapfrogging” among trees.

Why this knocking around in cliques before settling in for the night — all together — at a final roosting spot along the Merrimack River?

Christian Rutz, a biology professor visiting from St. Andrews University in Scotland, wonders about this.

And why do the Lawrence crows, on occasion, switch to a new overnight roosting spot?

And, more broadly, what brings the crows here?

The Lawrence winter roost has been going on for decades, back to the 1980s, said Craig Gibson, a Roman Catholic chaplain at Lawrence General Hospital and dedicated crow watcher.

Before daybreak, they take wing with a few friends and explore locations within about a 20-mile radius, including Plum Island.

At sunset, they return to Lawrence.

This natural phenomenon of crows roosting in cities for the winter plays out across the country.

Rutz has studied crows worldwide and is especially interested in the New Caledonian crow species and its tool use: They habitually hook twig ends and fish insects from tree crevices.

Tonight, though, his fascination is reserved for all these Lawrence birds — American crows, mostly, some fish crows in the mix.

Here, he sees more crows gathered in a single place at one time than he has ever seen in his life.

As a scientist, he is interested in patterns and investigating them to find larger truths.

“What makes that location valuable, and why do they do that leapfrogging?” Rutz wondered aloud in a talk later at the Essex Art Center in Lawrence.

The overnight roosting spot, in trees under the well-lighted Interstate 495 bridge, was deemed the most desirable by the crows, he said.

But why didn’t they plunk down on the valuable real estate immediately?

The crows have roosted there overnight for the last nine weeks and earlier this season were in other locations along the river, Gibson said.

Roughly, they are here from late October to March.

In addition to watching crows, Gibson is a crow photographer, crow blogger and organizer for a group called the Crow Patrol, which observes the Lawrence winter crow roost along the Merrimack River.

The patrol’s inaugural season was 2017-18, started by Gibson and husband-and-wife team Bob Fox and Dana Duxbury-Fox.

In the winter of 2018-19, they observed, monitored, documented and photographed the crows most every night.

This season, Gibson has already logged more than 60 observation nights, with an eye on staging and roosting patterns.

He recently visited crow experts in New York, including professors Kevin McGowan at the Cornell Lab of Ornithology and Andrea Townsend at Hamilton College, to learn what crow topics they are studying.

Research by Townsend and others on winter crow migration to roosting sites — study that used genetics and satellite tracking — determined that 20 percent of the crows came from local populations and 80 percent from 100 to 500 miles to the north, he said.

Gibson organized the recent local crow watch behind Sutton Street in North Andover, looking across the Merrimack River toward Lawrence.

As light drains from the sky, the crows engage in their strange, wobbly square dance.

Groups of several hundred pour from branches like pepper and gyrate in the air only to land in a host of trees, bouncing from one to another.

“A do-si-do,” one onlooker, Cynthia Brown, of Ipswich, calls it.

“Here they come,” Gibson announced, pointing to the latest arriving wave of crows.

Among the watchers was Ray Brown from the radio broadcast “Talkin’ Birds.”

Brown, who has witnessed the annual spring migration of a half-million sandhill cranes along the Platte River in Nebraska, is wowed by Lawrence’s winter roost.

And here is a Lawrence man, Paul Dunphy, who enjoys seeing the crows. He’s proud they have chosen Lawrence.

Crow culture is hopping in the Immigrant City.

Essex Art Center has three exhibits on the winter roost, all running through March.

The Boys & Girls Club of Lawrence is for the second year, in tandem with Phillips Academy, hosting crow art and writing programs. Nonprofit Groundwork Lawrence is launching a student, citizen-science project.

And Lawrence’s Spicket River Brewery has created a dark beer, Crowpacalypse, to celebrate the birds.

To deepen interest in the winter roost from a scientific perspective, Rutz suggests low-cost investigations to learn about leapfrogging and crow movements  — where the birds came from and where they go — and crow relationships.

“That would be a fantastic research challenge to find out who knows who,” he said.

He suggests recording crow vocalizations in the roost to help understand what the birds are communicating. Gathering feathers and pellets for genetic mapping would help, too. (Gibson has already done some of this and sent the feathers to a lab for DNA testing.) And attaching radio tags to a few birds for tracking them would be another effective tactic.

Research in Europe has identified a behavior called “tethering” within large crow groups. It describes how two or three birds stay relatively close to each other.

Crow proximity may correlate to familiarity and scale up from family to local populations, Rutz said.

“A few hundred birds that suddenly move, those may be birds that are familiar with each other,” he said.

The birds that resist joining them may be from distant populations.

The intrigue and sheer mass of swirling black birds makes crow-watching an adventure that connects birds and humans.

“I think that it is absolutely fantastic that Craig and his group are involving the local community in sharing and enjoying this, rather than perceiving these birds as a nuisance as they are in many parts of the world,” Rutz said.

Gibson will provide an update on the 2020 roost at Essex Art Center on Sunday, Feb. 23, as part of a sold-out event also featuring a gallery tour and field trip to see the crows.

Joppa Flats Education Center on Plum Island is also hosting an event, “A Cacophony of Crows in Lawrence,” this weekend, but that has sold out, as well. To get on the waitlist, email joppaflats@massaudubon.org or call 978-462-9998.

For more information about the winter crow roost, visit www.wintercrowroost.com.