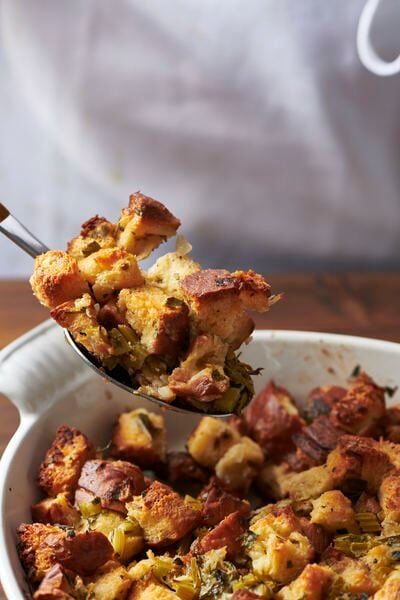 Your recipe for traditional Thanksgiving stuffing can be cut in half and baked in a smaller pan for less time for a smaller group. (Katie Workman via AP) 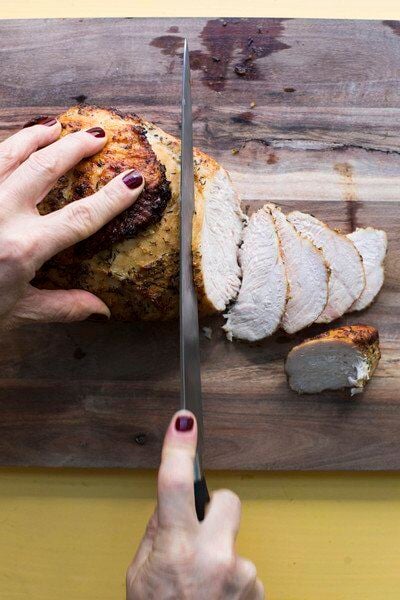 Roasted turkey breast is perfect for serving a smaller group on Thanksgiving. (Katie Workman via AP)

Your recipe for traditional Thanksgiving stuffing can be cut in half and baked in a smaller pan for less time for a smaller group. (Katie Workman via AP)

Roasted turkey breast is perfect for serving a smaller group on Thanksgiving. (Katie Workman via AP)

If you’re planning a smaller Thanksgiving gathering this year because of social distancing, you don’t have to give up the turkey, stuffing, pie and other traditional fare.

Thanksgiving feasts have typically been tailored for a crowd: big birds, large casseroles and so on. Your favorite recipes might serve 10 or more. But from turkey breasts to muffin-tin pies, there are ways to adapt the classics for a smaller crew, with less expense and potential for waste.

“Strangely, in the past, this time of year seemed challenging because we were trying to feed so many," said Rebecca Miller Ffrench, a food writer and founder of The Upstate Table, a culinary studio in Kingston, New York. This year, “we are trying to feed fewer, and it may prove equally difficult, emotionally if not physically."

Many families already branch out to include main dishes other than turkey for Thanksgiving, and this could be a good year to have fun with alternatives. But if tradition beckons, as it does for most, here are some tips.

Most birds sold for Thanksgiving dinners in U.S. supermarkets have traditionally been in the 16-pound range, with some much larger. That size turkey will serve 12 to 16 people. As a rule, when buying turkey, aim for about 1 pound per person when purchasing a whole bird; when cooking a smaller bird, especially if you want leftovers, aim for about 1.5 pounds per person.

So a 10-pound turkey might by OK for a group of eight, feeding your gang generously. But if your group is much smaller, think about buying just a turkey breast, say, and a couple of drumsticks.

First, you might serve fewer of them. Miller Ffrench said that one of her favorite things about Thanksgiving has been “all the large variety of dishes, which just seems ridiculously decadent" now.

Instead of a table overflowing with food this year, she will spotlight each family member’s favorite dish. And that's all.

"Just one kind of cranberry, not two. Just squash, and not sweet potatoes, as well," she said. "I hope we will take the time to relish each bite more, really focus on the individual flavors of each food, not the collective mounded plate."

“These past months have taught me to truly savor things more, figuratively and literally," she said.

Many recipes can be halved: roasted butternut squash, mashed potatoes and Brussels sprouts are all good examples.

If you have a recipe for stuffing that calls for a 9-inch-by-13-inch pan and feeds 10-12, you can cut it in half and bake it in a 9-inch-square pan. Reduce the cooking time by about 25%: When it’s browned and crispy on top and hot throughout, it’s done. Same thing for sweet potato casserole or green bean casserole.

Chef Maya-Camille Broussard, owner of Justice of the Pies bakery in Chicago, has some ideas for that most important category of Thanksgiving desserts: pies.

What if you'd like more than one kind of pie, but multiple 9-inch pies feel excessive?

Broussard suggests making galettes, mini pies in a muffin pan, or even whoopie pies in your favorite flavors. She also has small Le Creuset pots that she uses all the time to make individual pies.

“You may use a biscuit cutter to make small crust circles,” she said.

Or turn a coffee mug or a glass upside down, dip the lip in flour, and use it to cut out a circle of dough.

If you decide to make one of those smaller pies or muffin-tin pies, remember to reduce the cooking time. You might need to just rely on your eyes and nose for how long to bake them. Look for a browned crust; a slightly bubbling interior (if it’s a fruit pie); or a mostly firm filling (if it's a pumpkin custard pie, for instance).

“Pies usually have a high moisture retention, and they freeze incredibly well," she said. “Pies are typically good in the fridge for one week and in the freezer for one to two months.”

Fruit pies freeze especially well, she said. Thaw one on the countertop and then “pop it back in the oven to warm it up and revive the crust.”

Finding creative ways to use Thanksgiving leftovers has always been an issue, this year even more so.

Leftover squash can become a puréed soup; turkey a pot pie and a pozole soup. Mashed potatoes might top a shepherd’s pie later in the week. And everyone looks forward to a day-after-Thanksgiving turkey sandwich, maybe topped with extra cranberry sauce and a drizzle of gravy.

Miller Ffrench suggests freezing gravy flat in freezer bags and using it alongside a grilled chicken breast, or to enhance a pot pie base.

Another smart tip: “Slices of pumpkin pie are a delicious addition to any smoothie … crust and all.”

Above all, Miller Ffrench said, remember that it's not the size of the feast or the crowd that matters most: “Big or small, and most importantly, we’ll be counting our blessings."