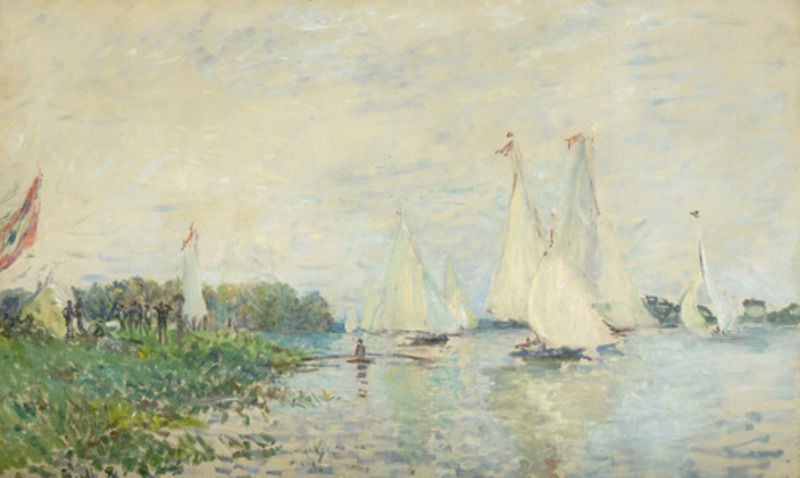 Claude Monet's "Regatta at Argenteuil" is part of the impressionism exhibit on display through Feb. 17 at the Peabody Essex Museum. 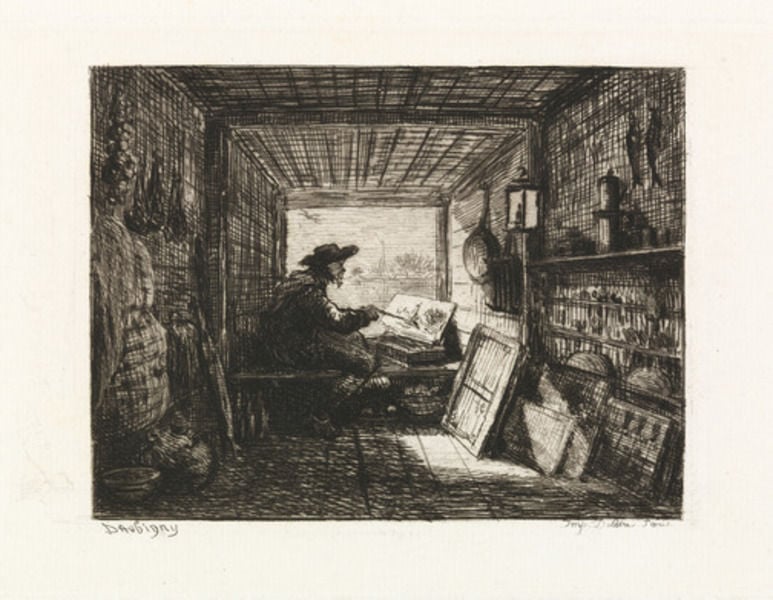 An etching by Charles-Francois Daubigny shows the artist at work on a studio boat. 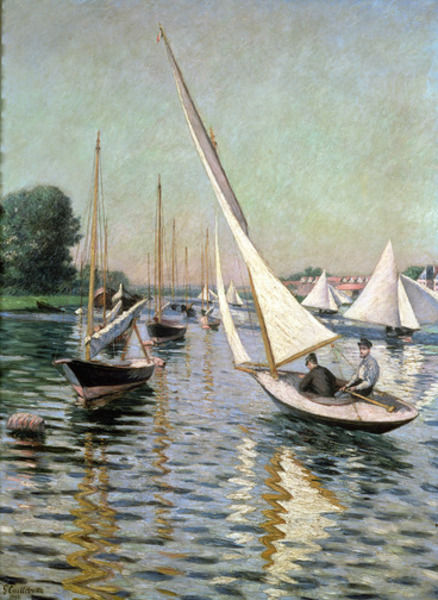 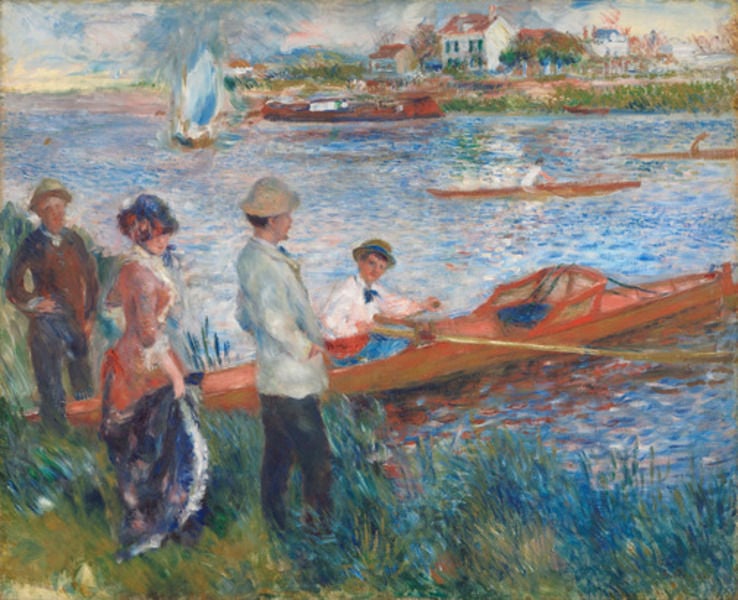 Auguste Renoir's "Oarsmen at Chatou," from 1879, is believed to depict Gustave Caillebotte on the river bank in a white jacket.

Claude Monet's "Regatta at Argenteuil" is part of the impressionism exhibit on display through Feb. 17 at the Peabody Essex Museum.

An etching by Charles-Francois Daubigny shows the artist at work on a studio boat.

Auguste Renoir's "Oarsmen at Chatou," from 1879, is believed to depict Gustave Caillebotte on the river bank in a white jacket.

Impressionism was a revolution in technique that captured the way the world is bathed in light and constructed by color.

But its practitioners were also fascinated by certain subjects, which they turned to repeatedly.

“Lily pads, haystacks, ladies in white, cafes in streetlight, theater and ballet,” said Lynda Hartigan, chief curator at Peabody Essex Museum in Salem. “I’m betting that these phrases conjure images of some of the world’s favorite and most famous impressionist paintings.”

But a new exhibit at the museum, “Impressionists on the Water,” wants to show that impressionists were equally fascinated by subjects we associate with a different kind of painting altogether.

“This is a show that is about impressionist painting, and it’s about maritime painting,” said Daniel Finamore, curator of maritime painting. “We all know that the first impressionist exhibition in 1874 was a revolution in style, a new movement in European art. But this show takes a broader trajectory, first setting the stage with European painting heritage, and in maritime art.”

Impressionism’s marine connection is established in the first gallery by Monet’s “Regatta at Argenteuil” and Armand Guillaumin’s “The Seine,” both of which appeared in the movement’s initial exhibit.

Monet’s painting is set in a town outside Paris that was a favorite destination for recreational sailors and which appears in several other paintings in the show.

“It’s an archetypal impressionist painting,” said Christopher Lloyd, co-curator for “Impressionists on the Water,” which first appeared at the Fine Arts Museum of San Francisco. “It’s a modern subject. It’s very loosely painted brushwork. You can see part of the original canvas below the surface, allowed to appear through. And it’s got exhilarating color.”

The historical background to both these works is provided in a gallery devoted to “Masters of French Marine Art,” where paintings from the 17th century communicate information about the features of ships and the harbors where they anchored.

This type of painting was familiar to the impressionists and was commissioned by French kings to help plan their navies, Finamore said.

While such utilitarian works may seem remote from impressionism, the gallery provides a bridge toward the latter style in “The Boat Trip,” a series of etchings by Charles-Francois Daubigny from 1861.

Where traditional marine painters contrived their images in a studio, Daubigny captured scenes in a realistic style while working on a boat, traveling France’s inland waterways. In the process, Daubigny, who directly influenced Monet, helped inaugurate impressionism’s preference for capturing the play of light while working en plein air, or outdoors.

Monet’s painting of his own floating studio is included in the show, and an installation in one of the galleries re-creates an artist’s boat, where visitors can look over the stern at projected video of the Ipswich River.

In addition to 60 paintings in both oil and watercolor, the exhibit includes photographs, a large number of boat models and two full-sized boats.

The models allow visitors to see how impressionists transformed what they were painting, while stressing the fact that they had specific kinds of boats in mind. Most of the artists had firsthand experience of nautical life and would have appreciated the nature and function of each vessel they painted.

Most of the galleries reflect France’s marine geography, Finamore said, grouping paintings by subject matter such as ports and harbors, or rivers around Paris.

The full-sized boats in the show include a sleek rowboat called a gig, which was owned by French novelist Emile Zola. It appears in a gallery across from a painting by Auguste Renoir, “Oarsmen at Chatou,” which depicts a gig in action.

A figure on the riverbank in the foreground of this painting is believed to be Gustave Caillebotte, who helped Zola choose his gig and is in several ways the star of this show.

In addition to being an accomplished painter, Caillebotte was an experienced yachtsman who designed his own boats and at one point ran an industrial shipyard.

In “Regatta at Argenteuil,” from 1893, Caillebotte puts one of his boat designs on display in a way that directly recalls maritime painters of the Enlightenment, who were depicting the merits of naval vessels, Finamore said.

Caillebotte’s painting is impressionistic in its use of thick impasto in the foreground, where light plays on water, and also in the way it captures side, bow and stern views of a boat in motion.

But this portrait is also bragging about the boat’s ability to capture the wind’s power while running downwind, at the same time that it is nimble enough to sail against the wind at a good clip.

“He captured those attributes of his boats which a sailor would recognize to be the sleekest,” Finamore said. “So, this is as much a claim for the excellence of his watercraft as it is a tour de force of painting.”