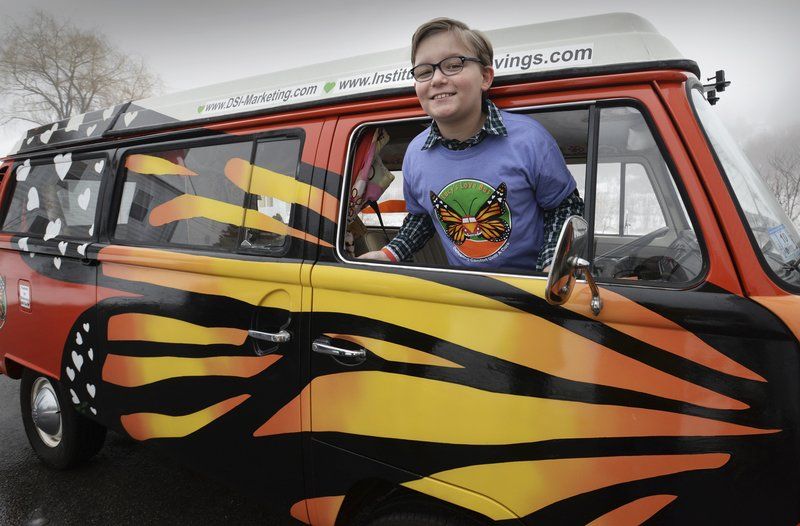 BRYAN EATON/Staff PhotoFor his upcoming birthday, David Collin, 9, of Amesbury is asking for donations to Lucy's Love Bus, a charity that helps kids with cancer, founded by Beecher Grogan, left, whose daughter, Lucy, died of the disease. 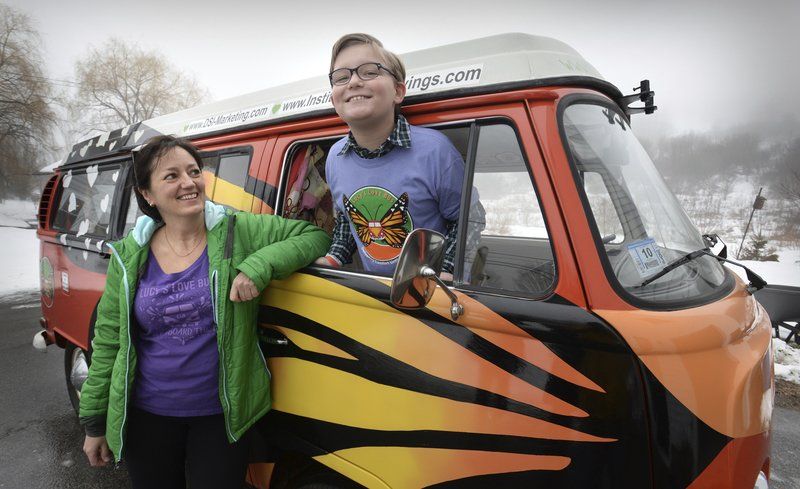 BRYAN EATON/Staff PhotoFor his upcoming birthday, David Collin, 9, of Amesbury is asking for donations to Lucy’s Love Bus, a charity that helps kids with cancer, founded by Beecher Grogan, left, whose daughter, Lucy, died of the disease.

BRYAN EATON/Staff PhotoFor his upcoming birthday, David Collin, 9, of Amesbury is asking for donations to Lucy's Love Bus, a charity that helps kids with cancer, founded by Beecher Grogan, left, whose daughter, Lucy, died of the disease.

BRYAN EATON/Staff PhotoFor his upcoming birthday, David Collin, 9, of Amesbury is asking for donations to Lucy’s Love Bus, a charity that helps kids with cancer, founded by Beecher Grogan, left, whose daughter, Lucy, died of the disease.

Raising 9-year-old twins is hard enough, but for Amesbury’s Kerri Collin, when one of them has a sense of empathy that is “definitely on overdrive,” a simple trip to the grocery store can end up costing a fortune.

“You see those kitten cans,” Collin said. “You know, like for the MSPCA, someone puts a can out? I’ll give them like 50 cents and David is like, ‘Mom ... .’ He wants to give of himself and give all of my money too.”

While Collin may have to stop taking her son David with her on errands, she is proud of the way he is growing up, even if he comes up with some wild ideas that just won’t go away, like opening a free hotel for homeless people.

“At first he was going to open up a McDonald’s for homeless people that wouldn’t have to pay,” Collin said. “Then it turned into a hotel. Then it became an everyday conversation. He would say, ‘Mom, I’m going to open up a hotel for poor people.’ And his twin sister (Jillian) would say, ‘That’s stupid. You won’t make any money.’ But he would just say it every single day.”

Figuring it was time for her son’s ideas to become more than just dreams, Collin and her son have cooked up a way to celebrate his birthday in his own unique way. They have started a GoFundMe page, which hopes to raise $3,606 to benefit a pair of Amesbury-based organizations, Lucy’s Love Bus and Our Neighbors’  Table, in honor of his 10th birthday on March 6.

“I like when other people get to have fun,” David said. “I like helping others. I like helping the world to be a better place. It makes me feel good.”

“He is on a great track, this little guy,” Grogan said. “That is very ambitious and it is wonderful. It’s $1,000-per-child for us. That is what we do for funding, so (this could be) three and a half kids right there.”

A local charity dedicated to delivering comfort to children with cancer by providing funding for free integrative therapies, Lucy’s Love Bus has helped over 500 kids since 2006 and can often be seen visiting local schools to engage young people in activism and philanthropy.

“We spend most of our time working with kids between 8 and 18,” Grogan said. “And I find, across the board, my very most passionate activists are the little ones. The 8-, 9-, 10-year-olds who I think have such big hearts but they have nowhere to focus their energy.”

Children are a force to be reckoned with and so is David, according to Grogan.

“These kids are helping,” Grogan said. “They write letters to the government talking about the inequities in funding for childhood cancer. We love when the children come to us to help other children. We’ve had kids, 3 to 4 years old, have birthday parties and they ask for donations for the Love Bus instead of gifts for themselves. No matter how big we get, it will always be a part of my mission to keep myself really accessible to these children. To show them how much they matter to us and how much they really help.”

A Cub Scout and two-time Pinewood Derby second-place winner, David likes Legos and playing with his friends. While he and his mother watch his fundraising page grow, the idea of a hotel for the homeless is not going away.

“He’s not letting that go,” Collin said. “He is already talking about doing money for a children’s hospital.”