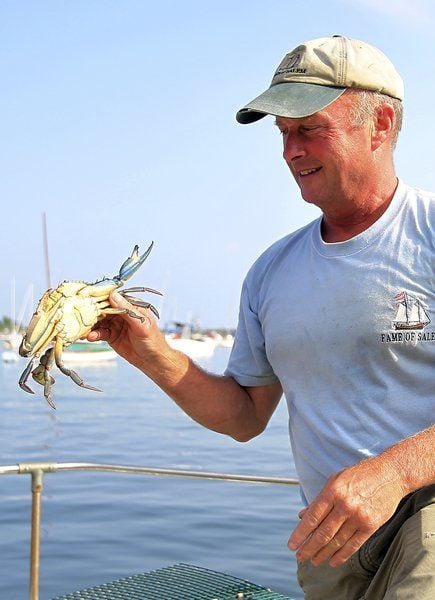 Lobsterman and diver Ray Bates, of Marblehead, holds up a large blue crab that he found this week. Bates, the Shellfish Constable in Marblehead for the past 30 years will donate the crab to the Cat Cove Marine Lab at Salem State University. David Le/Staff Photo 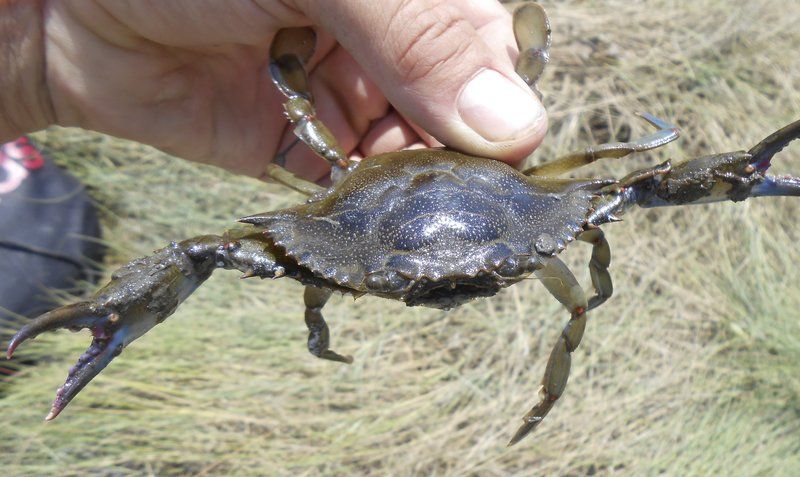 Biologist David Samuel Johnson found this blue crab in the Plum Island estuary in 2012. It started a research quest for him that recently culminated in the publication of a research paper on the northward march of blue crabs.

Lobsterman and diver Ray Bates, of Marblehead, holds up a large blue crab that he found this week. Bates, the Shellfish Constable in Marblehead for the past 30 years will donate the crab to the Cat Cove Marine Lab at Salem State University. David Le/Staff Photo

Biologist David Samuel Johnson found this blue crab in the Plum Island estuary in 2012. It started a research quest for him that recently culminated in the publication of a research paper on the northward march of blue crabs.

NEWBURY — It used to be that blue crabs were rarely found north of Cape Cod, but a new study indicates that the highly sought crab cake ingredient may be starting to migrate into the Plum Island estuary and even farther to the north.

Warming ocean temperatures are the culprit, according to the study’s author, Newbury-based biologist David Samuel Johnson.

The discovery has its roots in the summer of 2012, a year that is memorable for many who fish along the local coast. Water temperatures became noticeably warmer, and fish species that had never been seen this far north, such as bonino fish, were being caught. That summer, Johnson heard from a colleague who described seeing a crab in the marshes off Plum Island that fit the general description of a blue crab — a crab with distinctive sharp points on its shell and wing-like projections on its rear legs to help it swim.

Johnson, who specializes in the study of invertebrate animals, set out to confirm it the old-fashioned way: He waded out into a mucky creek in Ipswich and trudged along, watching for movement below.

“I saw a lot of green crabs scuttling along, and then I saw a crab swimming fast. As soon as I saw that my heart started racing,” he said. “It was the first time I had seen a blue crab in the Great Marsh.”

Johnson’s study was buoyed by a news story in an August 2012 edition of The Daily News that reported the capture of a large blue crab in the waters off Marblehead. It was discovered by the town’s shellfish constable, Ray Bates, while he was diving.

That led Johnson to find other reports of blue crabs in the Gulf of Maine, the ocean waters that stretch from Massachusetts to Nova Scotia.  He personally found four blue crabs in the Plum Island estuary section of the Great Marsh. His study was published last month in the Journal of Crustacean Biology.

Johnson’s study indicates that there is not yet enough data to definitively state that blue crabs are now permanently ensconced in this region. There have been rare instances of them being found in northern waters in the past. The first recorded instance was in 1867, when they were found in a salt pond in Salem sound. Twice — in 1902-3 and 1953 — they were found as far north as Nova Scotia. Most recently, one was found in the Sheepscot River in Maine, in 1977.

But those isolated incidents pale in comparison to what happened in 2012, a year that marked a milestone in local waters. Fishermen and marine biologists recorded a noticeable increase in ocean water temperatures, a warming trend that brought species here that had previously found local ocean waters to be too cold.

Unlike two other non-native crab species that have invaded the local coast — green crabs and fiddler crabs — blue crabs have commercial value to fishermen. They are a famously popular shellfish in the mid-Atlantic states, the signature seafood dish of Baltimore, Md. Their price per pound is on par with lobster, ranging from $3 to $6.

Their northernmost range has long been Cape Cod, and so Massachusetts regulates the harvesting of blue crabs. A fisherman can harvest up to 25 per day, though their carapaces must be at least 5 inches across. The crabs that Johnson found in the tidal creeks of the Plum Island estuary were about two-thirds that size.

The presence of blue crabs in local waters presents both positives and negatives, Johnson wrote in his study. They are a major predator of softshell clams, which is the most important fishery in the Great Marsh. But they are also a major predator of green crabs, an invasive crab that also preys heavily on softshell clams and is believed to be causing $44 million in damage to the softshell fishery per year. Johnson said there is a theory that the southernmost extent of the green crab population is located where blue crab populations are heavy.

Johnson plans to continue his research into environmental changes in the Great Marsh, which extends from Gloucester in the south to Hampton, N.H., in the north. For several years, Johnson was based at the Plum Island Long-Term Ecological Research center in  Newbury. He has recently taken a job in Virginia, but his interest in the Great Marsh remains strong.

Late last year Johnson published a paper documenting the migration of fiddler crabs into the Great Marsh. Like the blue crab, the northernmost range of fiddlers historically ended at Cape Cod, but that changed in 2012.

“The question I get asked a lot is, ‘Is this bad or good for the ecosystem?’ The answer is we’re not sure,” he said. “What we are seeing is these animals responding to a changing environment, and we can’t stop it.”