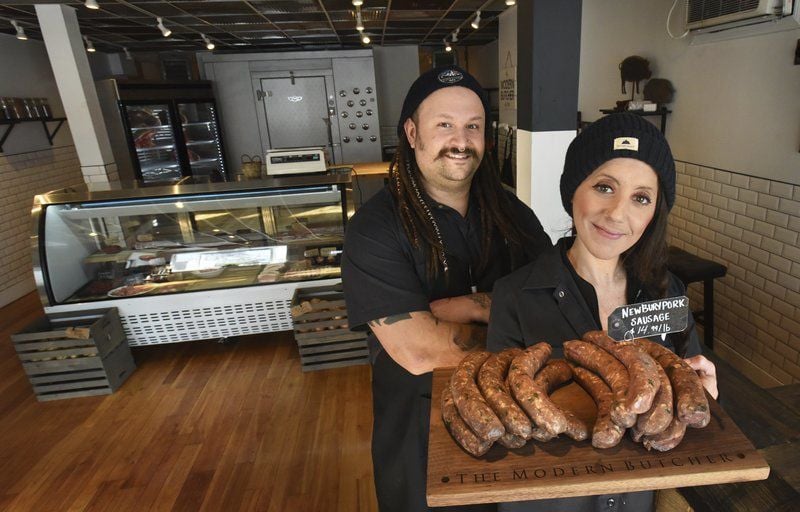 Warren Means, left, and Lisa Nichols show off the “Newburypork” sausage they sell at their new shop, The Modern Butcher on Merrimac Street in Newburyport.BRYAN EATON/Staff photo

BRYAN EATON/Staff photoThe Modern Butcher on Merrimac Street in Newburyport lists the family farms where their meat is raised. 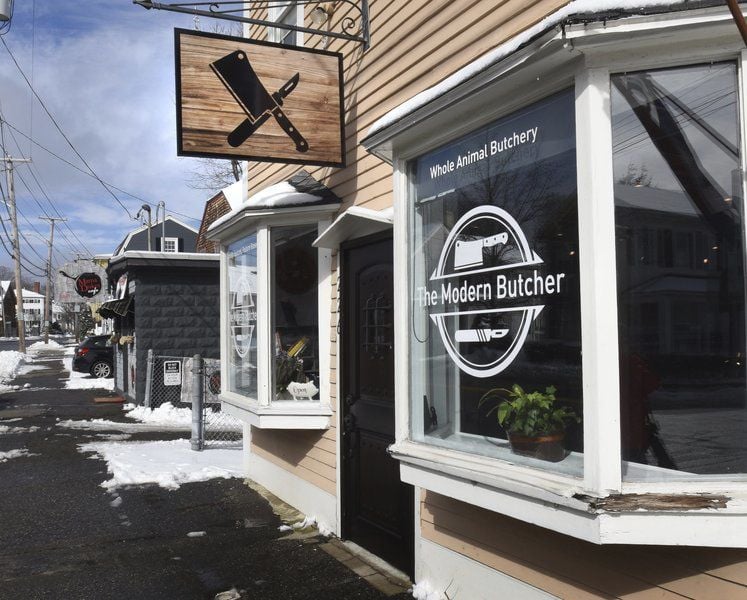 Warren Means, left, and Lisa Nichols show off the “Newburypork” sausage they sell at their new shop, The Modern Butcher on Merrimac Street in Newburyport.BRYAN EATON/Staff photo

BRYAN EATON/Staff photoThe Modern Butcher on Merrimac Street in Newburyport lists the family farms where their meat is raised.

NEWBURYPORT – If you’re in the mood for pigs feet, bone marrow, duck fat or just a great steak, the owners of The Modern Butcher suggest you head to their Merrimac Street shop.

Located next to the soon-to-be opened Mama Dukes cafe, Warren Means and Lisa Nichols opened their butcher shop Feb. 2, the day before the Super Bowl. So far, the results have been as successful as the New England Patriots, they said.

The Modern Butcher, which used to be the Warren Street Deli, is the first business venture for the Wakefield residents, who are engaged to be married.

Nichols comes from the service industry and has also spent time working at radio stations. Means worked as a pathology assistant at Boston Medical Center and private laboratories. He said performing autopsies helped his training and confidence.

“Knife skills, knife confidence,” Means said, adding that his training has allowed him to cut meat without cutting away money.

Their backgrounds were incorporated into the shop’s logo in the form of a scalpel for Means and a cleaver representing Nichols’ experience in restaurants.

“Taking care of people with food, that’s special to me,” Nichols said.

The Modern Butcher’s recent opening came almost year to the day after they signed their lease. Leading up to the grand opening Feb. 2, the two kept their jobs and sold a house as they renovated the former deli to include distressed wood and metal tiles straight from a Kentucky barn.

If the business owners were to write down their mission statement, it would be simple: Use the entire animal.

The mantra comes from their self-proclaimed love of animals and their wish to respect them. If you’re going to eat animals, they said, better to treat them with dignity and not let anything go to waste.

That philosophy can be seen in the store’s display cases and refrigerator in the form of duck fat, pigs feet and bones. While they have customers who go for those kind of products – duck fat when added to fried or baked potatoes tastes like pure gold, according to Nichols – their most popular item is sausage.

The butchers can create all types of sausage – from the popular sweet and spicy Italian variety to more eclectic choices such as butter chicken, beef taco and rabe provolone.

Means and Nichols stressed that they’re more than just a place to pick up some meat. They also want to help people make memories.

“It kind of brings back that old-school feel where we’re helping you make dinner,” Nichols said.

In addition to old standbys such as dry-aged steaks and roasts and pork chops, the store also stocks goat and duck, everything as fresh as can be.

“We don’t have a freezer for a reason,” Nichols said.