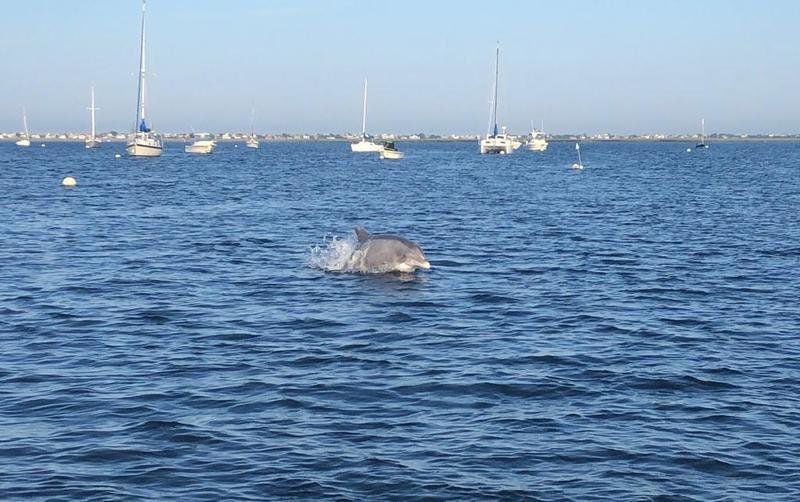 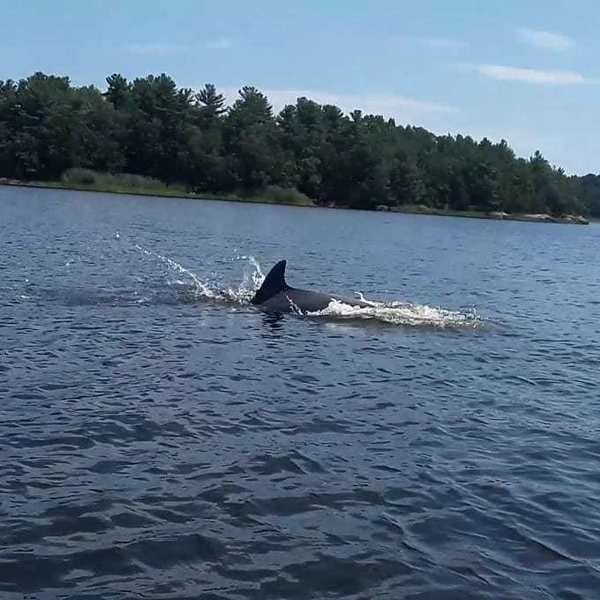 Courtesy Seacoast Science CenterThis photo, taken by Tyler Naughton, shows the dolphin diving back beneath the surface of the Merrimack. 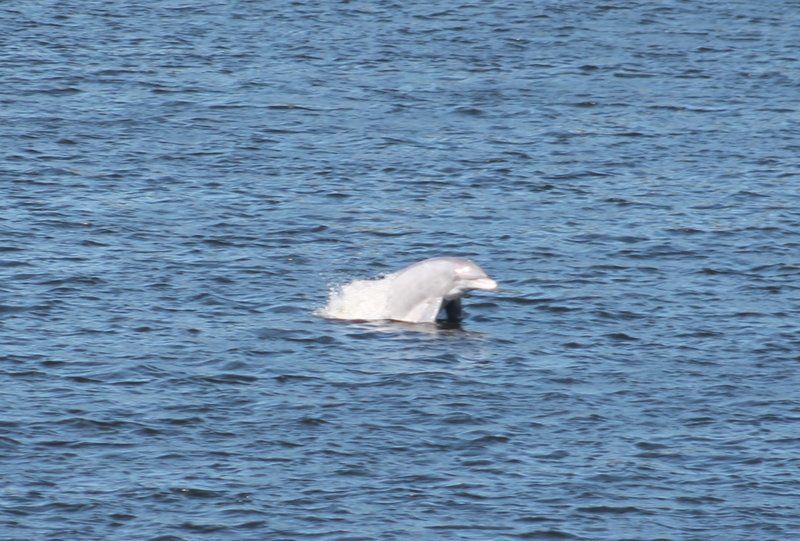 Courtesy Seacoast Science CenterThis photo, taken by Amy Warren, captures a rare sighting of a bottlenose dolphin as it leaps out of the water in the Merrimack River.

Courtesy Seacoast Science CenterThis photo, taken by Tyler Naughton, shows the dolphin diving back beneath the surface of the Merrimack.

Courtesy Seacoast Science CenterThis photo, taken by Amy Warren, captures a rare sighting of a bottlenose dolphin as it leaps out of the water in the Merrimack River.

NEWBURYPORT — Paul Piraino was searching for baitfish on the Merrimack River in Amesbury early Friday morning when a splash caught the corner of his eye. He slowed his boat to a hover, and then he saw what he least expected — the arc of a bottlenose dolphin breaching from the water's surface.

"I couldn't believe it, I thought I was hallucinating," said Piraino, a Newburyport fisherman and former charter captain who has been boating on the Merrimack since 1987.

"That was something I've never seen in this river. It looked like Flipper," he added, referring to the 1960s television show "Flipper" about a man and his pet bottlenose dolphin.

Piraino is the latest person to witness the bottlenose dolphin on the Merrimack in recent weeks, according to Ashley Stokes, marine mammal rescue manager for the Seacoast Science Center in Rye, New Hampshire. Stokes said the animal was first spotted on Aug. 16, and since then, the center has received numerous reports from boaters and bystanders along the river between Amesbury and Newburyport.

The species of dolphin primarily seen in the local area are common dolphins, Atlantic white sided dolphins, and harbor porpoises, all of which are gray and white with tan patches on their sides. The bottlenose dolphin, on the other hand, is identifiable by its large, pronounced nose and completely gray color.

Stokes said that bottlenose dolphins on the East Coast usually stay between New York and Florida, so their appearance this far north is rare, but not unheard of. She said that members of the species are occasionally known to be wayward, so this particular animal's brief sojourn in the Merrimack is not especially alarming.

"Generally they are social animals, but the fact that it does appear to be alone isn't uncommon," said Stokes. "Thankfully, it has been seen feeding in the river. We have a thick biomass of fish in the area lately, which is great."

Stokes said that based on people's reports, the dolphin seems to be traversing a stretch of the river back and forth between Newburyport and Amesbury, where it is likely following the tide to find food. And because of the dolphin's size, Stokes said, she suspects it is either a juvenile or sub-adult and is not yet fully grown, which might account for its unusual location in the river.

The Seacoast Science Center is keeping in close contact with National Oceanic and Atmospheric Administration fisheries to monitor the dolphin's activity and safety, she said, and that so far they haven't found a need to remove it from the river themselves.

"Technically, it is an out-of-habitat animal, but as of right now it appears to be acting normal. We just want to be sure that when the fall comes and temperatures drop, it moves out on its own," said Stokes.

Stokes encouraged anyone who sees the dolphin swimming in the Merrimack to call the Seacoast Science Center's Marine Mammal Rescue Hotline at 603-997-9448, and to report the exact date, time and location of the sighting, and to provide photos if possible. The reports, she said, will help the center make sure the dolphin is behaving normally.

"If people are boat-based and they see it, we're encouraging people to follow (federal) regulations and don't follow it around. That can be very stressful on them," Stokes added.