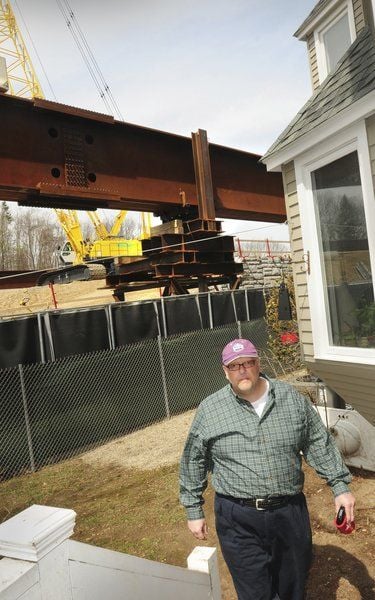 File Photo. In this 2014 photo, Scott Taylor heads up the back deck of his Amesbury home adjacent to the construction of the new Whittier Bridge. The Taylors have since moved out of the home. 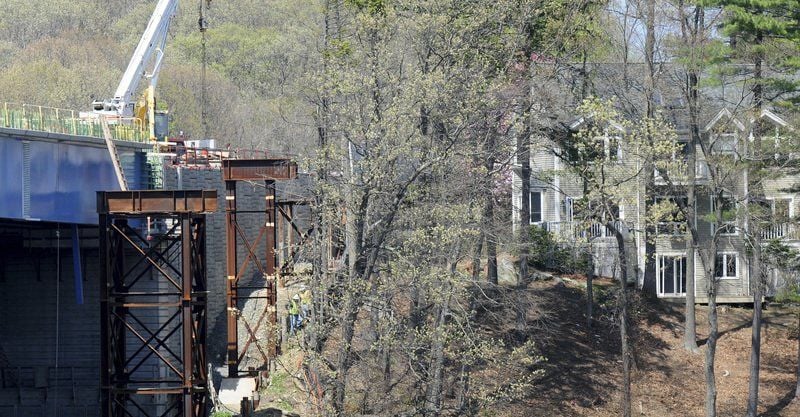 BRYAN EATON/Staff Photo. Scott Taylor and his family moved from the condo, shown in this photo, that abutted construction of the new Whittier Bridge. The location of the new bridge was moved about 50 feet closer to the Taylor's condo.

File Photo. In this 2014 photo, Scott Taylor heads up the back deck of his Amesbury home adjacent to the construction of the new Whittier Bridge. The Taylors have since moved out of the home.

BRYAN EATON/Staff Photo. Scott Taylor and his family moved from the condo, shown in this photo, that abutted construction of the new Whittier Bridge. The location of the new bridge was moved about 50 feet closer to the Taylor's condo.

AMESBURY -- Almost a year after making Massachusetts history as the first home to be taken by the state after a construction project had begun, the Taylor family is facing a new problem.

For the past year, the state has been paying rent on a home in southern New Hampshire, as part of an agreement to buy the Taylors construction-zone condo and temporarily relocate the family. But two vital pieces of that initial agreement are now causing a dispute -- the state says the rental agreement ends next month, and the two sides have not come to an agreement on how much the state will pay for the Taylors' Amesbury riverfront condo.

Taylor and his wife moved into the 2,247 square foot corner unit of the four-unit Whittier Point condominium complex in 2003. When they bought it, the highway and bridge were about 75 feet from the home, and separated by woods. The Massachusetts Department of Transportation (MassDOT) began construction of the John Greenleaf Whittier/I-95 Bridge construction project in 2013, the woods were cut down and the new bridge and highway were moved to within a few yards of the condo.

Taylor initially spoke to The Daily News after an out-of-control launch girder nearly struck his house in April of 2014, detailing the many concerns he, his wife and three daughters had, such as constant noise and vibrations at all hours of the day and night, profane construction workers and a cracked foundation which Taylor compared to living in the Iraqi war zone in Fallujah.

The situation drew considerable more media attention a week later, when “Welcome to Fallujah baby!” was drawn on the side of a launch girder directly within view of the Taylor's home. The graffiti caused MassDOT to shut the $292 million project down for two days and the state agreed to take the Taylor's home via eminent domain two weeks later, with MassDOT's Right of Way Bureau arraigning to rent the family a temporary home in southern New Hampshire while the search began to find a home that is roughly comparable in size and cost to their Amesbury condo, which was most recently assessed at $462,700.

"What does it really take to motivate the state to do what we would consider the right thing?" Taylor said. "It was media attention. It was nothing to do with the fact they almost killed me and my daughter when there was a girder spinning wildly over our heads. It had nothing to do with the fact the shrapnel was routinely flying over the eight-foot fence that we forced them to construct because they didn't even want to do that. Are we really that insignificant? Are we really that unimportant?"

The search for a new permanent home has hit a snag. While Taylor said his family has enjoyed their new-found peace and quiet, the lease on the rental home runs out at the end of the month. In a letter addressed to Taylor's attorney Rob Ciampitti dated April 1, the Director of the Right of Way Bureau John DeLeire wrote that MassDOT has decided not to grant the family an extension of rental payments.

"They said that they would pay for our relocation during this process," Taylor said. "They never said anything about a time frame or parameters, they said, 'during this process.' Well the process is ongoing and essentially they have told us that they are not going to continue with that agreement and, in the words of John DeLeire, 'We are through bending over backwards for you people.'"

Taylor claimed that DeLeire made the statement in a recent meeting but MassDOT spokesman Micheal Verseckes wrote in an email that DeLeire denied making any such statement.

In the search for a new house, according to Multiple Listing Service (MLS), two units in the Hawkswood Estates condominium development located on Main Street and on the other side of the Whittier Bridge that Taylor felt were comparable to his former home. 12 Hawkswood, sold on Jan. 15 for $590,000, while 2 Hawkswood sold on Sept. 4 for $690,000.

"This is not because the sale price is higher," Ciampitti said. "But rather, according to my clients, the unit is more representative of market values as well as more consistent with the condition of their former unit."

The state however has countered with $599,900. Ciampitti filed an appeal with MassDOT's Administrative Law Department but was told that the Office of the Administrative Law Judge was vacant and awaiting an appointment from Gov. Charlie Baker. In the meantime, MassDOT will no longer be making the Taylor's rent payments come June.

"MassDOT is still committed to finance the cost of the family’s relocation should they choose to move after the expiration of the 12-month lease they entered into," Verseckes wrote. "The lease for the temporary rental home was for a 12-month period, to which (Taylor) and the property owner, as well as MassDOT mutually agreed to. There was no expectation that this agency would continue to make rent payments beyond the terms of the 12-month lease. And there was no expectation that the terms of that 12-month lease would be extended after its expiration."

Verseckes added that, while MassDOT has been working and will continue to work collaboratively with the Taylors, an appeal process also exists via Superior Court.

"Are we packing? No," Taylor said. "We are hoping this gets resolved before it gets to that point. Obviously it would be difficult to move, it would be difficult to pull the kids out of school. We thought the kids would be back in their old school by now. We thought everything would be resolved but it is not. I can see the headline, 'State almost kills family. State takes family's home. Family now homeless.'"