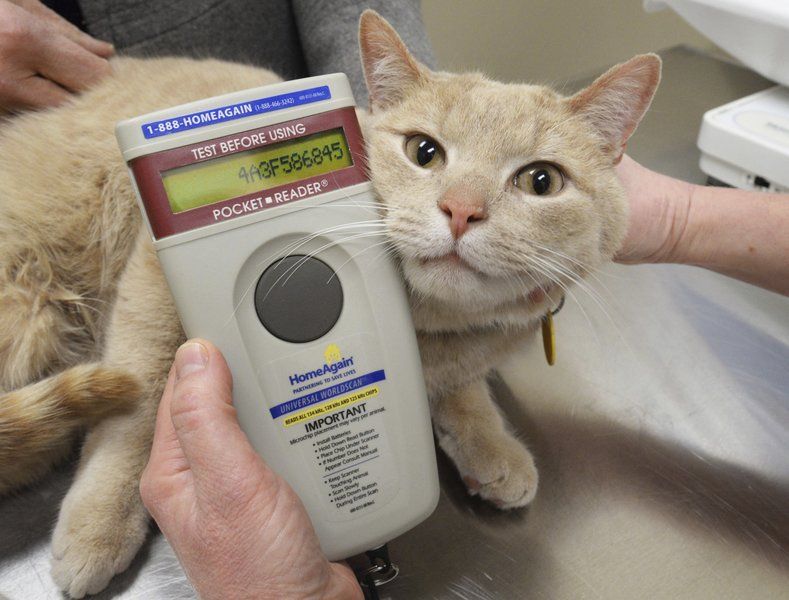 BRYAN EATON/Staff Photo A pocket reader similar to this was used to scan the chip under Ivan's skin to lead to a database where his owner was registered. 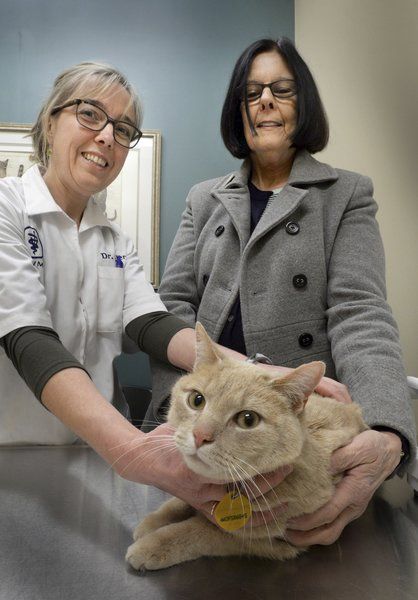 BRYAN EATON/Staff PhotoIvan has been reunited with its owner Ginger Zinkowski, right, after the microchip under his skin was scanned to find where he was from. Salisbury veterinarian Heidi Bessler, left, highly recommends pets get the chips to make identification of the animals simpler when they're found.

BRYAN EATON/Staff Photo A pocket reader similar to this was used to scan the chip under Ivan's skin to lead to a database where his owner was registered.

BRYAN EATON/Staff PhotoIvan has been reunited with its owner Ginger Zinkowski, right, after the microchip under his skin was scanned to find where he was from. Salisbury veterinarian Heidi Bessler, left, highly recommends pets get the chips to make identification of the animals simpler when they're found.

“She called everywhere, she even went on Craigslist and couldn’t locate him,” said Bassler, who owns Salisbury-based Bassler Veterinary Hospital. “Eventually, as the months went on, she thought the worst and figured that she would never see him again.”

But a recorded phone call Zinkowski received from Home Again Microchip earlier this month changed everything. Ivan had been found and only 21/2 miles down the street.

“I really couldn’t believe it at first,” Zinkowski said. “When I first got the call, I just thought somebody was playing a trick on me. But it is great to have him back.”

Ivan had a microchip implanted between his shoulder blades years ago and was registered in a national database, so when the neighbor, John, found him Jan. 9, it was very easy to find his owner.

“That man had only had him a day,” Zinkowski said. “He just found him in his backyard and they started giving him food. (Ivan) was just hanging around, looking hungry. They don’t know where he was. I certainly don’t know, but I will say that I believe that someone had been feeding him all the time because he actually gained weight.”

Just where Ivan had been for seven months is anyone’s guess. Ivan was still wearing his collar that had Home Again’s number and his information on it.

“Who knows where he has been,” Bassler said. “But he made it home thanks to the microchip. We recommend it for all pets. I have a dog and three indoor cats and they have all been microchipped. If ever they got out, they can’t tell someone where their family lives. With the microchip, that is the best hope of getting them back.”

With the use of a registered microchip, if a pet gets lost and is picked up, the pet can be scanned at a local veterinary hospital or animal shelter. Bassler recommends every pet owner have the process, which costs under $50 and can be done while their pet is being spayed and neutered.

“Lojack helps you home in and tells you where it is,” Bassler said. “A microchip won’t. You can’t sit at home and track your cat with a microchip.”

Also the owner of two dogs, two birds and a horse, Zinkowski even went out and got a new 5-month-old orange tabby named Jack while Ivan was missing.

“The new cat was actually terrified of Ivan at first because he is big. But now they are best buddies,” Zinkowski said. “I have two dogs and they greeted him and he acted like he had never been gone. He rubbed up against the dogs and made himself at home again. He’s a very laid-back cat. He just went right back into his own lifestyle.”

Ivan was at Bassler Veterinary for a checkup yesterday, with his doctor giving him a clean bill of health.

A similar story played out in Amesbury over the weekend, although without a microchip involved. Instead, it was social media that helped a 5-year-old grey and white female cat get back to its Greenland, N.H, home. It had been missing since August.

Amy Allen found the cat in her Amesbury neighborhood.

“She was in the yard, off and on, but she wasn’t regularly outside,” Allen said. “My husband saw her and my kids saw her. She was kind of skittish. But this weekend, my kids started feeding her some dog food and she gobbled it up.”

Allen took some pictures of the cat and posted them on numerous Facebook pages Monday morning, including “Amesbury Talks,” a page moderated by the founders of the political action committee I Am Pro Amesbury. By Monday evening, the cat was back with her Greenland family. The cat had been temporarily left with a family member in Amesbury in August, had gotten out and had gone missing.