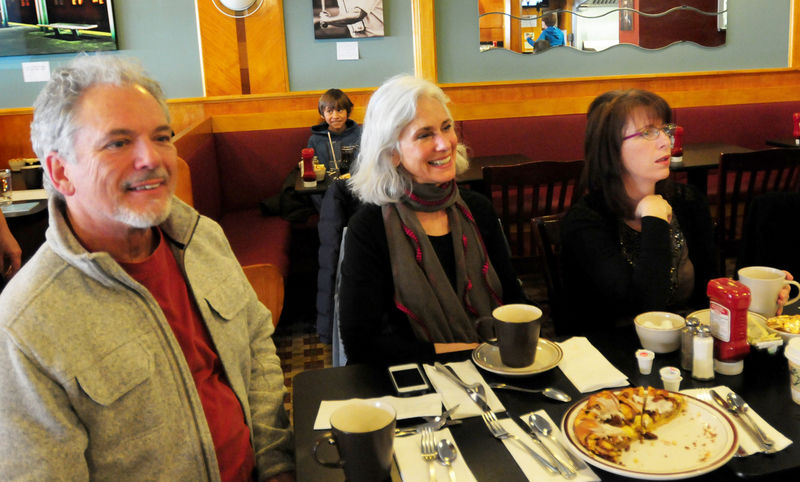 Salisbury's Elissa Campbell, center, watches "The Queen Latifah Show" at 17 State Street Cafe, as she is presented as People Magazine's most beautiful "real" woman in the 50-plus category. She is flanked by her husband, Robert, and Darlene Sweeney, the owner of WSM Talent. 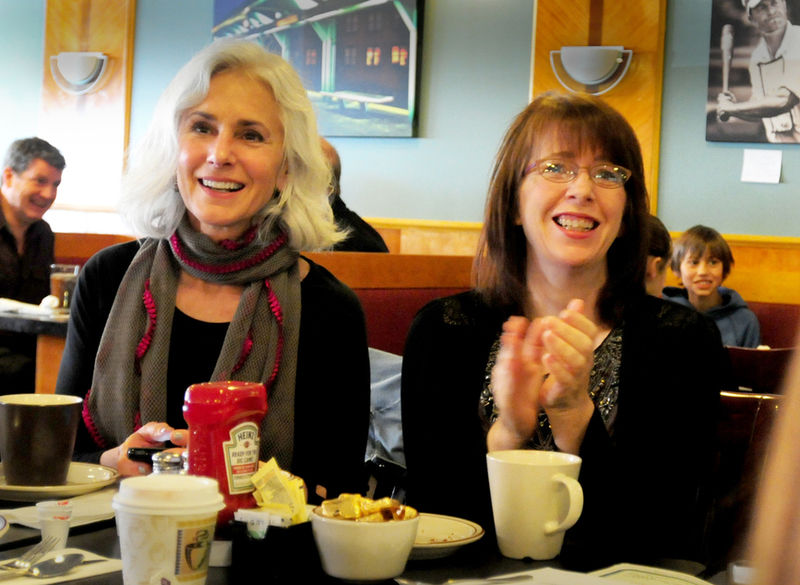 Salisbury's Elissa Campbell, left, watches "The Queen Latifah Show" at 17 State Street Cafe, as she is presented as People Magazine's most beautiful "real" woman in the 50-plus category. She's pictured with Darlene Sweeney, the owner of WSM Talent.

Salisbury's Elissa Campbell, center, watches "The Queen Latifah Show" at 17 State Street Cafe, as she is presented as People Magazine's most beautiful "real" woman in the 50-plus category. She is flanked by her husband, Robert, and Darlene Sweeney, the owner of WSM Talent.

Salisbury's Elissa Campbell, left, watches "The Queen Latifah Show" at 17 State Street Cafe, as she is presented as People Magazine's most beautiful "real" woman in the 50-plus category. She's pictured with Darlene Sweeney, the owner of WSM Talent.

SALISBURY — Oscar winner and beauty Lupita Nyong’o may grace the cover of People’s “Most Beautiful” issue on newsstands today, but it’s local Elissa Campbell who will get kudos around here for being the magazine’s pick as the most beautiful “real” woman over 50.

According to Darlene Sweeney, the owner of local talent agency WSM Talent, which represents Campbell, her 55-year-old client’s been on a whirlwind.

“Elissa knew she’d won last week, but she was sworn to secrecy,” Sweeney said yesterday. “She flew out on Monday for “The Queen Latifah Show.” That was taped on Tuesday to be aired today (Thursday). We watched the show together with a small group of friends this morning at (17 State Street Cafe). It’s exciting.”

“I’ve dealt with her in the past when she and her husband volunteered to help out at Salisbury Community Television,” Beaulieu said. “I always thought she was a very attractive woman.”

Both Campbell, who works in marketing, and her husband, Robert, who is retired, have lived in Salisbury since 1999. They both got involved in modeling a few years ago when friends recommended it might work for them and provide a new creative outlet, which they say it has. According to the Campbells, modeling has given them a chance to grow, express themselves, experience new things and meet all types of people.

It was professional photographer Andreas Kuehn who, after taking a portfolio of head shots of her, recommended Campbell enter People’s “Real Beauty at Every Age” contest, part of People’s annual Most Beautiful issue.

Editors and readers reviewed and voted on more than 10,000 submissions, selecting the women to represent the most beautiful in four age groups: the 20s, 30s, 40s and 50s. The grand winners were: 22-year-old Kimberly Tran of Houston, Texas; 39-year-old Nazy Meknat of Los Angeles; Courtney McCarthy, 40, of Hinsdale, Ill.; and Campbell.

The four were flown to New York City for a photo shoot and interviews, which appear in this week’s People, an issue that showcases the magazine’s selections for the 50 Most Beautiful People in the world. Holding the top slot this year is actress Nyong’o, who won an Oscar for her work in “12 Years a Slave.”

Campbell’s beauty advice to others is simple: “Age is only a number!”

Although it’s wonderful to be appreciated for her beauty, Campbell said, winning proves that beauty comes from within.

“It’s really been quite a pleasant surprise,” she said. “It gives us the opportunity to celebrate that beauty is more than skin-deep.”

Sweeney said this honor is not a culmination for Campbell, but hopefully a beginning.

“This is a launching pad for her career, and we really need to grab hold of it,” Sweeney said. “We’re hoping to work with a public relations firm from Boston to get Elissa more interviews and in front of other media. There’s a short window on something like this. It’s very easy to be yesterday’s news.”

The Campbells have more going for them than pretty faces to endear them to their fellow Salisbury residents. They’ve both been involved members of the community, helping out when needed, according to Knowles and Beaulieu. Robert Campbell served with Knowles on the town’s Solar Energy Committee. And, according to Beaulieu, the two were major forces behind Salisbury’s Community Garden.

But being singled out by People magazine is no small feat, the men agreed.

“Her winning is a positive for Salisbury,” Beaulieu said. “Even the beautiful people live here.”

Colchester, Vt. - Linda Gertrude Perreault, age 84, the daughter of Paul C. and Mazie R. Hitchcock of Haverhill, Mass., passed away on October 12, 2020 in Colchester, Vt. A longtime resident of Amesbury, Mass., she enjoyed retirement in Port Orange, Florida prior to returning in 2010. She wa…