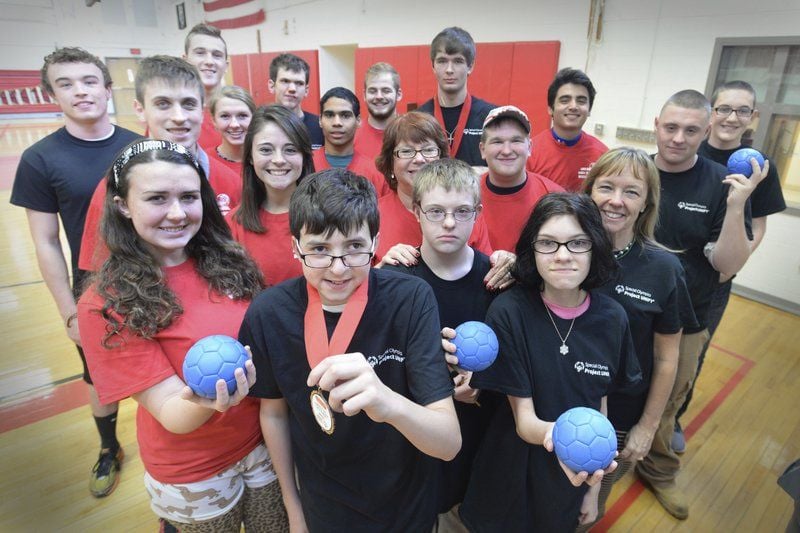 BRYAN EATON/Staff photoSurrounded by his Amesbury High School Unified Bocce Team and coaches, Derek Johnson shows off the team’s medal in the gymnasium. The team participated in the Special Olympics this past Saturday. 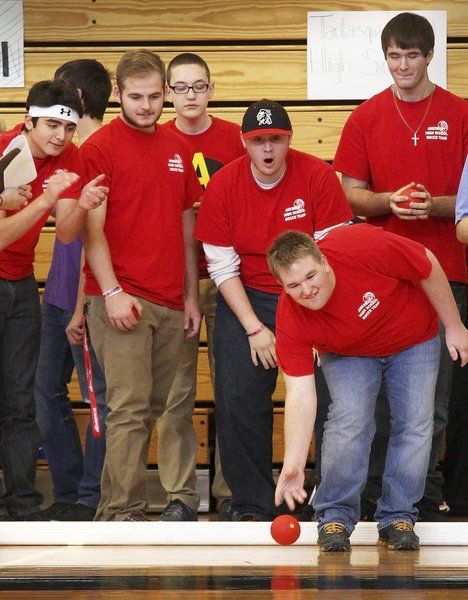 Logan Nyman’s teammates cheer him on in the bocce tournament at the Special Olympics this past Saturday.Courtesy photo

BRYAN EATON/Staff photoSurrounded by his Amesbury High School Unified Bocce Team and coaches, Derek Johnson shows off the team’s medal in the gymnasium. The team participated in the Special Olympics this past Saturday.

Logan Nyman’s teammates cheer him on in the bocce tournament at the Special Olympics this past Saturday.Courtesy photo

“It doesn’t matter what your (strengths) and weaknesses are, it is all about having fun,” AHS unified bocce team member and sophomore Alex Sargent said. “I hope to continue it.”

Sargent, along with eight fellow special education athletes and nine unified partners from the AHS School Council, traveled to Grafton High School to compete in the Special Olympics bocce tournament this past Saturday. Splitting up into three separate teams, the Amesbury bocce team won roughly half of their matches.

“They had an absolute blast,” unified partner Hayley Tagliente said. “At the end of the tournament, they all got medals and they all were having so much fun.”

A senior, Tagliente has been training with the athletes since the autumn of her junior year.

Each Wednesday morning since February, the athletes and unified partners have met at 7:20 and trained in the AHS gym. The game of bocce was chosen because of its inclusive nature.

“The rules are not too complex, so anyone with any physical ability is able to play,” Tagliente said. “And everyone picked it up really easily.”

A varsity soccer, indoor and track athlete, Tagliente admits that bocce did take a little getting used to.

“It is a lot more technique than it is just physical strength,” Tagliente said. “It took me a little while to pick up the proper technique of being able to roll it with the right amount of power. But after a while, I was good.”

This weekend marked Amesbury’s first Special Olympics tournament, according to English teacher and student council adviser Jean Brockmyre, who added that the trip to Grafton would not have happened without an Inclusion Revolution grant from the Amesbury Education Foundation Inc. (AEFI), which enabled the team to pay for their practice indoor bocce sets, team uniforms and the bus for the trip. The AEFI grant will also fund the team’s awards banquet in December.

“We had a great time,” Brockmyre said. “These unified partners really took to their responsibility really well. This is a real, legitimate competition to everyone, not just the athletes. I have football players on this team. Hayley is going to be an engineer herself. These kids are really able to advise and get the ball where it needed to be.”

With the 2014 tournament now in the books, the bocce team will be introduced to the entire AHS student body during their annual Color Day rally tomorrow and are also looking forward to their banquet.

“They know they were winners,” Brockmyre said. “They were so proud to have participated that they wore their medals to school today.”

While the weekend’s bocce tournament will mark Tagliente’s first and last, she said she is very happy she was a part of the team.

“It is very enlightening,” Tagliente said. “These kids are the same as all of us and no matter what struggles they have, in the end these are all great kids that are so talented. Most of the kids on the team are better at this sport than I am.”

The team will continue to practice on Wednesdays; and while Sargent said he was happy to place well this year, he is looking forward to winning it all next year.

“I think this does have a big impact on the special needs’ kids’ lives,” Tagliente said. “Because we get to practice with them every Wednesday morning and we see how they are to come to school on those days really makes me feel good. For right now (the game) is going to be bocce. But I think, in the years coming, they definitely have the potential to move up to different sports.”