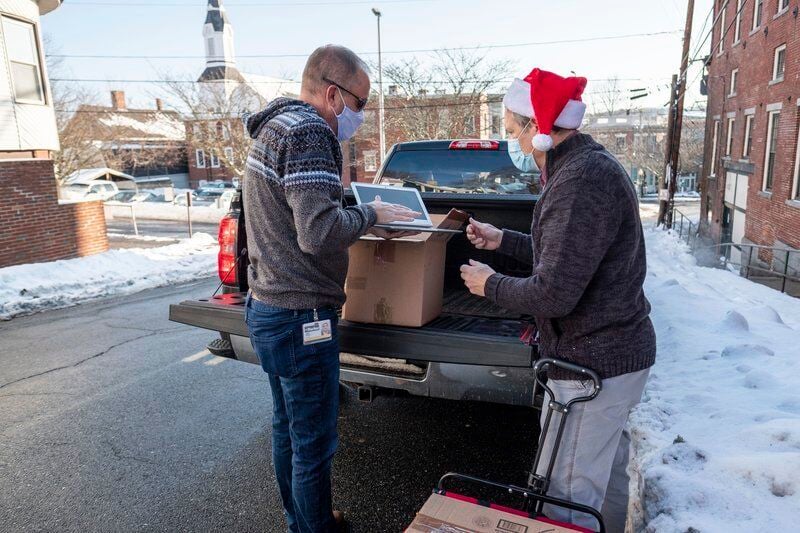 RYAN MCBRIDE/Staff photoJeff Williams of Amesbury, left, gives refurbished laptops to John Budzyna, assistant to the CEO at Jeanne Geiger Crisis Center. Williams has been rebuilding and donating laptops to families in need since August. 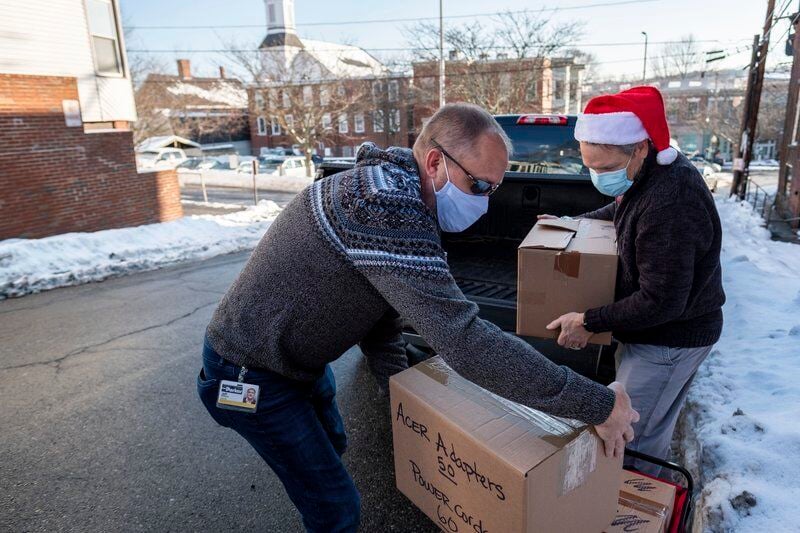 RYAN MCBRIDE/Staff photoJeff Williams of Amesbury, left, gives refurbished laptops to John Budzyna, assistant to the CEO at Jeanne Geiger Crisis Center. Williams has been rebuilding and donating laptops to families in need since August. He started the effort after hearing that Amesbury Public Schools' Chromebook order was delayed and has donated 500 laptops to families in and out of the district — even as far as Colorado.

RYAN MCBRIDE/Staff photoJeff Williams of Amesbury, left, gives refurbished laptops to John Budzyna, assistant to the CEO at Jeanne Geiger Crisis Center. Williams has been rebuilding and donating laptops to families in need since August.

RYAN MCBRIDE/Staff photoJeff Williams of Amesbury, left, gives refurbished laptops to John Budzyna, assistant to the CEO at Jeanne Geiger Crisis Center. Williams has been rebuilding and donating laptops to families in need since August. He started the effort after hearing that Amesbury Public Schools' Chromebook order was delayed and has donated 500 laptops to families in and out of the district — even as far as Colorado.

AMESBURY — A local father, who has fixed and donated close to 500 laptops to people in need since August, delivered 60 Chromebooks to the Jeanne Geiger Crisis Center on Tuesday with the help of two $1,250 donations.

Jeffrey Williams, a former elementary school teacher who has spent the last 20 years working in information technology, was first moved to help others over the summer when he found out that Amesbury Public Schools' request for Chromebooks was placed on back order.

To bridge the gap, Williams purchased old laptops and parts from Bytefixx — a computer repair and electronic recycling service in Kensington, New Hampshire — refurbished the devices and gave them to students and teachers for free.

Williams has paid a lot out of his own pocket, but he also started a GoFundMe page for the project, which he named Laptops for Learning. The GoFundMe page has since raised almost $12,000.

The father of two has never limited his donations to the Amesbury area, and has always welcomed requests from anyone, with no questions asked. He recently sent  Chromebooks to Ohio and as far away as Colorado.

Just when he thought interest was dropping off a little over a month ago, Williams said he saw donations suddenly pour in again.

Amesbury native Philip Dandurant handcrafted a dollhouse, which was recently raffled off at Vermette's Market with the proceeds benefiting Laptops for Learning. The raffle raised $850 and Vermette's added $150, bringing the total donation to $1,000.

Williams said he has received a lot of requests from families in Lawrence and it has made him question why school districts are not helping each other out.

Many of the devices he purchases from Bytefixx come from neighboring school districts.

"These Chromebooks that I'm getting, they're basically what some of these more elite school districts are throwing away," he said, explaining how they still have the "property of" Exeter, New Hampshire, or Andover Public Schools sticker on them.

"You would think that there would be a better way for schools to be able to share those with other schools that could use them, rather than just selling them for pennies on the dollar or basically throwing them away," he said.

Williams would like to turn his project into a nonprofit because he knows this issue is not limited to the COVID-19 pandemic.

"How can we, in today's world, have school districts that don't have the proper technology, even in a normal circumstance?" he said.

Williams also received two donations of $1,250, which the anonymous donors requested be used to supply the Geiger Crisis Center with Chromebooks.

In a statement, a spokesperson for the center said the Chromebooks will be a "game changer to better support and connect with the families we serve."

Since March, the center has been providing virtual services to survivors of domestic violence and their families.

"The Chromebooks will be ideal for improving remote therapy sessions in our Children’s Trauma Program, where some children are using outdated equipment, sharing with other siblings, or borrowing a parent’s cell phone," the spokesperson wrote. "These laptops will also be helpful for the youth we serve to better engage in remote learning, as some school districts are not able to provide technology to bring home."

The center will also use this donation to assist members of its Girls Inc. of the Seacoast Area program.

On top of "extreme tension and strain" caused by health concerns, financial strain and job instability, "many survivors have experienced increased isolation which makes it difficult to safely connect with their support networks," the spokesperson said. "All these factors result in a perfect storm where survivors are more vulnerable to an increase in abuse and violence taking place behind closed doors."

The spokesperson said the staff at the Geiger Crisis Center recognize that children, who are dealing with the negative psychological impact of witnessing domestic violence or surviving any kind of trauma, are struggling now more than ever with social distancing and other limitations that prevent them from connecting with the support system they need.

The center is available to those who need support. Anyone who is not safe at home or with an intimate partner, should call the 24/7 confidential hotline at 978-388-1888, send an email to gethelp@jeannegeiger.org or visit https://jeannegeigercrisiscenter.org.

A previous story on Williams' laptop efforts can be found at www.newburyportnews.com/news/local_news/amesbury-father-rebuilds-laptops-donates-them-to-families/article_7cd8da03-f631-5891-bd66-03a6532544be.html.

To donate to the project, visit www.gofundme.com/f/pnuns-laptops-for-learning.