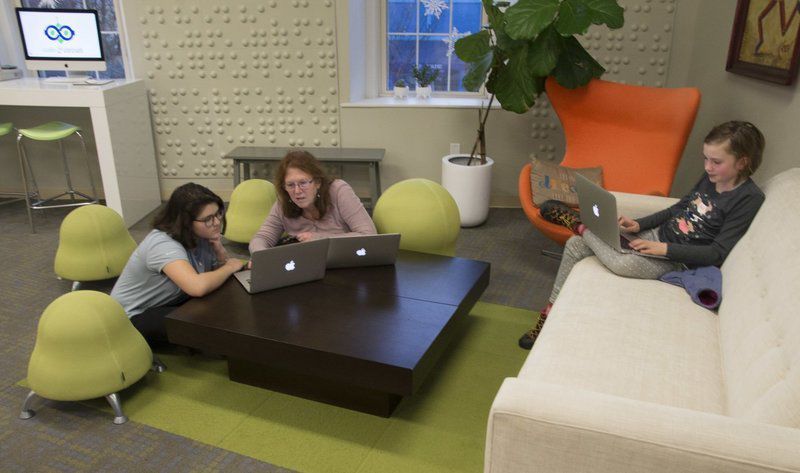 JIM VAIKNORAS/Staff photoAlice Dragnea, 15, left, works with Johanne Knowlton on computer coding at Code & Circuit in Amesbury while Zoe Moccie, 10, works on her own. 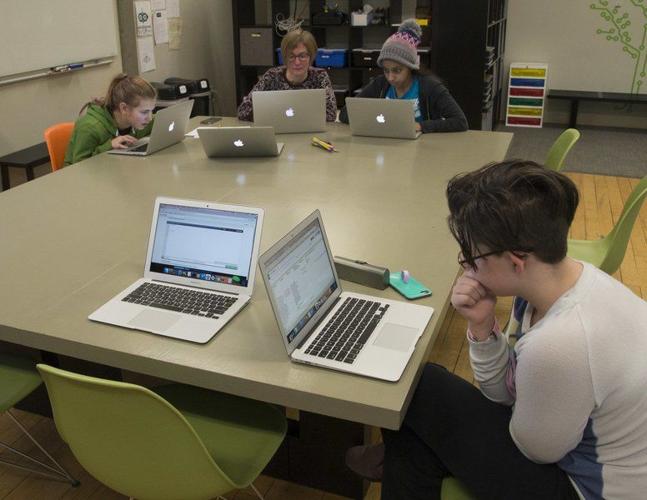 JIM VAIKNORAS/Staff photoAlice Dragnea, 15, left, works with Johanne Knowlton on computer coding at Code & Circuit in Amesbury while Zoe Moccie, 10, works on her own.

AMESBURY — Sarah Chapman wanted to close the gap between girls and boys who can write computer code and, with the help of her community, she is well on her way.

“The kids my daughter’s age have grown up with smartphones, computers and tablets around them,” Chapman said. “They are really savvy technology-wise. But having them make it is another step.”

Chapman, an Amesbury resident and the mother of a 10-year-old girl, sees computer coding as the wave of the future and wanted to introduce her daughter and other girls to the discipline. Chapman executed a quick internet search last spring and discovered Girls Who Code.

Founded with a mission to close the gender gap in technology, the New York-based nonprofit has spent the past five years teaching computer science to nearly 40,000 young women.

“Women are so underrepresented in that industry,” Chapman said. “This will be one of the top employment industries in the future.”

Hoping to start a Girls Who Code club in her hometown, Chapman approached Amesbury Public Library’s children’s librarian, Clare Dombrowski. While Dombrowski was excited by the idea, she said the library didn’t have the equipment to run the program but knew someone who could.

Enter Code & Circuit founder Ken Aspeslagh, who has been teaching coding to schoolchildren in the city for the past four years.

The Girls Who Code mission matches nicely with Aspeslagh’s own hopes to close the gender gap in technology, so he offered Chapman the use of his Main Street classroom and its coding technology.

“Over the last four years, we have noticed a smaller percentage of girls in our classes as the grade levels increase,” Aspeslagh​ said. “We will go from a fairly even distribution of girls and boys in grades K through 2, then we get up to the middle and high school levels and there may be one or two or even no girls involved in one of those groups.”

Enlisting the aid of Johanne Knowlton to instruct a two-hour class each Friday, Chapman had eight local girls, ages 10 to 16, coding at Code & Circuit by the end of October.

“You have to be a nonprofit to teach Girls Who Code, so Ken is a perfect match,” Chapman said. “He had all the hardware and the internet connection we needed. I would say a couple of the girls were nervous about computer science when we started. But we have a couple of girls who have experience and are pretty confident, so they have been terrific leaders in the group and have helped everyone organize themselves.”

“I never tried making a website before,” Dragnea said. “But I have learned both the design process and also the building aspect of it. There are a lot of factors to think about and I just learned how to use a database along with a dynamic page. It’s a lot more effective.”

Since the program is administered by the library, the Girls Who Code students get to learn for free and have spent their time building a website about endangered animals.

“These girls could be missing a career in high-tech that could be life changing for them or their families,” Aspeslagh​ said. “These are the high-paying, easy-to-find jobs of right now and the future. The fact that half of the population is not heading in that direction is something that we are trying to solve. Hopefully, we can tap into that natural curiosity they have.”

With her first Girls Who Code session due to be completed soon, Chapman said she hopes to do it again in the near future.

“We are still wireframing and putting pieces together,” Chapman said. “So it will take us until March to finish up. I will have to check with Johanne but I would love to see us do it again. I had this idea that I didn’t really know how to execute, and Clare and Ken made it happen.”

To see the Girls Who Code website, go to girlswhocode.com/.