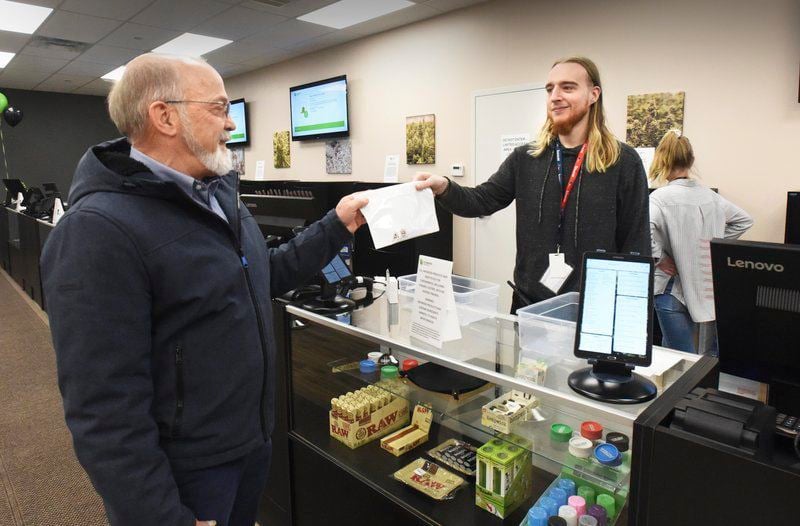 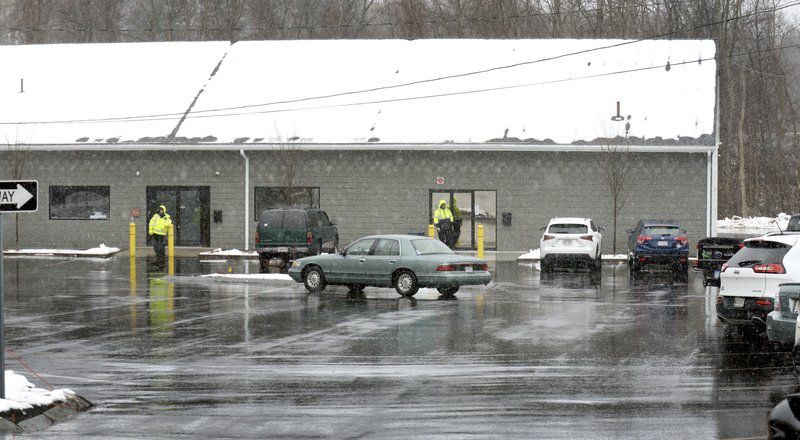 A short line of a few eager buyers formed outside the Salem-based company’s shop at 49 Macy St. by its 9 a.m. opening, setting a somewhat less urgent tone than what came with the opening of ATG’s shop on Elm Street in Salisbury just five months ago.

Making the first official purchase from ATG Amesbury was Denis Nadeau, the city’s building inspector for many years. He is officially retired and serving as the interim building inspector while city officials search for someone to take the position full time.

Holding a sealed bag with a couple of prerolled marijuana cigarettes inside, Nadeau, 68, said he was glad to finally purchase from ATG after spending “a very long time” working with the company as it prepared to open its store.

And while his cannabis use has greatly decreased since his younger years, Nadeau said he is glad to finally be able to legally purchase the drug in Amesbury.

“It’s the same as alcohol; you’re going to have some people that abuse it,” Nadeau said. “I’ve slowed down a lot, but I still enjoy it now and then.”

ATG signed a host community agreement with the city that will see ATG pay Amesbury a 3% excise tax on its revenue each quarter.

Since the company opened its shop at 107 Elm St. in Salisbury, the town received $86,045 from ATG through a similar 3% excise tax on only three months of revenue late last year.

Amesbury voters defeated a ballot question in 2017 that would have banned retail marijuana sales in the city. The vote was 2,046 to 1,133.

Customers must bring valid, government-issued identification (a driver’s license, passport or military ID) showing they are at least 21 years old. State law allows customers to buy up to an ounce of dried flower or five grams of cannabis concentrate.

Dan Talbot, president of ATG and an Amesbury resident, said he is proud to open a store in his home city.

“We’re excited — it’s been a long road to get here,” Talbot said.

ATG is now the first company in Massachusetts with licenses for three adult-use retail stores, which is the state limit. The company has a medical license for its Salem location.

The Salisbury and Amesbury stores have provisional licenses, and will soon receive the necessary inspections to obtain their medical marijuana licenses.

Talbot said ATG Salisbury has grown more popular since its opening and regularly deals with traffic and parking issues, especially on weekends. The Amesbury location, he said, could likely relieve some of those issues, especially when tourists flock to the area in the summer.

“It’s better to compete with yourself, and we think the area will support the two stores,” Talbot said. “We might get more local traffic here in Amesbury while beachgoers go to Salisbury this summer.”

Talbot said the company is working on ways to differentiate between the two stores and that the Amesbury location could be used to feature new products before they reach the other storefronts.

And because different strands of cannabis come with their own unique flavor profiles and cannabinoids to produce different effects, having multiple locations gives customers options when choosing which store to visit, depending on what’s in stock.

On its opening day, the Amesbury shop featured a wide variety of cannabis strains, including Grandaddy Purple, Original Glue and Purple Bubbleberry.

First in line for the shop’s opening Tuesday was Lowell resident Mark Younker, who has been a regular customer of ATG’s other locations since they opened. He came to Amesbury for a specific strain of cannabis.

Younker said the recent boom in marijuana retail shops has provided him with a more rewarding smoking experience. While the in-store prices might be higher than those on the street, he finds the products to be more reliable and higher quality.

“The stuff that’s on the street can save you money, but it’s not as good, and you don’t know what you’re buying,” Younker said. “So coming here, it’s more enjoyable, and the quality is a lot more potent here, so I find myself smoking a lot less — it’s like a good wine or a craft beer.”