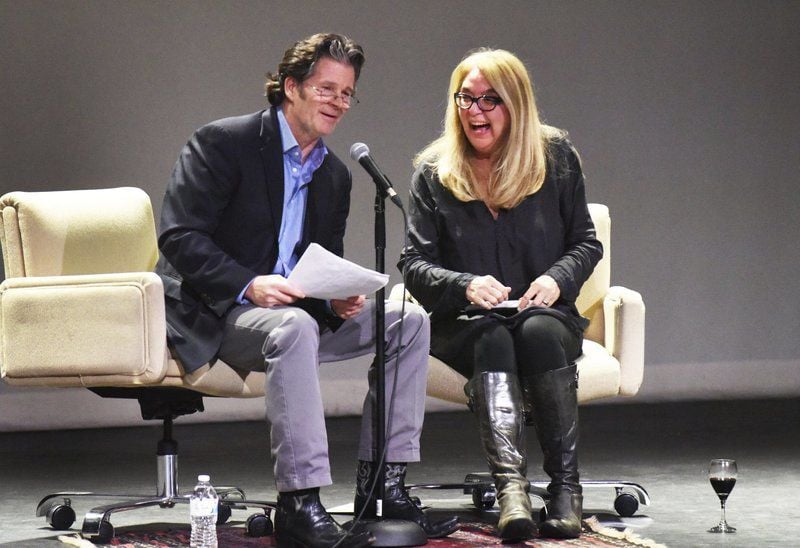 BRYAN EATON/Staff photo.Authors Andre Dubus III and Ann Hood share the stage for the start of the Newburyport Literary Festival Friday night. Hood was the author honored by the festival this year. 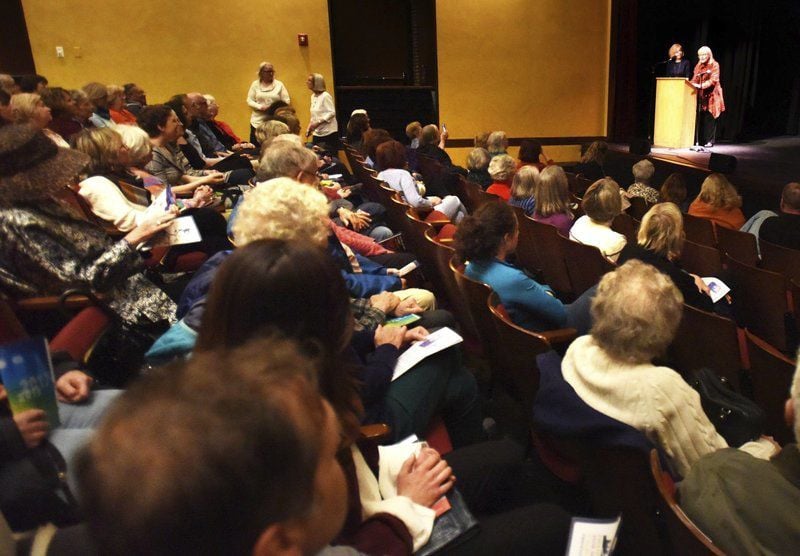 BRYAN EATON/Staff photo.Authors Andre Dubus III and Ann Hood share the stage for the start of the Newburyport Literary Festival Friday night. Hood was the author honored by the festival this year.

Rainy days are often found to be endearing pleasures for bookworms who want to turn their pages in privacy, but the opening night of the Newburyport Literary Festival herded local book enthusiasts to the Firehouse Center for the Arts.

To commence the two-day event, the festival’s steering committee hosted a conversation and question and answer session Friday evening with honored guest and novelist Ann Hood, who was interviewed by Andre Dubus III, a fellow author and long-time friend.

Throughout the discussion, Hood divulged the books that shaped her life and formed a blueprint while on her path to becoming a writer — something several figures in her life said was an impossible dream.

Hood noted that before writing, she was, and remains, an avid bookworm. Dubus noted her work as a writer as “a love letter to the reading life.” Hood said she learned to read at four years old and was picking up the newspaper by the time she was five.

“I was the kid reading the Froot Loops box,” said Hood, noting that reading was something her relatives were estranged to and that books were not something her blue-collar family could afford.

Hood said that once she was established as a writer, her family rejoiced her work but didn’t really understand what she did for a living. The concept of being an author was foreign to those closest to her. Recollecting a memory of purchasing a book as a child, Hood said her mother thought reading was a “waste of time.”

“She would tell me to put that (book) down and go outside and play,” she added.

Although the first library didn’t open in her hometown of West Warwick, Rhode Island, until she was in the fifth grade, Hood, who is now 61, read the entire “Nancy Drew” series, among other books, with her cousin.

Hood, noting the first “real” book she ever bought was “Love Story” by Erich Segal, documented 10 of the most influential books on her life in her latest novel, “Morningstar: Growing Up with Books,” a novel she says depicts the “the magic and inspiration of books.” Hood read the fourth chapter titled “How to Buy Books” to the audience, who was left in laughter and tears from her words.

Several books, including “Little Women” and “The Bell Jar” are mentioned in Hood’s latest work. These books, she said, taught her the things lacking in her public school education. Noting the mill town’s poverty level and social issues, Hood reflected on a moment exchanged between her and her guidance counselor, who asked her what sort of career she wanted after graduation.

“I told him I want to be a writer and he said ‘people from here don’t do that,’” said Hood, who used to walk to the post office with her father every so often and mail copies of her 11-page short stories to the Random House publishing company.

The Rhode Island author said she began writing her first novel, “Somewhere off the Coast of Maine” while working as a flight attendant for Trans World Airlines.

“I would write in the jump seat,” said Hood, who described the ample time she had on international, overnight flights.

She chose to write the book, which is about her older brother who died at 30, as a fiction piece, something she found easier than coping with the pain of writing a nonfiction account of her grief. When Dubus asked Hood about the lessons she’s learned in writing about her loss, she said that the ultimate goal of writing is to question why people read in the first place, noting the importance of understanding the human condition.

“I understood why we write and what an archaeologist you have to be to write,” Hood said.

Now an established author, Hood said she doesn’t think she would be a writer if she didn’t have books to keep her company while growing up because they taught her everything no one else was capable of telling her.

“I just believed I would be a writer in this world where it was such a foreign thing,” Hood said.

Several audience members, which included some writers, posed questions about ‘when is the right time to pursue an agent’ and ‘how do you know which genre to choose.’ Hood noted the importance of focusing on the craft, rather than creating a platform, whether it’s through a blog or social media.

“How do you become a writer? You write,” she said. “The idea that you need to create a blog ... those hours could be spent perfecting your craft.”

Reflecting on a college writing course she took while earning her master’s degree in New York, Hood said she finally heard the words spoken by her professor that every young, aspiring author desires to hear on her or his road to success.

Hood is the author of 14 novels, three memoirs, a collection of short stories, a 10-book series for middle readers and a book for young adults.

The Newburyport Literary Festival opened Friday night and runs through the day Saturday, April 28. To view a schedule of events for the festival, visit http://newburyportliteraryfestival.org/.