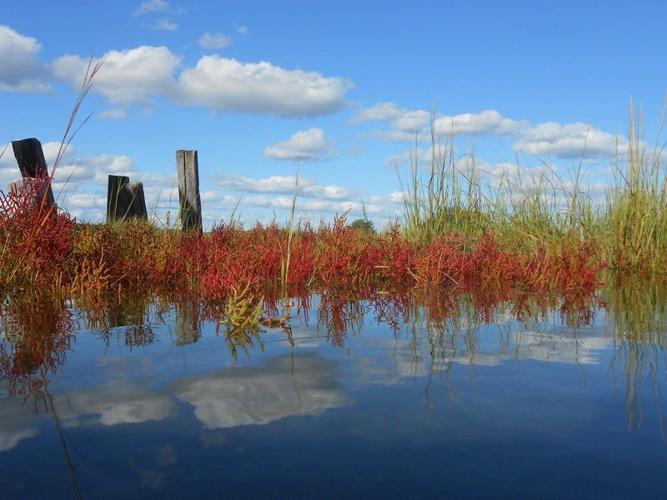 Pickleweed in the Great Marsh. 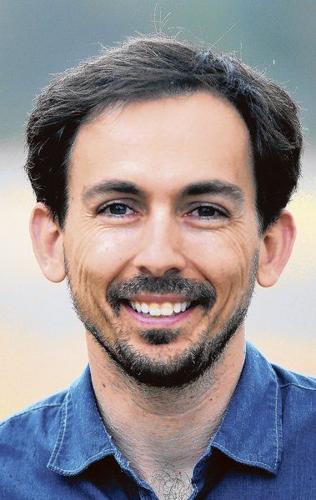 Pickleweed in the Great Marsh.

ROWLEY — The scarlet gypsy of the marsh foretells an early fall.

Each year before the leaves of the trees are set afire with an autumnal blaze, before the morning air is tart with a cold bite, scarlet forests of pickleweed, also called salt pickle, blaze across the marsh. And this year the blaze is early. Mid-August instead of the usual early September.

I’m standing in the middle of what looks like a forest small and scarlet saguaro cacti that reach just above my ankles. This pickleweed spent its summer green, but has now flushed red. The forest extends for yards in either direction but stops abruptly against the tall, still green Spartina grass. Here and there I see small flare-ups of scarlet among the Spartinas. These large and small scarlet patches create a mosaic among what would otherwise be a nearly monochrome palette of green.

This color mosaic emerges from the pulsing gypsy lifestyle that the pickleweed has adopted. A plant here today, maybe not next year. Its weak and shallow roots reflect its impermanence. Its success is found when better competitors, like the deep-rooted Spartinas, are ripped from the marsh by ice or smothered by wrack, swirling mats of dead plants from the previous year brought in by the tides. Disaster to the Spartina is opportunity to the pickleweed, as the gypsy settles into an unoccupied space. A single gypsy only needs an inch or so of open canopy to flourish so it will snuggle between the stems of Spartina if Spartina forgets to grow there. These gypsies are not picky where they settle; they won’t be there for long.

Where I stand, large swaths of wrack had sat on this marsh for years and smothered all the grasses. Recently, the tides lifted and shifted the wrack and revealed the black soil below. And then the land rush began. Because it invests little into roots, pickleweed can quickly establish, unlike the Spartinas who need time to develop a healthy root system. Because this stand of pickleweed is so continuous and large, it may hold this part of the marsh for two years or more, until it is slowly evicted by the Spartinas as they march across the marsh.

Because pickleweed is a population of gypsies that moves at the vagaries of tide and ice, the marsh mosaic shifts like a kaleidoscope as the marsh constantly rearranges itself. Despite the seeming sameness of a summer marsh, with its endless green lushness, a fall marsh, with its color mosaics, reveals that from one year to the next, it is never the same.

I kneel down and squeeze a fleshy finger of pickleweed. It’s succulent. Succulence is a strategy used by plants to deal with salty soils. When I bite into its succulence, there is a soft crunch, which is why it’s sometimes called “glasswort.” My tongue tells me excitedly that it has learned one of the gypsy’s secret to success: salt.

Drawing water from salty soil is a challenge because of the physics of osmosis. Water molecules will most always move from wetter areas to drier ones, like people at a party who move from an overcrowded living room to the emptier kitchen. It is said that ancient armies would salt the fields of conquered civilizations, in effect they created fields where water would leave a plant, not enter it. But the pickleweed gypsies have conquered osmosis by using salt as an ally, not foe.

A test of the pickleweed’s flesh reveals that it’s 9 percent salt. The soil is 6 percent. Both are saltier than the ocean, which is only 3.5 percent salt. Now the gypsy has leveraged osmosis to its advantage and water is drawn from the salty soil into the saltier plant.

High salt concentration can kill a cell and enough cell death leads to plant death. Here again, the gypsies are clever to prevent a briny death. One feature that defines a plant as a plant is the presence of a large central vacuole in the cell. These vacuoles are like large storage trunks separated from the cytoplasm and other organelles by a plasma membrane. Plants shove all kinds of things into these cellular trunks and pickleweed stuffs its vacuole with sodium ions, a key component in salt. The cell is protected because the salts are safely stuffed into the salty trunk.

The salty finger of pickleweed that I have plucked has many joints called nodes. I break the finger at one of those nodes. It snaps and reveals two faint white circles. Developing seeds. It is already preparing for its end. This species of pickleweed, Salicornia europaea, is an annual – it is only here for the summer. As fall arrives, pickleweed will purge its water and its salt. Its flesh will shrivel and the seeds will be released. The seeds are the true gypsies and they will caravan on the tides until they find their own one inch of the marsh soil to call home next year.

For now the gypsy is scarlet as it prepares for fall. As fall arrives pickleweed’s scarlet will ebb and it will begin to shed its layers. Just as I will begin to add my own.

David Samuel Johnson is a saltmarsh ecologist at the Marshview Field Station in Newbury. He blogs about science and writing at New Leaf, www.manayunkia.com. His column appears regularly in The Daily News.