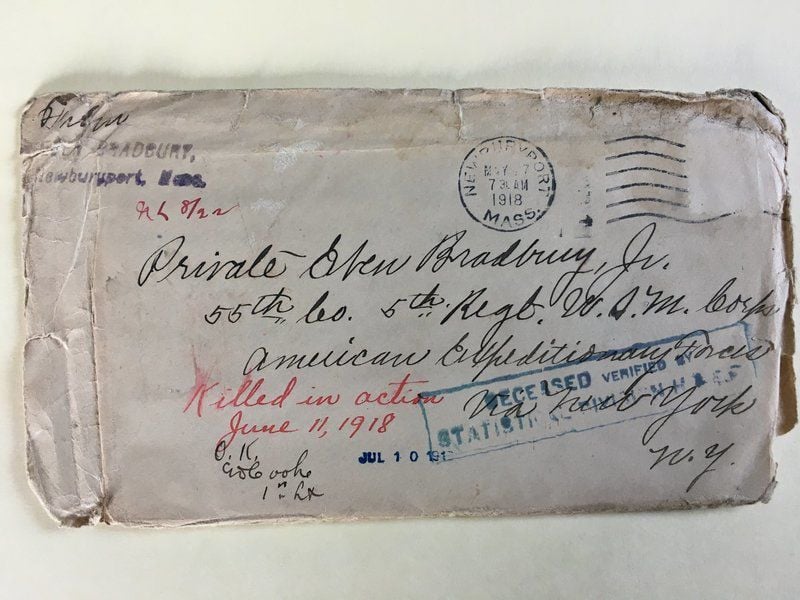 Courtesy photoA letter written to Marine Pvt. Eben Bradbury Jr., 20, a Newburyport native, who was killed in World War I. 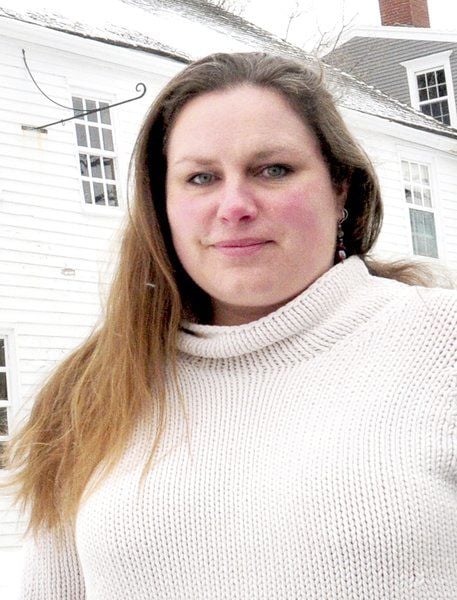 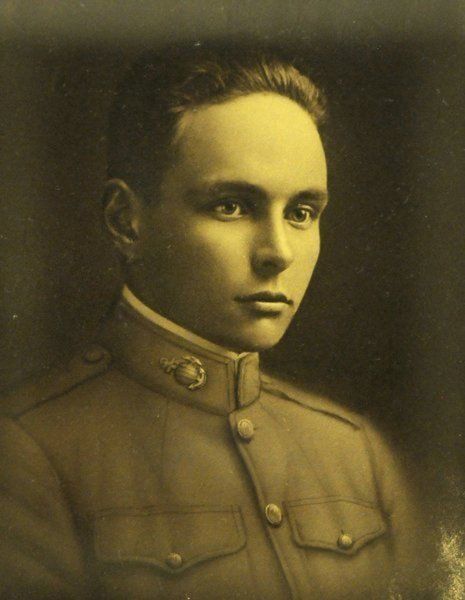 Courtesy photoMarine Pvt. Eben Bradbury Jr., 20, a Newburyport native, was killed in action June 11, 1918, in the Battle of Belleau Wood during World War I.

Courtesy photoA letter written to Marine Pvt. Eben Bradbury Jr., 20, a Newburyport native, who was killed in World War I.

Courtesy photoMarine Pvt. Eben Bradbury Jr., 20, a Newburyport native, was killed in action June 11, 1918, in the Battle of Belleau Wood during World War I.

NEWBURYPORT — When Bethany Groff Dorau took a wrong turn to Bartlet Mall while running an errand, she didn’t realize she was starting a long, emotional path to uncovering the story of a World War I veteran from the Clipper City.

After several odd coincidences, more than 300 letters and a trip to France, Dorau has compiled the life of Pvt. Eben Bradbury Jr., one of the first from Newburyport to die in the war at age 20, into a book that will be released in June.

To commemorate the 100th anniversary of World War I, Dorau, who is the North Shore regional site manager of Historic New England, will discuss her book “A Newburyport Marine in World War I: The Life and Legacy of Eben Bradbury” at the Newburyport Literary Festival at 1 p.m. on Saturday at City Hall.

Although she’s lived in the area since she was 12 years old, Dorau delved into the life of Bradbury after she noticed the memorial for him at Bartlet Mall.

Dorau believed it to be a coincidence that she noticed the plaque while working on a textbook project on the Battle of Belleau Wood, which happened to be the battle in which Bradbury was killed.

“Everything is connected,” Dorau said. “Eben put a real local face on this battle that I had been reading and researching and writing.”

After searching through public records at City Hall and old newspaper clippings, Dorau was introduced to Steve Bradbury, a retired firefighter, Korean War veteran and distant relative of the young, fallen Marine.

Steve Bradbury, who has maintained the military memorial in town for years, told Dorau he had a medal that was meant to be given to Eben when he returned from the war.

But Eben died in France, where his body was buried at the Aisne-Marne American Cemetery. In 2015, Dorau was given the task of placing the medal on his grave, nearly 100 years after his death.

“I love missions,” said Dorau, who documented her voyage in travel logs in The Daily News. “It was really a way to close the loop.”

A year to the day after she visited Bradbury’s grave in 2015, a collector in California contacted Dorau after coming across her travel logs. The collector said he recently purchased a chest of items through an estate sale that had once belonged to the elder Eben Bradbury, who traveled to California in 1921 with his wife after his son was killed in action.

The California collector flew to Newburyport with a 40-pound suitcase full of letters, photos and miscellaneous items. The majority of the letter bundles, tied together with string, were sent to Eben Jr. from his father, who worked as a druggist in town, while he was stationed overseas.

Many of the letters were returned unopened after the private was killed in battle.

Among several of the letters, assuring his parents that he was safe, was a letter postmarked the day of his death, June 11, 1918.

Through these letters, Dorau learned of the intimate details of the Bradbury family — their personality traits, that the father and son enjoyed milelong walks, what their favorite foods were, and if a family member was mad at another.

“I know his family,” she said. “I know the exact spot where he died in battle.”

The young private, known by friends as “Bunny” because of his small stature, was a baseball player at Newburyport High School. He was also an avid bowler whose scores were often published in the local newspaper.

“He enlisted in the war on my birthday, April 17,” said Dorau, who noted Bradbury’s compelling face, revealing how young he was at the time of his deployment.

“There was no mention of his plans after graduating high school, whether it was going to college or getting a job,” she said. “He didn’t really know what he was doing.”

Dorau, who obtained several diaries from Bradbury’s father leading up to 1938, noted that after his son’s death, Eben Sr. never mentioned him in his writing again. His body was never returned to Newburyport.

“As a mother and as a person, that was powerful and very sad,” Dorau said.

Through several coincidences later and additional research, Dorau uncovered the most ironic fact of the story, making it seem like taking that wrong turn to the memorial plaque was meant to be. She is his sixth cousin, twice removed.

In June, Dorau will travel to the Aisne-Marne American Cemetery for a second time, fully closing the book on her story. She will place copies of the book in the archive at the cemetery, where Dorau said in-depth personal stories can be found on each soldier.

“I want to read Eben his mail from his dad,” she said.

Exeter - Services for Alfred A...