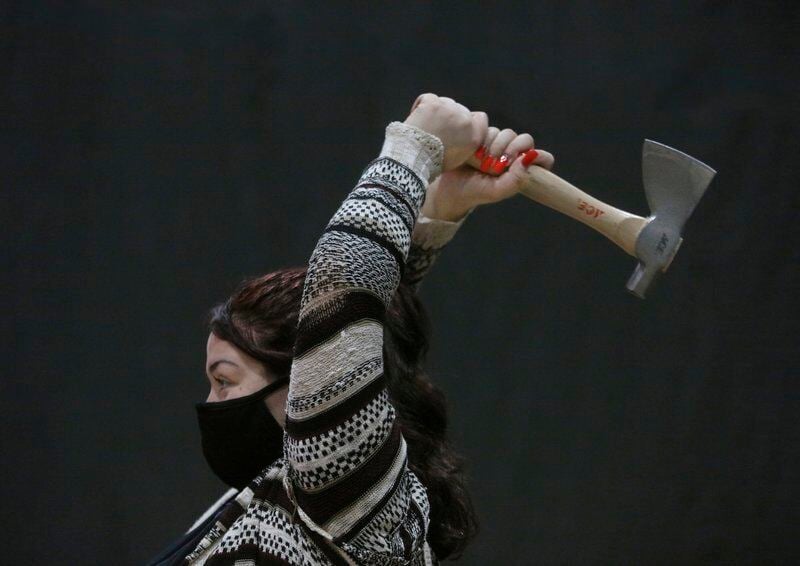 Victoria Crespo winds up to throw a hatchet in the new ax-throwing area at Gametime Lanes & Entertainment in Amesbury. 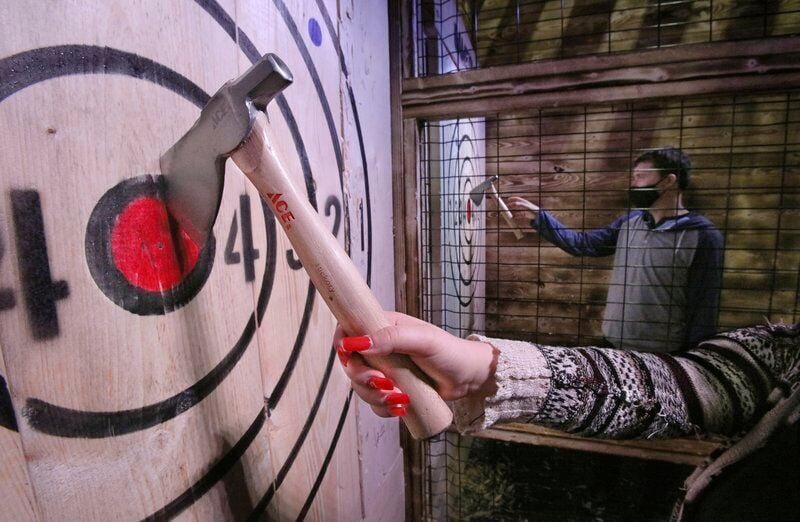 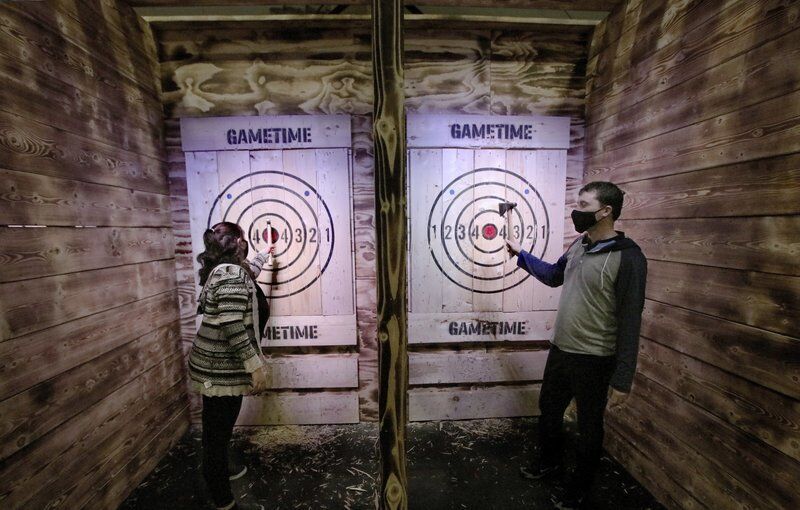 Victoria Crespo winds up to throw a hatchet in the new ax-throwing area at Gametime Lanes & Entertainment in Amesbury.

AMESBURY — The owners of Gametime Lanes & Entertainment on Route 110 have found the next big, new thing in tavern entertainment: ax throwing.

“People always laugh and say, ‘That is all we need, ax throwing and alcohol,’” co owner Steve Belmonte said. “I know the combination doesn’t sound very safe but it is very, very safe.”

Belmonte and his partner, Anthony DeCotis, bought out Leo’s Super Bowl on Route 110 in March 2019 and opened their business that November.

“We bought Leo’s Super Bowl for $3.2 million and we put close to $2 million back into it,” Belmonte said.

Four months after Belmonte and DeCotis opened their doors, the COVID-19 pandemic shut them down.

“We made it to the second week of March and then basically everything was shut down for the next six months,” Belmonte said. “The governor put us in Phase 4 of the reopening. We laid off most everybody. We did get a bit of the Paycheck Protection Program funding. But the government only allowed us to look at the numbers we received ever since we were open in November. They wouldn’t look at the previous owner’s numbers. So that kind of killed us.”

Most of Gametime’s managers received unemployment until the venue was allowed to reopen in September, he said.

“When we did open up, we were only allowed to be open at 25% capacity, so it went really, really slow in the beginning,” Belmonte said.

Belmonte and DeCotis continued to move forward with their original expansion plans and opened Gametime’s tavern with the inclusion of a new attraction in ax throwing.

“It’s a one-and-a-quarter pound, 12-inch hatchet,” Belmonte said. “We have these wood planks that we use as targets and it is very similar to darts. We have six lanes of ax throwing right now and that has gone really, really well.”

Each of the two ax throwing lanes has an attendant standing by to provide guidance, he said.

“It’s not like people are in there throwing axs around like crazy,” Belmonte said. “It is just like a gun club and it is all about safety.”

Ax throwing is catching on in the Merrimack Valley with Wicked Axe opening a hatchet-throwing arena in Haverhill, he said.

“Most of the people who come and play are husband and wife, and even some families have been ax throwing,” Belmonte said. “They love it.”

The state recently allowed Gametime to open at 40% capacity and the amusement center now offers mixed-house bowling as well as arcade games, virtual reality, darts, a tavern, a restaurant and, of course, ax throwing.

All Gametime visitors need to social distance and wear protective face masks as well as sign up for COVID-19 tracing when they enter.

“We feel really good moving forward,” Belmonte said. “We also hope to add some golf simulators but that is probably six to eight months out.”