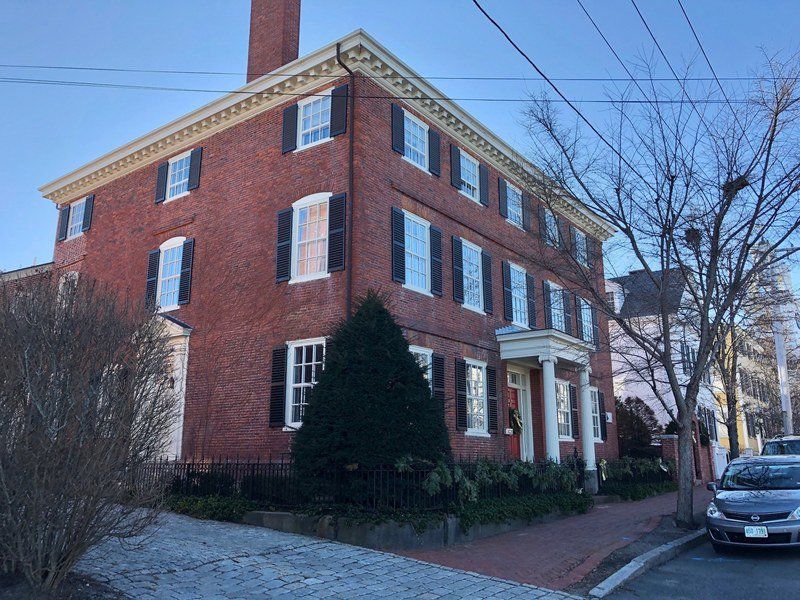 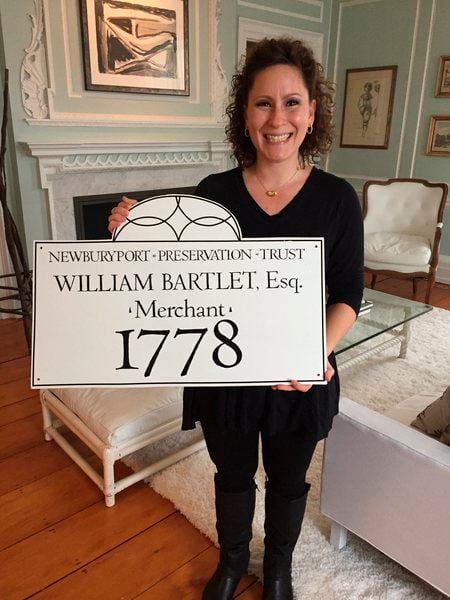 Courtesy photoElizabeth Lorayne, who owns 19 Federal St. with her husband, Robert Lorayne, holds a historic marker that will soon adorn the home’s exterior.

Courtesy photoElizabeth Lorayne, who owns 19 Federal St. with her husband, Robert Lorayne, holds a historic marker that will soon adorn the home’s exterior.

Editor’s note: This is another in a series of profiles of historic houses in Newburyport that are best viewed by walking – nbpt@3mph.

NEWBURYPORT – The stately, all-brick Georgian mansion at 19 Federal St. was built by one of the wealthiest merchants and ship owners of Newburyport, William Bartlet.

Until last year, 19 Federal displayed a house plaque showing the house was built by Bartlet in 1798, but thanks to the dedicated work of Marge and Skip Motes, the true build date of 1778 was recently confirmed.

Much is known about the shoemaker who turned into a wealthy maritime merchant, but the construction date of Bartlet’s mansion has been debated for more than 100 years.

Most researchers and historians look to John J. Currier’s “History of Newburyport, Mass; Vol II; 1764-1909” book as the source for historic Newburyport. Erroneously, Currier includes that Bartlet built his house in 1798.

Some historians have argued that the build date must have been earlier; speculation based on its spectacular Georgian architecture stylish from 1725 to 1780. A special Georgian feature of 19 Federal is its grand staircase that meets at a common landing from both the front and the back of the house. On the exterior, there are brick bands at the floor levels which define the facade strengthening its proportions as well as large wood dentil moldings at the cornice.

The only way to verify the build date of the house was through a thorough deed search and analysis of primary source documents. The Motes did just that in preparation for the release of their upcoming book about Bartlet called “A Man of Iron Frame and Iron Nerve.”

Through 10 years of research on Bartlet, including a look into the construction date of his house, the Motes have debunked the assertion that the William Bartlet house was built in 1798 and confirmed its 1778 build date. That took quite a bit of persistence and a little bit of serendipity.

William Bartlet purchased two parcels of land on Federal Street: one in 1778 and an expansion lot in 1798. It was Bartlet’s 1798 purchase that has long been acknowledged as the lot for his brick mansion.

Through an extensive analysis of deeds, tax assessment records, probate documents and historical maps, the Motes confirmed that Bartlet’s 1778 land purchase was used to build his mansion house.

The Motes stumbled upon one final bit of history that confirmed their conclusion. When researching another topic, they discovered an important reference to Bartlet and his house in an unlikely source, the book “Life in a New England Town: 1787, 1788; Diary of John Quincy Adams, While a Student in the Office of Theophilus Parsons at Newburyport.”

On Page 39, Adams writes, “The next jury case which came on was between William Bartlett and Daniel Dodge, both of this town. Dodge, who is a mason, engaged to build and plaister (sic) a brick house for Bartlett at a certain price, in the year 1778. In the course of his doing the work the paper currency depreciated considerably, and the question now is whether Dodge is to be held to the original sum, or whether the monies he received at different times is to be reduced by the scale of depreciation at those times.”

Bartlet (alternatively Bartlett) was building his brick house in 1778! It was noted that the parties agreed to a settlement of an undisclosed value.

The Newburyport Preservation Trust’s Historic Plaque Program is a research-based program that documents the build date of a house. Existing plaques and “stories” are not enough to verify the build date; the only way to know for sure is through a search of primary source documents, most importantly, old deeds.

Anyone interested in learning more about the construction date of their house may contact the Preservation Trust or alternatively, visit the archival center at the Newburyport Public Library, which has an extensive repository of documents and knowledge about the process of researching houses.

The next time you are walking around nbpt@3mph, take a moment to stop and look at the wonderful features of 19 Federal St. and admire its new plaque.

Barb Bailey is a researcher for the Newburyport Preservation Trust. She may be reached at barb.bailey03@gmail.com. Look for the release of Bartlet’s biography, “A Man of Iron Frame and Iron Nerve,” coming out in March. For questions about William Bartlet, contact Skip Motes, skipmotes@comcast.net.