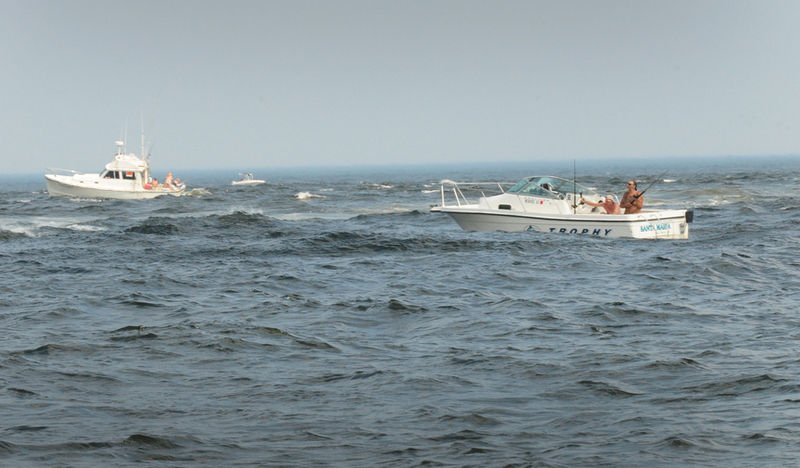 Boaters fish in the mouth of the Merrimack River in a view from a U.S. Coast Guard vessel. They are over "The Bar," a massive sandbar where the fishing can be good but the conditions can be very hazardous. 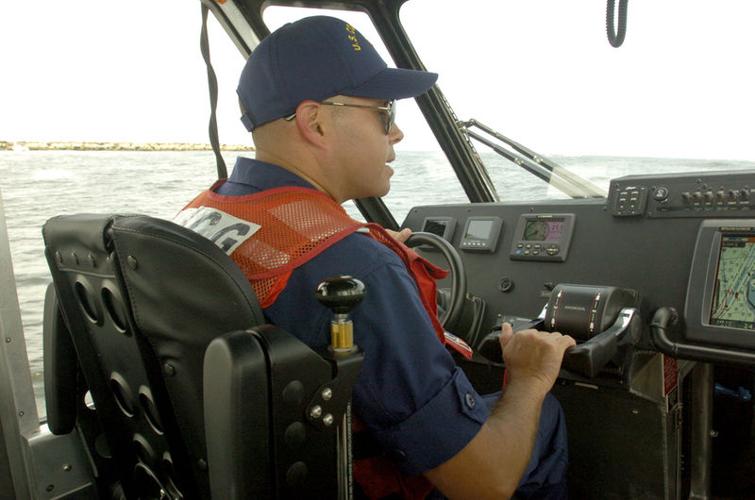 Boaters fish in the mouth of the Merrimack River in a view from a U.S. Coast Guard vessel. They are over "The Bar," a massive sandbar where the fishing can be good but the conditions can be very hazardous.

NEWBURYPORT — Local maritime authorities are all in the same boat when it comes to encouraging safe boating at the mouth of the Merrimack River, and almost a half-dozen recently met with the goal of urging boaters to be more careful.

“There are a lot of boats out now, and we are urging them to remember rules of safety,” said Paul Hogg, harbormaster of Newburyport. “Many boaters have to travel through the jetties, and adding to that is the presence of those engaged in drift fishing.

“We need people to be careful and alert, so that everyone enjoys the boating experience in a safe way.”

Enforcement officials from the U.S. Coast Guard, Massachusetts Environmental Police, Newburyport and Salisbury harbormaster offices and the Coast Guard Auxiliary were among those who attended a recent mini-summit convened to advocate for safety. Boaters have also noticed stepped-up enforcement in the oft-choppy waters where the river meets the sea.

Organizers said part of the impetus to stress boater safety was a collision that took place near the jetties in mid-July. A 16-foot boat was run over by a 25-foot charter-fishing boat. Two boaters in the smaller craft were tossed from their boat when the No Doubt, owned by Rings Island Charters, hit them in the stern and ran through the boat. A female passenger had a serious leg laceration, and the two victims spent the night at Anna Jaques Hospital.

The captain of the charter was charged by the Massachusetts Environmental Police with negligent operation relating to excessive speed and lack of an effective lookout, according to law enforcement authorities.

Senior Chief Mark Dilenge, officer in charge of Coast Guard Station Merrimack River, said in a statement, “If the current hostility and poor seamanship continue, a tragedy will inevitably occur.

“No one wants a maritime accident in Newburyport. The safety of the boating public is the Coast Guard’s first priority.”

Dilenge said that the mouth of the Merrimack is “sometimes treacherous.”

Those in the boating community say that the surface can get choppy and unstable due to convergence of the river’s current, the tides, an underwater sand formation called “The Bar” and the wind. The combination can create enormous swells, and boats are known to sometimes strike the bottom when passing over The Bar.

Also, wakes from large boats can roil the surface between the north and south jetties. Coast Guard officials say that large vessels may produce large wakes when they are entering the bar, especially during an ebb tide.

They say large-vessel operators should try to minimize their speed in a congested area.

Also, posting a lookout to watch for other boats is important, Coast Guard spokesmen say.

Law enforcement authorities say that in the above collision, it is possible that travelers on the larger boat did not see the smaller craft in front of them.

Coast Guard officials released a statement urging that the following rules be followed:

Maintain a proper lookout by sight and by hearing.

Proceed at a safe speed so the captain can react and/or stop if a dangerous situation is identified.

Boaters should respect the rules of narrow channels. Vessels should stay to starboard when possible, and boats should not cross a narrow channel if the crossing is going to impede another craft. Anchoring in a channel should be avoided.

Amy Mahler, a spokeswoman for the Massachusetts Environmental Police, added that those in boats should wear life jackets and must avoid becoming under the influence of alcohol or drugs.

“All agencies want boaters to be safe on the water while having fun,” she said.

Coast Guard officials said law enforcement representatives will be conducting safety patrols in the Merrimack River bar to encourage safety in that highly traveled, often dangerous waterway between the jetties.