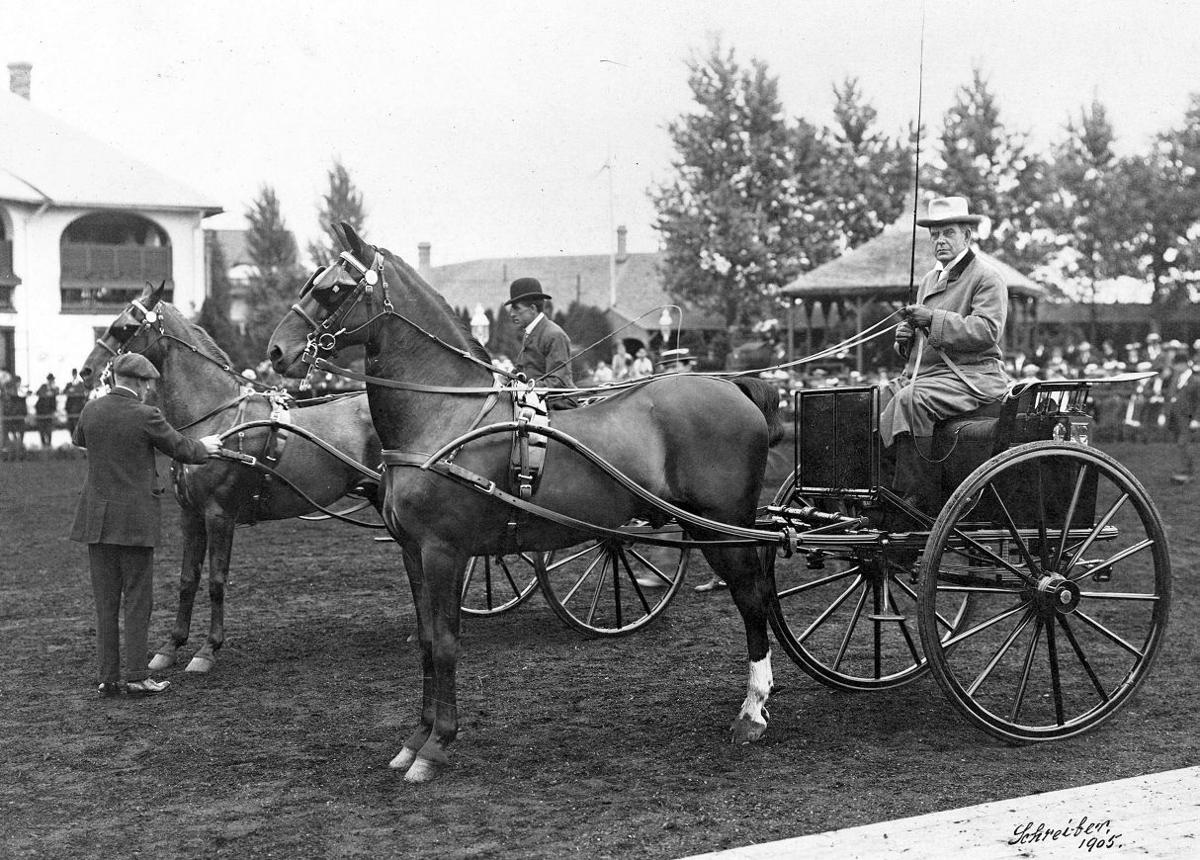 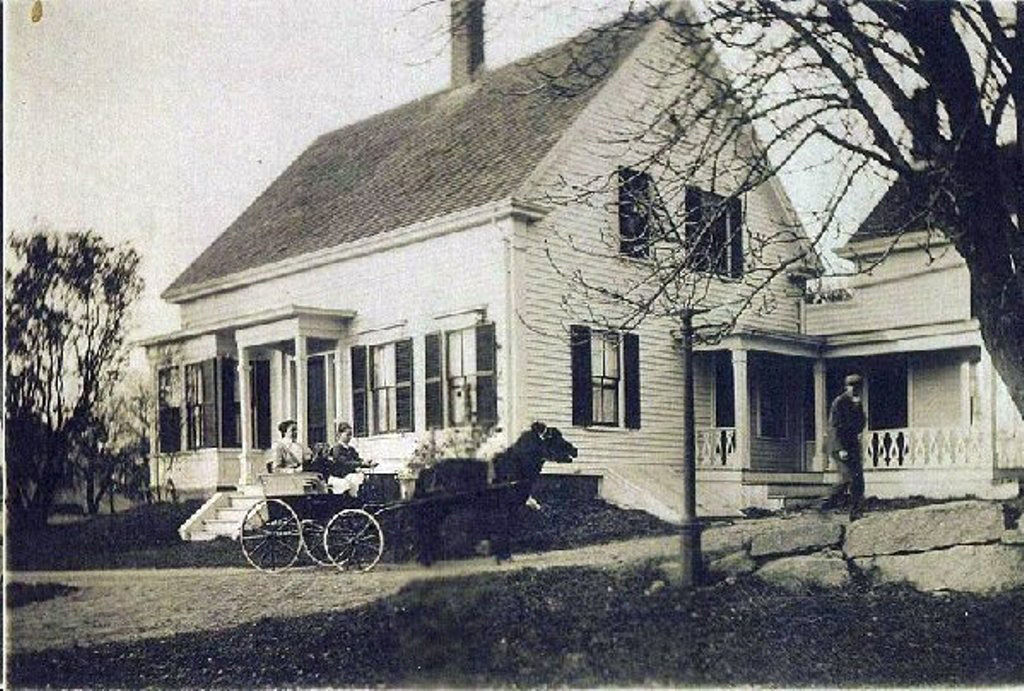 Dorothy and Mary Hart riding their Bailey Phaeton with a full top. It was a common type in the late 1800s and it was made in Amesbury. A riding cart with a pony basket phaeton, possibly a trap which is cut under, made it safer because it is less likely to tip over. The girls loved their pony ''Jago," with their father George Albert Hart looking on at the Hart home.

Dorothy and Mary Hart riding their Bailey Phaeton with a full top. It was a common type in the late 1800s and it was made in Amesbury. A riding cart with a pony basket phaeton, possibly a trap which is cut under, made it safer because it is less likely to tip over. The girls loved their pony ''Jago," with their father George Albert Hart looking on at the Hart home.

Editor's Note: This is another in an occasional stories about local history written by Melissa Berry, a local history buff who has been engaged in research on families and homes throughout the region.

Amesbury definitely held the “wheels” when it came to carriage-making. A vehicle stamped “made in Amesbury” was a guarantee that you were receiving the highest quality from a community that took pride in their work. These manufacturers were never willing to risk their reputation or Amesbury’s.

Streeter Smith, a carriage-maker born in 1838 told a reporter on his 99th birthday, “Amesbury was absent of “idlers.” The town's “people worked hard, had rosy cheeks, went to bed at a proper hour, and huddled around the fire together,” he said. The “spry” widow boasted that he lived through four wars, but nothing was more honorable than witnessing the rosy cheeked Bailey form an empire converting sleighs to cash.

Peter Hoyt, a trustee of the Amesbury Carriage Museum said in its heyday, "the thriving carriage industry provided the lifeblood for the citizens as locally manufactured carriages were shipped the world over.”

“Even when faced with challenges like those experienced during the 1888 blizzard or the great Carriage Hill fire, the close-knit carriage community joined together and responded," Hoyt added. "It was in the spirit of cooperation that neighboring businesses made needed space accommodations for the businesses that were affected by these tragic events.”

The early carriage-making in Amesbury can be traced to men like Charles Patten and John Coffin (1836) who worked by hand making two-wheeled chaises.

A few years later, the 21-year-old JR Huntington would make history by “shaping his ideas into wood, iron, leather, and various articles.” He crafted vehicles which combined “cheapness with beauty.”

Huntington developed a magical formula. His principles were mastered by pioneer carriage builders who spent the early years hammering out the details. The results were phenomenal and put Amesbury on the map.

Hamilton Woolen Mills Corp., powered by the Powow River and steam, owned several carriage businesses. John Hassett had his first position as office clerk there. He worked his way up to private secretary for F. Babcock, one of largest carriage builders.

Hassett eventually formed a partnership with his brother James and George Hodge. At Hassett & Hodge, John ran the office and earned the reputation as one of the best financiers around. He became president of the Amesbury National Bank and was elected president of the National Carriage Builders' Association.

George Briggs, along with John Clarkson, invented a breakthrough umbrella paten for vehicles that automatically held at any desired angle.

Briggs was famous for his Tally-Ho Break, made to carry 20 passengers. Apparently his green thumb held some notoriety as reports from the community garden page noted he picked 253 cucumbers from his small patch and he saw no reprieve. (1872)

Isaac Osgood was Amesbury’s golden boy and mechanical genius. Among his inventions were the fifth wheel and an axle box that would do away with the weekly pilings. At age 84, Osgood still had plenty of vigor. He lectured on his inventions and gave demonstrations to young carriage masters.

Thomas Lane learned the blacksmith trade from his father. There were 11 children in the clan so little Tom adapted strong survivor instincts. He worked for JR Huntington, and while under his employment, invented the Lane cross-spring for carriages.

Lane went into business for himself. His carriages were known throughout the world for their “superb features.” In a 1907 interview with “Motor, Body, & Paint,” Lane noted that his company was prospering and his sales reports were the largest in his career.

Today, there is a beautiful Lane carriage owned by Ken Terry on display at the Amesbury Health Center lobby.

Felix Parry came to the states from Canada when he was 16. He started as a carriage worker until he enlisted in Company H 32nd Massachusetts.

When the Civil War ended, Parry returned and started his own carriage manufacturing company. He invented two patents to the carriage-bow, offering significant improvements. (1879)

Parry also built the first South African coaches in America. The six African coaches were noted for strength and durability that could “traverse the whole continent without a break.”

Before William Biddle made his millions in the carriage-making industry he was a clerk in the machine shop of the Salisbury Mills Manufacturing Co.

He moonlighted as a salesman and baker until he rubbed enough dough together to open a small plant in 1870. Biddle began the manufacture of carriage gears and bodies, and general carriage woodwork. A fire destroyed his building (1876) but that did not hinder his strong desire to succeed.

Biddle regrouped and went into partnership with W. W. Smart erecting one of the largest factory buildings of the time. According to “Automotive Manufacturer,” the company continually expanded several times and with each growth spurt added more additional hands.

In 1882, the sales of the company ran close to three quarters of $1 million, and the hands numbered 270 in all departments.

Biddle’s son William modernized the structure which became Amesbury Brass and Foundry Co. The enterprise was a transformation into a lucrative automobile bodybuilding business.

Another famous marvel from the Carriage Dynasty were the “ghost trains” which passed through the countryside every night “like fast flying processions of spirits from another world.”

The flat cars were loaded with carriages wrapped in tarpaulin to transport them safely to new worlds. Under the white mysterious mass coverings were name engravings of the carriage gods: Currier, White, Folger & Drummond, Boardman, Chase, Hume, Blanchard, Rollins, Pettingill, Miller, Clark, and many more.

Margaret Rice, in “Sun on the River,” notes that the carriage era was the “high point” for Amesbury. By 1891 there were more than 50 carriage manufacturers. The carriage worker families experienced a comfort, grace, and prosperity that could not be matched.

However, it appears that the atmosphere of ingenuity and enterprise has returned. If John Greenleaf Whittier rode his carriage through Amesbury's Market Square today his verse would still hold true: “I have seen no prospect fairer, In this goodly Eastern land.”