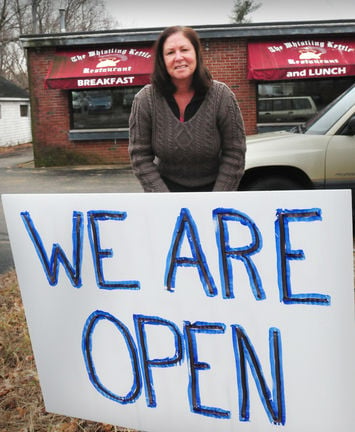 Whistling Kettle owner Maura Costello has signs in front of her Amesbury breakfast and lunch spot letting customers know she is open. 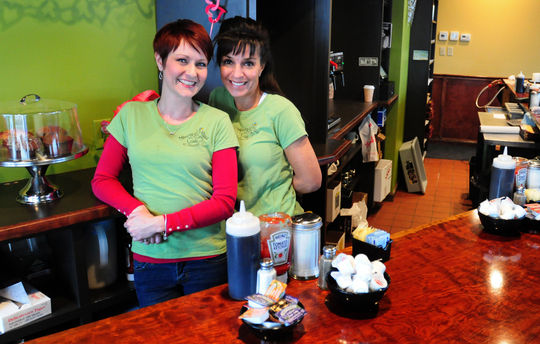 Whistling Kettle owner Maura Costello has signs in front of her Amesbury breakfast and lunch spot letting customers know she is open.

AMESBURY — The Whistling Kettle has been serving pancakes and eggs to its customers for close to 20 years. But this week, owner Maura Costello had to remind her customers that she is, in fact, still open.

There's been some confusion, not only because of the future of the property where she's based, but also because of the growing number of eateries in town serving up breakfast and lunch.

Costello is blaming a newcomer to the town's restaurant scene for circulating the rumors about Whistling Kettle.

"All of my customers are calling in and saying that Morning Buzz is saying that I'm closing," Costello said. "I've been here for 19 years, and I've never had a problem in Amesbury."

But Morning Buzz co-owner Leslie McAdams denied that the rumors are coming from her business, which opened last fall on Friend Street.

"I know they have their loyal customers and I'm not trying to steal any," she added.

That area where the Whistling Kettle is located will soon undergo many changes.

The building at 5 Macy St., near the corner of Main Street and Haverhill Road, is one of several slated to be torn down soon to make way for a new CVS pharmacy and a second mixed-use building.

The corner building where Amesbury House of Pizza was formerly located will also be torn down as part of the project. The pizza shop recently closed its doors, and its owners have said on their Facebook page that they are looking for a new location.

One or two homes next to the Whistling Kettle will either be moved or torn down, as well, depending on whether the former waterworks building behind the restaurant can be preserved.

The CVS project is likely to begin in late March, according to Nick Cracknell, project manager.

Costello, who currently rents her restaurant space, said she expects to sign a lease in one of the new buildings near its current location. She said she doesn't expect her restaurant will be closed "one day" during the transition. However, an agreement that Whistling Kettle will be part of the development plans could not be confirmed yesterday.

In the meantime, Costello said that the signs have helped reinforce the message that the ovens at Whistling Kettle are still very much turned on.

"I haven't had any problems since I put up the signs," Costello said.

The issue highlights the growing number of options for breakfast in town. But McAdams believes there are enough customers to go around.

"This opportunity came up, and it was hard to pass up," McAdams said.

Hollow Cafe, the breakfast and lunch spot that Patricia Carey has been running for 17 years, is also undergoing a bit of transition now. Carey is going through bankruptcy court to settle mounting debt. However, her restaurant will be expanding its menu to include dinner service soon after recently being granted a full liquor license from the town.

Along with Hollow Cafe, Whistling Kettle and Morning Buzz, Amesbury is also home to the local coffee and bakeries favorites Maggie Sundae on Friend Street next door to Town Hall and Andyman Dessert & Baking Co. at Haverhill Road (Route 110) and Hillside Avenue.