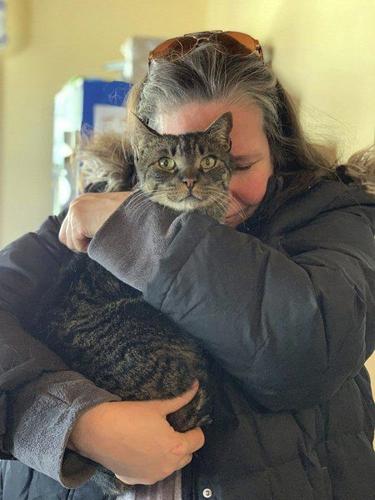 Elinore Repucci of Essex hugs Larry, her tiger/tabby cat who had been missing for five years.Courtesy photo 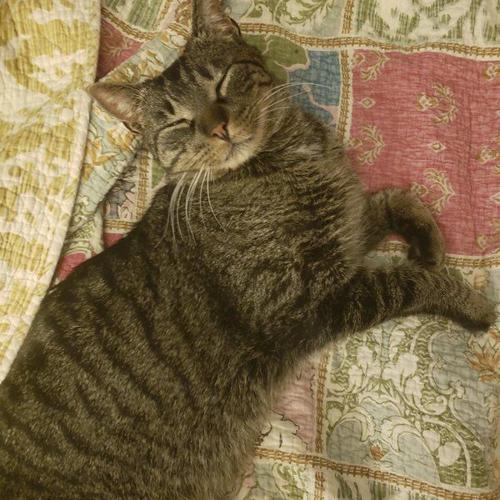 Courtesy photoLarry, a 7-year-old tiger/tabby cat, seems happy to be back home in Essex. He suddenly disappeared in 2013, but was reunited with his owner last week. 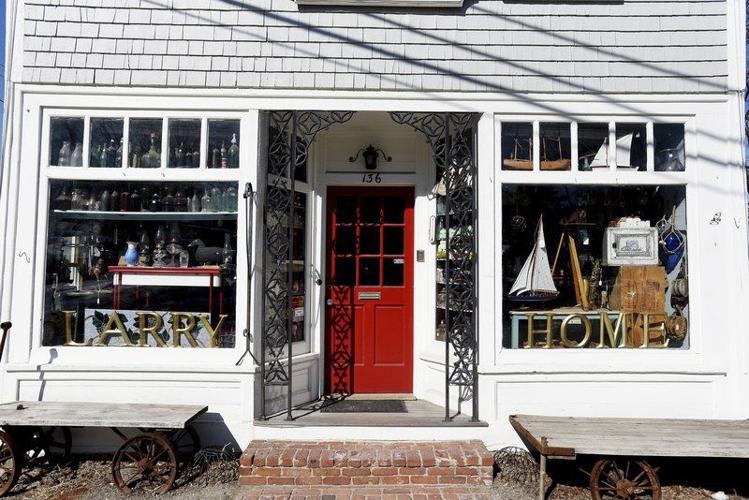 PAUL BILODEAU/Staff photoHoward’s Flying Dragon antique store in Essex is known for leaving messages in its shop window. After Larry the cat was found, the shop changed the words in its front windows to “Larry Home.” Larry had been missing for five years, and his owner is a friend of the shop owner.

Elinore Repucci of Essex hugs Larry, her tiger/tabby cat who had been missing for five years.Courtesy photo

Courtesy photoLarry, a 7-year-old tiger/tabby cat, seems happy to be back home in Essex. He suddenly disappeared in 2013, but was reunited with his owner last week.

PAUL BILODEAU/Staff photoHoward’s Flying Dragon antique store in Essex is known for leaving messages in its shop window. After Larry the cat was found, the shop changed the words in its front windows to “Larry Home.” Larry had been missing for five years, and his owner is a friend of the shop owner.

ESSEX — A cat that went missing more than five years ago has returned to its Wood Drive home after turning up in Salisbury last week.

Elinore Repucci had let her tiger/tabby cat, Larry, out for a walk in August 2013.

“He was an indoor/outdoor cat at the time,” Repucci said. “He always came when he was called and he never went far. It was also drizzling out when I let him outside and I figured he would be back pretty soon. But he did not come back.”

Repucci and her family would spend the next few weeks frantically searching for Larry, but the cat never returned home.

“I live near the woods and I figured, ‘Well, maybe an animal got to him,’” Repucci said. “That was how I reached some closure in my mind.”

As it turns out, Repucci’s imaginary fate for Larry was not the reality. Repucci was at work Thursday when she received a phone call from the Merrimack River Feline Rescue Society in Salisbury.

“I figured they were calling because someone was adopting a pet and they needed a reference or something,” Repucci said. “Then, they asked me if I was missing a cat. I told them I wasn’t but they said they had a cat there that had a microchip that was registered to me. I thought, ‘No way. No way.’”

The cat was indeed Larry. He had somehow traveled the roughly 20 miles between Essex and Salisbury over the past five years.

“It was raining out the day he got lost and I think he hung out in the back of somebody’s truck or something,” Repucci said. “Then, he got driven somewhere and has been trying to get back ever since. Or he was staying with someone who couldn’t keep him any longer.”

The Repuccis got Larry when he was a kitten from Cape Ann Animal Aid in Gloucester, which implanted a microchip in the cat in case he got lost.

Britt Fox Hover, shelter director at the Merrimack River Feline Rescue Society, said a Salisbury man who was feeding birds noticed Larry and decided to take the cat to the Rescue Society.

“He was a good Samaritan who had this stray cat coming to eat the bread bits he was laying out for the birds,” Fox Hover said. “When they are eating bread outside, that is a pretty good indication they are hungry.”

Fox Hover said it was Larry’s microchip that returned him to his Essex home.

“If you see a cat who is eating bird seed or is really, really thin, have them scanned for a microchip,” Fox Hover said. “That could be someone’s cat that they have been missing.”

Although Larry is relatively healthy, he is missing part of a paw, which appears to have healed over time.

“I don’t know if it was frostbite or if it was some animal but it seemed to have happened a long time ago,” Repucci said. “He was thin but he wasn’t emaciated. So I think people were helping him along the way.”

“This is the longest I’ve ever seen a cat missing,” Fox Hover said. “I’ve got a daughter who’s 5½ years old and Larry has been missing as long as she has been alive. That is amazing. So much can happen in that time. It’s a third of a cat’s life.”

Larry shared the Repucci home with another cat in 2013 and now has to contend with two cats and a dog.

“He remembers everything in the house, pretty much,” Repucci said. “He knows where the food bowl is and where everything was. He’s just getting to know the other cats and he’s home. He’s also had such a rough time of it and I don’t I think he cares what anyone else thinks of him. He figures, ‘This is my house and I’m going to go wherever I want.’”

Larry used to be a shy cat, but he seems to have gotten over that.

“He goes right up to people now and meows a lot more,” Repucci said. “I think he may have had to do that for attention.”

Now a big advocate of microchip implants, Repucci asked that people donate either their time or money to local animal shelters.

“The microchip brought him home to me,” Repucci said. “I’d love to meet the person who caught him. That person is very kind to take the time to help an animal.”

Larry will turn 8 years old on March 23. Repucci said she and her family are more than happy to have him back in their lives.