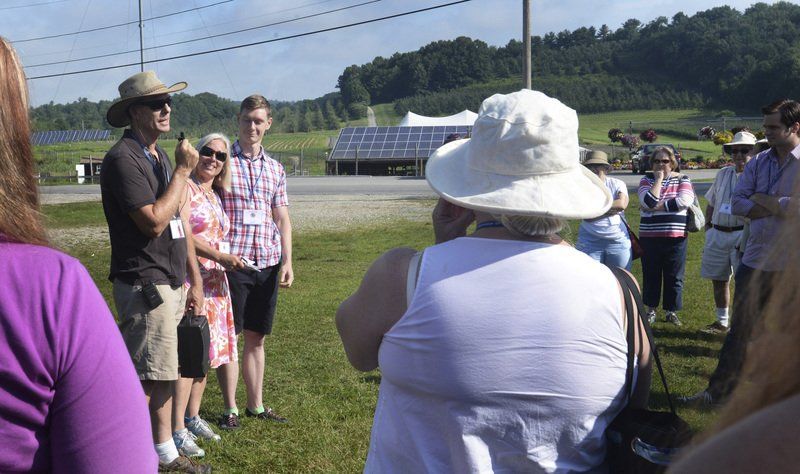 BRYAN EATON/Staff PhotoAgricultural officials from around the country are greeted by Glenn and Karen Cook and their son, Chadd, before a tour of their Cider Hill Farm in Amesbury yesterday. 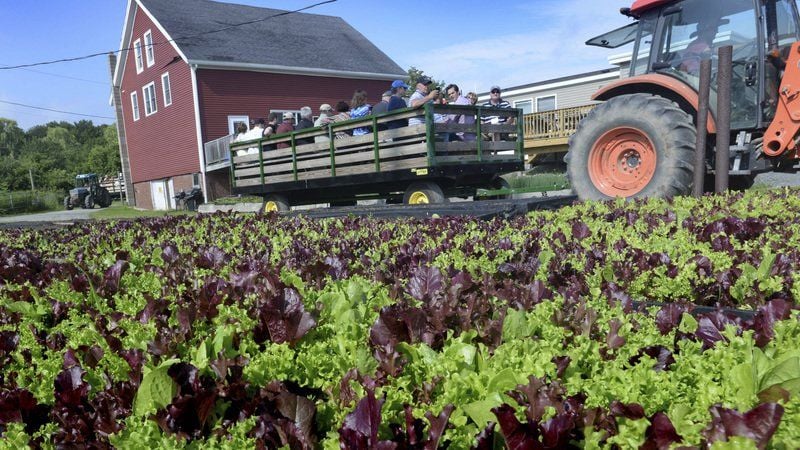 BRYAN EATON/Staff PhotoAgricultural officials from around the country get a tractor ride past a bed of mesclun greens on a tour of Cider Hill Farm in Amesbury. 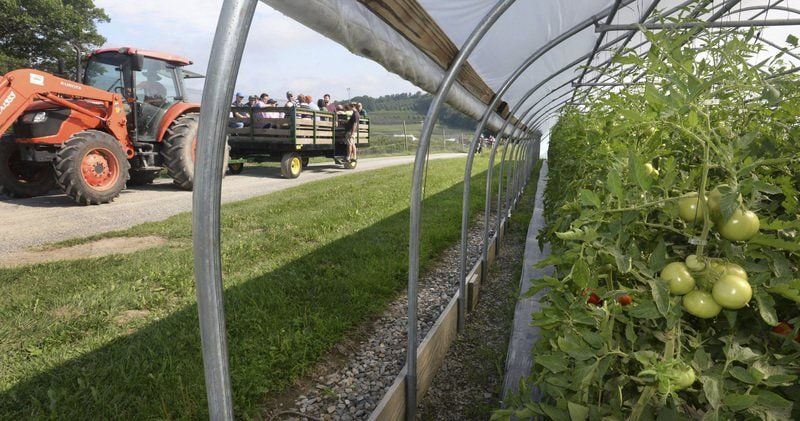 BRYAN EATON/Staff Photo. Agricultural officials from around the country get a tractor ride past a tomato hothouse on a tour of Cider Hill Farm in Amesbury.

BRYAN EATON/Staff PhotoAgricultural officials from around the country are greeted by Glenn and Karen Cook and their son, Chadd, before a tour of their Cider Hill Farm in Amesbury yesterday.

BRYAN EATON/Staff PhotoAgricultural officials from around the country get a tractor ride past a bed of mesclun greens on a tour of Cider Hill Farm in Amesbury.

BRYAN EATON/Staff Photo. Agricultural officials from around the country get a tractor ride past a tomato hothouse on a tour of Cider Hill Farm in Amesbury.

AMESBURY — The announcement of an in-house succession plan and the coming development of a new businesses venture were among the discussion topics at Cider Hill Farm yesterday morning when 60 North American agricultural officials took a wagon tour of the innovative 145-acre farm.

Impressed with the diversity of the small, family-owned farm, the 2015 North American Agricultural Marketing Officials (NAAMO) conference took the opportunity to get an up-close and personal look at Cider Hill’s strawberries, blueberries, apples, pears, scallions, tomatoes, baby lettuce and honey-producing beehives, among other crops, before formally naming Cider Hill their NAAMO “Marketer of the Year.”

Employing about 60 people seasonally each year, Glenn and Karen Cook purchased the former dairy and poultry farm while on their honeymoon in 1981 and have turned it into a city fixture in the years since.

“This is a great, great example of a family that wants to grow the best produce, the best products for their neighbors and consumers,” Massachusetts Department of Agricultural Resources director of agricultural markets Mary Jordan said. “They have 100-plus acres of land and they are always diversifying and looking to be efficient. I couldn’t think of a better farm in this area, in the sense of being a first-generation (farm), and also the diversity of what they have done. They have been through a lot of trials and tribulations and it is just a fabulous, fabulous place.”

Encompassing the entire North American continent, the international organization brought representatives of each state or Canadian province’s departments or ministries of agriculture.

Assistant Deputy Minister at Ontario Ministry of Agriculture, Food & Rural Affairs George Borovilos said that he was impressed with Cider Hill’s green energy production as well as their eco-friendly policies to deal with wildlife and pest concerns.

“This is a family with an entrepreneurial spirit that is also willing to innovate and understand how the consumers are changing,” Borovilos said. “Consumers are changing in the sense that they want to know how their food is produced. There is an environmental, social, as well as an economic consciousness.”

The Cooks also announced yesterday a plan to have 27-year-old son Chadd, who recently endured a seven-year battle with Lyme disease, emerge as the family’s successor to the farm and the business in the next 10 to 15 years.

“Karen and I will always be a part of it,” Cook said. “We see it as a partial retirement, just passing the torch on, but we have a lot of people here who are more than qualified to carry on a lot of the operation. Chadd would be more involved with his new enterprises and oversight.”

Among the farm’s new enterprises, according to Cook, is that Cider Hill will be getting into the hard cider business as early as next spring.

“We will be doing production over the late winter,” Cook said. “The facility will probably be built through the late fall.”

“Ninety percent of our crop that we grow, 70 acres of production is all retail,” Cook said. “That is something that these people don’t have the benefit of because they come from large agricultural districts where it is commodity farming. So this is unusual for them to see.”

“We started with our faith,” Karen Cook said. “Glenn and I stood in the field and we knelt down, and we had our Bible in hand, and we prayed to God to bless us. We asked Him to enable us to be good stewards of His Earth and land, and that all of the people who came on the farm property and soil would feel His presence and love and we are bearing the fruit of that today.”