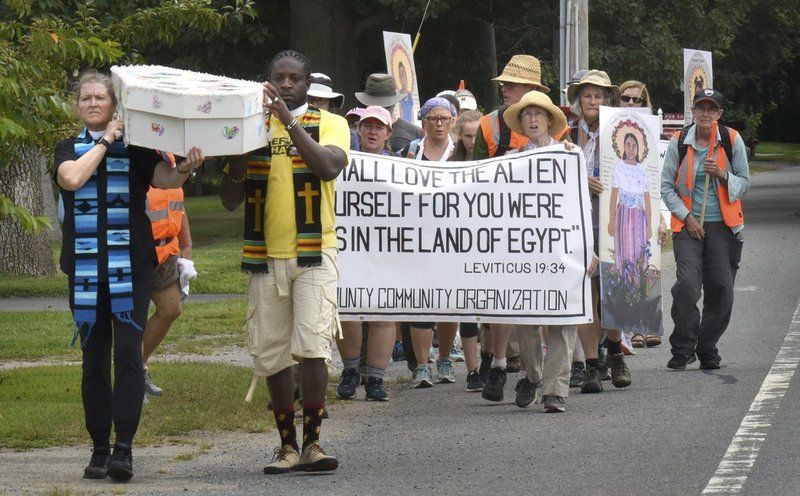 BRYAN EATON/Staff photoA group of religious and faith-based individuals march along High Road in Newbury on Wednesday. They are carrying a white cardboard coffin to protest the detention of children by Immigration and Customs Enforcement. 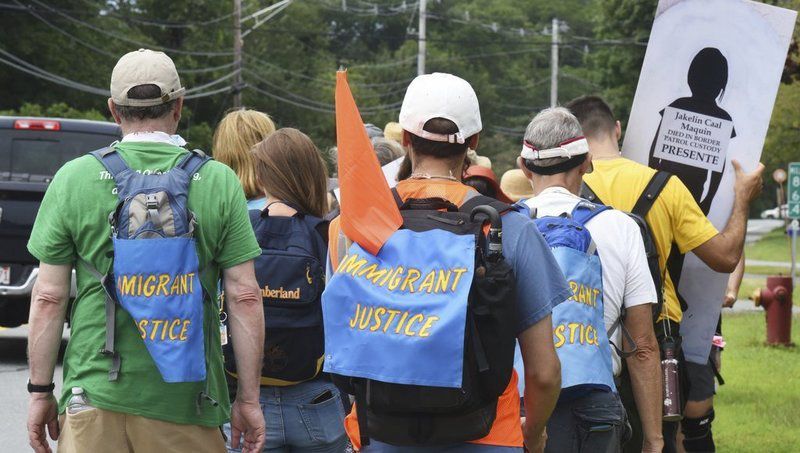 BRYAN EATON/Staff photoA group of religious and faith-based individuals march along High Road in Newbury, carrying a white coffin to protest the detention of children by Immigration and Customs Enforcement.

BRYAN EATON/Staff photoA group of religious and faith-based individuals march along High Road in Newbury on Wednesday. They are carrying a white cardboard coffin to protest the detention of children by Immigration and Customs Enforcement.

BRYAN EATON/Staff photoA group of religious and faith-based individuals march along High Road in Newbury, carrying a white coffin to protest the detention of children by Immigration and Customs Enforcement.

NEWBURYPORT — A group of about 25 faith leaders and community activists followed a child-sized coffin toward downtown Newburyport on Wednesday as part of a six-day "funeral procession" from Boston to a Dover, New Hampshire, facility where Immigration and Customs Enforcement is detaining undocumented immigrants.

The protesters plan on carrying the white cardboard coffin, which is decorated with the names and photos of seven children who died while in ICE custody, on a 76-mile journey that began Monday morning at the JFK Federal Building and will end Saturday at the Strafford County House of Corrections. They will converge there with multiple other New England groups carrying out similar treks with hope of helping to bring an end to immigrant detention.

"It's been an emotional journey. There's been a weightiness to it," said the Rev. Wendy von Courter, minister for the Unitarian Universalist Church of Marblehead and a member of the Essex County Community Organization, as the marchers finished their lunch at Tendercrop Farm in Newbury on Wednesday, taking a break from the day's 10-mile walk from their previous stop in Danvers.

Organizers said they hope the march will persuade presidential candidates and elected officials to accept responsibility for the deaths of immigrants in ICE custody, and encourage them to take action to prevent it in the future.

"We've personally invited every presidential candidate to place their hands on the coffin and feel the weight of their deaths," von Courter said. "We want them to say that we are causing these deaths as a nation. We want leadership to halt all family separations, detentions and deaths until Congress passes just immigration reform."

The Rev. Andre Bennett, an ECCO board member and pastor for youth and young adults at Zion Baptist Church in Lynn, added that in addition to demanding  captives be set free, the group also hoped to raise awareness of problems caused by immigrant detention so that more people would rally to join their cause.

"The power of the people is greater than the people in power, and so we're giving the people an opportunity to tell us what they're going to do," Bennett said. "We want them to hear the cries of these children — not only the dead, but of the living who are suffering because of what we continue to enforce upon them."

Dr. Alexandra Pineros-Shields, executive director for ECCO, added that the march has also been emotional for those carrying the coffin.

"It is a moving experience," Pineros-Shields said. "You realize the pain of the families who are losing their children through separation or death — hour after hour, you're staring at those faces."

As the group marched down High Road in Newbury on Wednesday afternoon, they received friendly waves and other small gestures of support that they said have been plentiful since they left Boston.

Most notably, Bennett said, was when a woman in Topsfield drove past the group, turned around and came back to offer a cooler full of bottled water to the marchers.

"She parked on a side street and said, 'Take.' People are moved. We're getting the support of the masses," Bennett said, adding that he also hopes to make an impression on drivers who shout criticism on the road.

"We have a few people who are going to try and get their attention in a negative way, and these are the ones we want to call to because we want to say that while you're doing this, you're a part of this system that is making money on the bodies of children," he said.

The marchers planned on spending Wednesday night at Central Congregational Church, where they also would be guests at a public dinner. They will hit the road again Thursday morning, marching through Amesbury on their way toward their next checkpoint in Exeter, New Hampshire, that afternoon.

Further emphasizing the march participants' dedication to their cause, von Courter said they would continue to protest until their demands are met.

"We want the candidates to know that we're going to keep on coming," von Courter said. "That coffin is going to appear until they agree to end detentions."