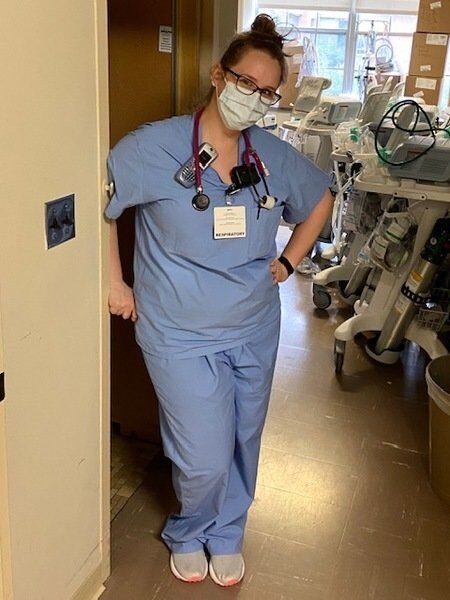 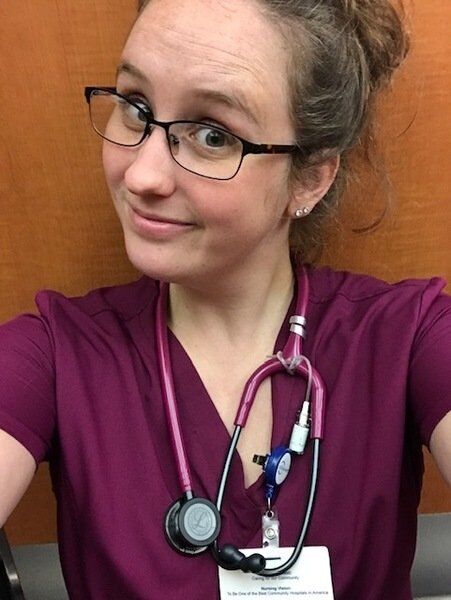 AMESBURY — Jenn Osgood decided to make a career change from retail to health care two years ago. She had no idea how important the move would become.

Osgood, 35, has been a city resident since she was 10 years old and decided to go into early education after graduating from Amesbury High School. But Osgood soon found that teaching wasn’t for her while she was attending Salem State University, and went into the retail industry instead on a full-time basis.

Several years later, again looking to make a change, Osgood enrolled at Northern Essex Community College in 2018, where she would end up earning an associate degree in respiratory care this past spring.

“Respiratory care is a two-year, associate degree and it’s more doable than the four-year nursing degree,” Osgood said. “We deal with ventilators and things like that in the hospital. We take care of things like airways, nebulizer treatments and tracheostomies.”

Osgood worked her way through her clinical rotations at Brigham and Women’s Hospital in Boston and was working at Lowell General Hospital under her student license last year — all while working roughly 30 hours a week at Seaglass Restaurant and Lounge in Salisbury.

Osgood and her fiance had just returned from a vacation in Costa Rica when the COVID-19 pandemic began spreading across the U.S. in March.

“They kicked us out of the clinical rotations in mid-March and we never went back after spring break,” Osgood said. “Whomever held a position permanently were the only people who could be there at that point.”

Osgood was, however, still working as a respiratory technician at Lowell General Hospital and saw a progression of patients begin to build.

“Even for a little community hospital like Lowell, it was overwhelming,” she said. “Once COVID-19 started ramping up, I was there 40 hours a week, doing whatever I could do to help, that was still under my license. I couldn’t work with ventilators and that sort of thing but I could help with the small things on the floors. Basically, I immersed myself into it and did whatever I had to do to help out. What do they call it, a baptism by fire?”

All of the hospital’s respiratory therapists were working 60 to 70 hours a week just to get through the first stages of the pandemic, according to Osgood.

“The whole hospital banded together to get done what we needed to get done,” she said.

Osgood made it through her final semester and graduated with honors in the spring and was even mentioned in Northern Essex Community College President Lane Glenn’s speech.

“We figured it was a good way to get respiratory care out there in the world,” Osgood said. “We need more respiratory therapists. But having the president of the college mention your name at graduation also makes you think, ‘Oh, maybe I did do something right.’”

Osgood is now working full time in respiratory care at Brigham and Women’s Hospital and said she is very happy.

“The commute stinks but I love it, I absolutely love it,” she said. “If you told me two years ago that I would be commuting to Boston full time and I would actually work in an ICU every day, I would tell you that would be a dream, coming from retail.”

Respiratory care has a relatively smooth career path within health care, according to Osgood.

“We have slowed down at the hospital for now but that doesn’t mean anything,” Osgood said. “People can go and job shadow a respiratory therapist at any hospital. Northern Essex Community College does it, but also North Shore Community College has a respiratory care program. People in this area can choose either one, so reach out.”