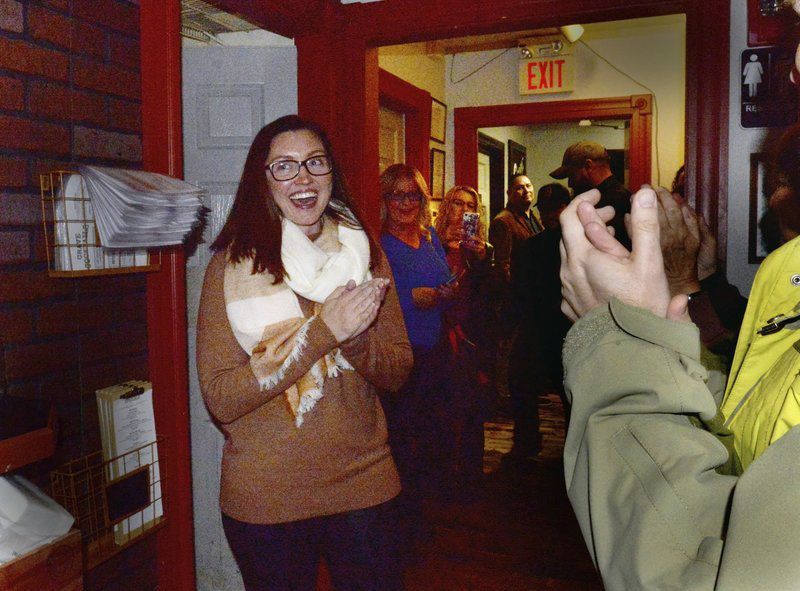 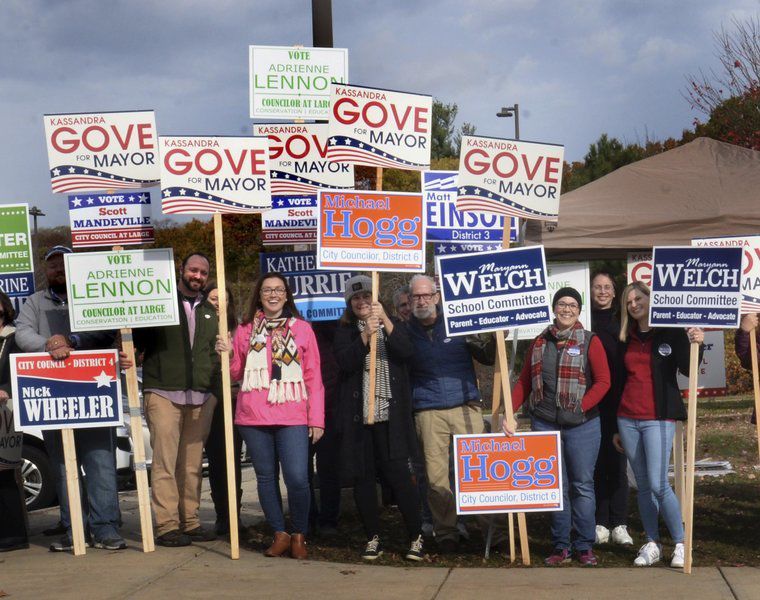 BRYAN EATON/Staff photoAmesbury Mayor-elect Kassandra Gove poses with supporters outside the polling station on Election Day. Some supporters joined Gove in Market Square on Wednesday morning to thank voters for electing her mayor.

BRYAN EATON/Staff photoAmesbury Mayor-elect Kassandra Gove poses with supporters outside the polling station on Election Day. Some supporters joined Gove in Market Square on Wednesday morning to thank voters for electing her mayor.

AMESBURY — The Amesbury Democratic City Committee fared well in the election Tuesday, placing all but one of its 10 endorsed candidates in office.

Mayor-elect Kassandra Gove ran as an independent and declined an endorsement from the committee, but defeated incumbent Ken Gray,  2,306 to 2,149.

Gove ran a campaign based on transparency, thoughtful economic development, long-term capital planning and a student-centered focus on education.

All City Council and School Committee candidates endorsed by the Democratic City Committee, except for District 6 council candidate Michael Hogg, were victorious.

Former Conservation Committee member Adrienne Lennon received 1,812 votes in her first bid for an at-large council seat and will be joined by Scott Mandeville, who garnered 1,677.

Current Councilors Joe McMilleon and Mark Roccograndi will not be returning after receiving 1,543 and 1,151 votes, respectively.

Independent at-large Councilor Stephen Stanganelli did not receive an endorsement from the Amesbury Democrats but still managed to pick up the most votes with 2,971.

Stanganelli said Tuesday night that he believed public concerns about the $60.5 million elementary school project, scheduled to begin construction next year, had a lot to do with his overwhelming win.

Anthony Rinaldi also received an endorsement from the Amesbury Democrats and won his bid for the District 2 council seat with 384 votes while Tim Osgood only received 304 votes.

District 6 Councilor Rick Marggraf was not endorsed by the Amesbury Democrats but won a second term with 341 votes while Hogg received 287.

All School Committee candidates endorsed by the Democratic City Committee won as well, with Maryann Welch picking up the most votes for a four-year seat with 2,655. Katherine Curry and Mel Webster also won seats with 2,268 and 1,966 votes, respectively, while David Haraske picked up 1,228 votes and current School Committee member Joe Mroszcyk received 1,060 votes.

Welch attributed her win to a desire for change among the electorate.

Jana deBeer was not endorsed by the Amesbury Democrats but still won a two-year seat after receiving 1,985 votes, besting former City Councilor Bob Lavoie by 369 votes.

She thanked Lavoie for his many years of service to the city and for running a good race, adding that her victory was due to "a combination of things."

Gail Browne received the most votes to sit on the Board of Library Trustees for another four years with 2,438 ballots cast. Brenda Rich received the second highest number of votes for the board with 2,403 votes. Newcomers Michele Lamont and Delia Anne Rinaldi received 2,132 and 1,892 votes, respectively, while James Sullivan collected 1,666 votes and will not sit on the board.

Philip Dandurant will serve another four years on the Housing Authority after receiving 2,613 votes and will be joined by Norman Bellavance, who earned 2,329 votes.