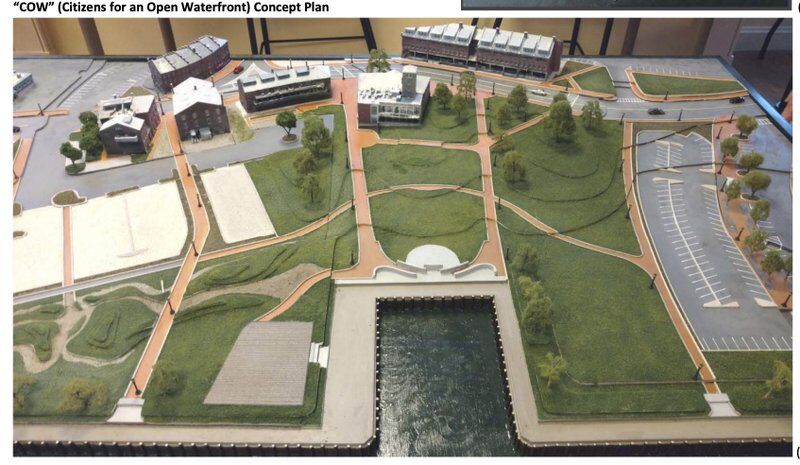 Courtesy imageA concept rendering from Citizens for an Open Waterfront on what the expanded Market Landing Park could look like. Firehouse Center for the Arts is at the center in the background. 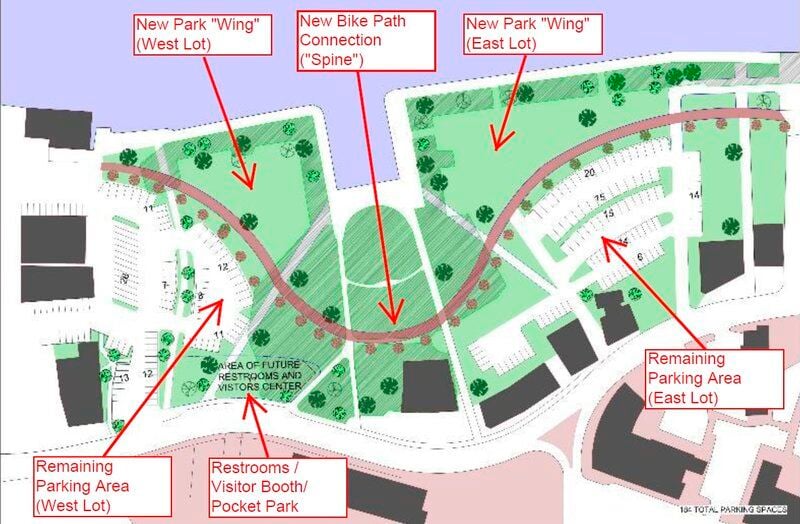 Courtesy image A preliminary rendering of plans for the expansion of Market Landing Park on Newburyport’s waterfront.

Courtesy imageA concept rendering from Citizens for an Open Waterfront on what the expanded Market Landing Park could look like. Firehouse Center for the Arts is at the center in the background.

Courtesy image A preliminary rendering of plans for the expansion of Market Landing Park on Newburyport’s waterfront.

NEWBURYPORT — The city has chosen Sasaki Associates to design the Market Landing Park expansion, seen as a major upgrade of open space for the scenic waterfront.

Sasaki is the company that in the late 1960s and ‘70s crafted a master plan for downtown which helped save historic features, including Inn Street and Market Square, from demolition under urban renewal.

The park expansion would incorporate swaths of two parking lots that were reclaimed over the past year for green space.

The announcement came at the City Council meeting Monday, with council President Jared Eigerman proposing the transfer of $150,000 from Newburyport Redevelopment Authority funds for a contract with Sasaki.

An ad hoc committee of the council, Mayor Donna Holaday, multiple department heads and residents recommended Sasaki, a Watertown-based architecture, planning and urban design company, out of 14 bidders. The council is expected to vote on the transfer at its meeting March 8.

In its proposal to the city, Sasaki Associates wrote, “We understand the planning and design of the expansion of Market Landing Park to be an incredible, once-in-a-lifetime opportunity for the city of Newburyport.”

On Wednesday, Holaday told The Daily News that the review committee unanimously supported the Sasaki proposal.

She said the committee recognized the company’s history of work in the city “dating to the 1960s and 1970s developing the downtown master plan under then Mayor (Byron J.) Matthews preserving our downtown, including the creation of Inn Street and the harbor walk. Sasaki has extensive expertise in the design and construction of waterfronts, plazas, parks and public spaces.

“It has been a very long and challenging process, and I am very pleased that we will finally begin the work on the open space/park on our central waterfront that our community strongly supports,” she said.

The mayor said once the council approves the transfer of funds, “we anticipate (Sasaki) will begin the process shortly thereafter with design scheduled to progress through August.”

In its proposal, Sasaki Associates wrote, “Expansion of the central green embayment strengthens people’s access to the Merrimack River, reinstating the historic gesture of creating common passage to the water for all.”

The two new parcels that would make up the park expansion will combine with the central piece behind the Firehouse Center for the Arts “to address the demand on increased space for public health and wellbeing – creating a vibrant place to be active, to create, to play and engage with the river.”

The company’s experience in the city dates back to the late 1960s, but it was in 1997, as part of the city’s downtown redevelopment, when Sasaki “designed the restoration of this 23-acre historic downtown and waterfront. The redevelopment includes plazas and walkways, using traditional materials, a fountain, and lighting, parking, street and planting improvements,” the company said.

In 1980, the company was hired to study the waterfront, first producing an engineering study and cost analysis for 1,300 feet of new bulkhead along the Merrimack River, followed by more detailed engineering studies that led to construction of a waterfront promenade and park.

In its proposal for the current project, the company said it would study the city’s newly released Climate Resiliency Plan; review the 2003 Waterfront Strategic Plan, open space and recreation plans; and study historic maps, arts and culture resources as well as reports and design documents relating to the Clipper City Rail Trail. Part of the rail trail will wind through Market Landing Park.

In its proposed schedule, Sasaki will meet with city Planning Director Andy Port and members of the ad hoc committee, develop schematic designs for review, hold meetings with city officials and the general public for input, and finalize construction plans and produce a cost estimate for the project by August.

Richard K. Lodge is editor of The Daily News.