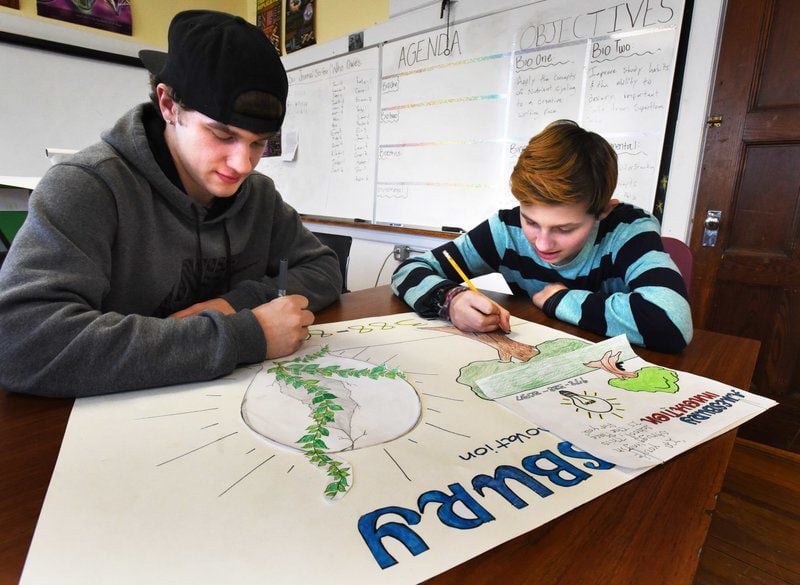 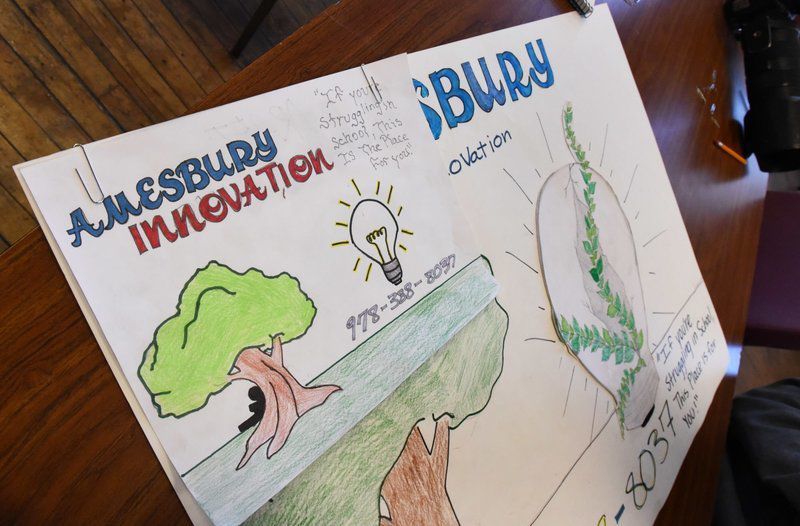 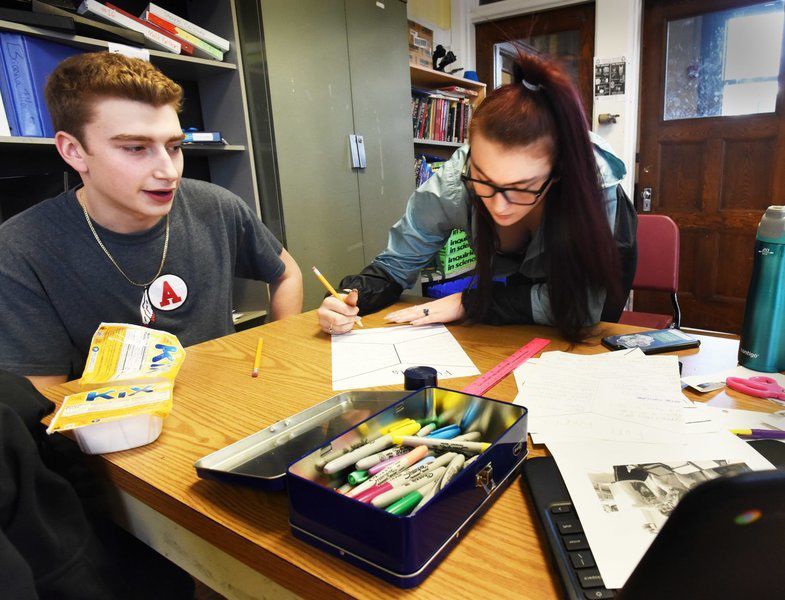 BRYAN EATON/Staff photoElijah Jackman, left, and Sierra Cote, both 19, work on fliers that contain more information than do the billboards being created for the public relations campaign at Amesbury Innovation High School.

BRYAN EATON/Staff photoElijah Jackman, left, and Sierra Cote, both 19, work on fliers that contain more information than do the billboards being created for the public relations campaign at Amesbury Innovation High School.

AMESBURY — Not all public high schools need to dedicate class time to dispelling myths and rumors but sometimes an alternative high school must.

Faced with sometimes outlandish claims about their school, the staff and students at Amesbury Innovation High School are turning public misconception into a school project, the results of which they say will soon be seen across the city.

"The idea is to dispel the myths about the school and give information about what the school actually offers and does for its students," guidance and adjustment counselor Bethany Noseworthy said. "Some people say, 'You don't get a high school diploma' from this school or 'It is a place for failure and dropouts.' That is a very common misperception about who we are."

Formerly known as Amesbury Academy Charter Public School, Amesbury Innovation High School was designated as such in 2015, and is an alternative high school program for at-risk students.

Principal Eryn Maguire said a program day in December centered around public relations has blossomed into a student-driven public outreach project that will produce live presentations, video commercials and even a billboard.

"We have been looking to build the public relations of the school forever," Maguire said. "What better voice for that to come from than from the students?"

Each of the school's 44 students has been assigned to a public relations group, such as the billboard and television commercial groups.

Noseworthy has been leading a three-student team of freshmen Kennith Chateauneuf and Jazalyn Reader, and senior Shayla Cassidy in creating a presentation for middle school families and students.

Chateauneuf said the common misperceptions are just that and the school has welcomed her with open arms, as well as a much smaller student-to-teacher ratio.

"I am trans and I have had a lot of acceptance here," Chateauneuf said. "Now, I actually like going to school."

Each student can also take part in Amesbury High School's extracurricular activities, including music and athletics, something Cassidy wants potential students to know.

"The student body here is one of the most accepting groups I have ever met," Cassidy said. "I would rather be here than at home."

Each of the completed projects will be posted on the Innovation High School's website, social media, a billboard and also on Amesbury Community Television.

"We are working on our interview questions and we have already done our storyboards," Melanson said. "(Amesbury Cable Television Executive Director) Russ Monroe was kind enough to bring us one of their high-def cameras and we hope to start filming soon. The kids want to get the message out that this is a great place."

He said social media should also provide an excellent outlet for his group's final product as well as YouTube.

"We want to get it to as many different places where people can access it as possible," he said.