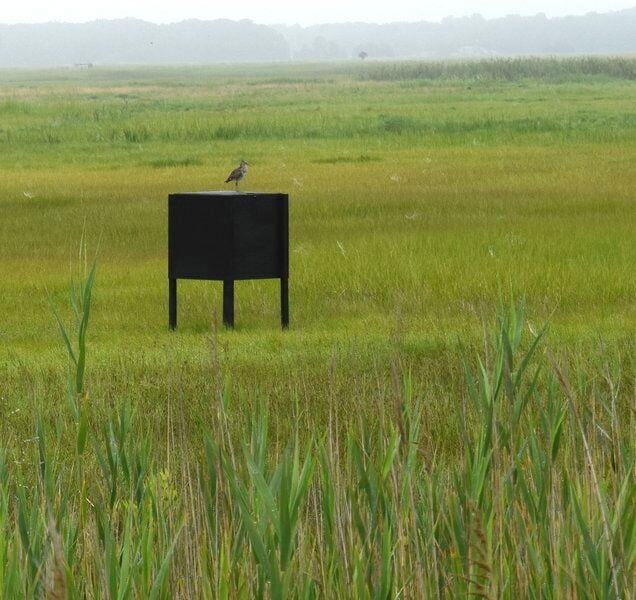 A bird perches atop one of the many greenhead traps in the marshes on Plum Island. The biting flies are drawn to the black boxes and become trapped. 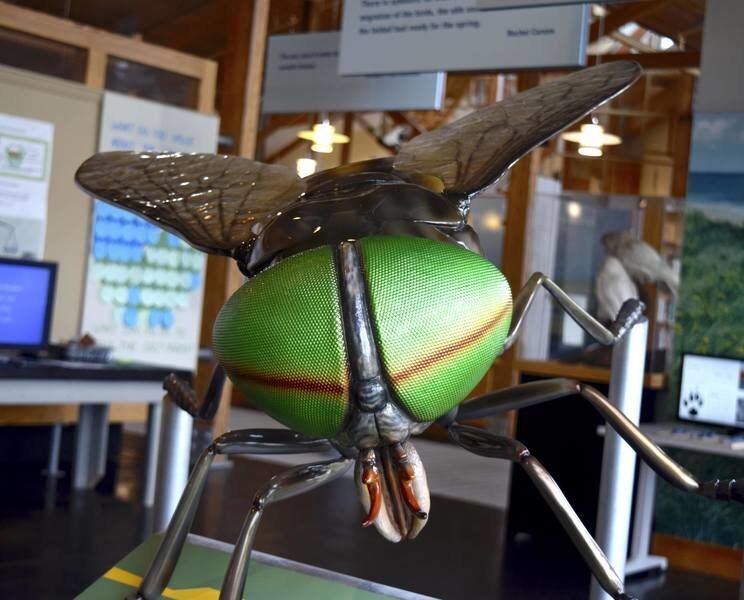 The multifaceted green eyes of a 4-foot-long greenhead fly model on display at the Parker River National Wildlife Refuge visitors center shows the menacing jaws of this seasonal biting pest.

A bird perches atop one of the many greenhead traps in the marshes on Plum Island. The biting flies are drawn to the black boxes and become trapped.

The multifaceted green eyes of a 4-foot-long greenhead fly model on display at the Parker River National Wildlife Refuge visitors center shows the menacing jaws of this seasonal biting pest.

NEWBURYPORT — Greenhead flies have made their infamous return to Plum Island over the past couple of weeks and social media is buzzing with people wondering how long they will be here and how to avoid getting bitten.

At Parker River National Wildlife Refuge, staff members are used to the calls.

Ranger Matt Poole, visitor services manager at the refuge, said people always ask the same question, “How are the greenheads?” and staff members are quick to quip, “They’re fine, and you?”

Though Poole is not an expert on insects, he said greenheads seem to have arrived a bit earlier than usual this year, but the numbers appear to be about average. Peak season typically lasts about three to four weeks.

“They put the fear of God in people, that’s for sure,” said Poole, who has worked at the refuge for close to 11 years.

Only female greenheads bite, using the protein from blood to lay their eggs, according to the U.S. Fish & Wildlife Service. While mosquitos numb a host’s skin prior to feeding, greenheads tear open skin and leave big welts.

There is a lot of debate over whether insect repellants work to deter them, but the general consensus is that greenheads are resistant to pesticides.

The refuge recommends that people wear long sleeves, pants and a hat for best protection. Light colors are best because greenheads are drawn to dark colors – evidenced by the black painted boxes that dot the salt marshes this time of year to trap the pests.

Greenheads seem to prefer lower levels of wind and plenty of light. They are most active from 10 a.m. to dusk, the refuge reports.

It’s smart to avoid wearing skin and hair products with strong fragrances and perfume. Greenheads are also attracted to salt water and sweat.

Though they may be pesky to humans, greenheads serve as an important part of the salt marsh food web, Poole said, noting that a variety of birds eat them. This includes tree swallows, purple martins and eastern kingbirds.

Both male and female adults are great pollinators.

Additionally, countless greenhead larvae are eaten by shorebirds, fish, crustaceans and other smaller salt marsh animals each spring, according to information at the refuge visitor center.

Most of the refuge beach remains closed to the public as the piping plover breeding season continues. A patch of beach accessible via the Lot 1 boardwalk recently reopened, though.

The visitor center reopened earlier this month and is open each day from 9 a.m. to 4 p.m.

Educational programs will likely return later this month after being on hold for the past 15 or so months amid the COVID-19 pandemic, Poole said.