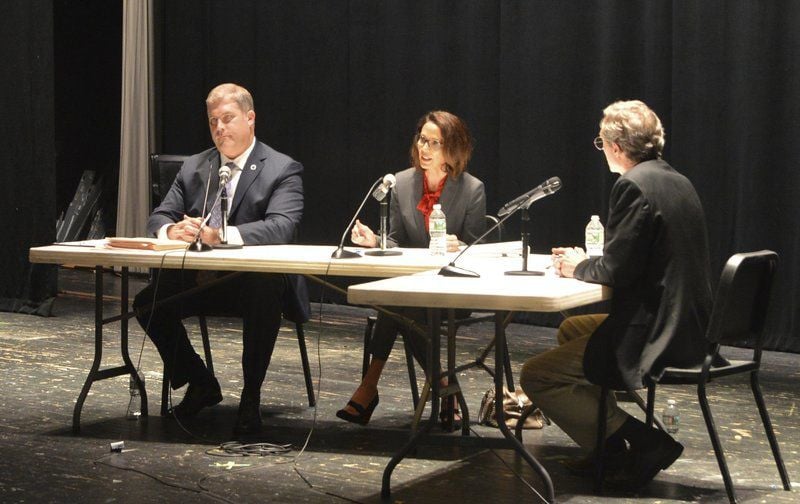 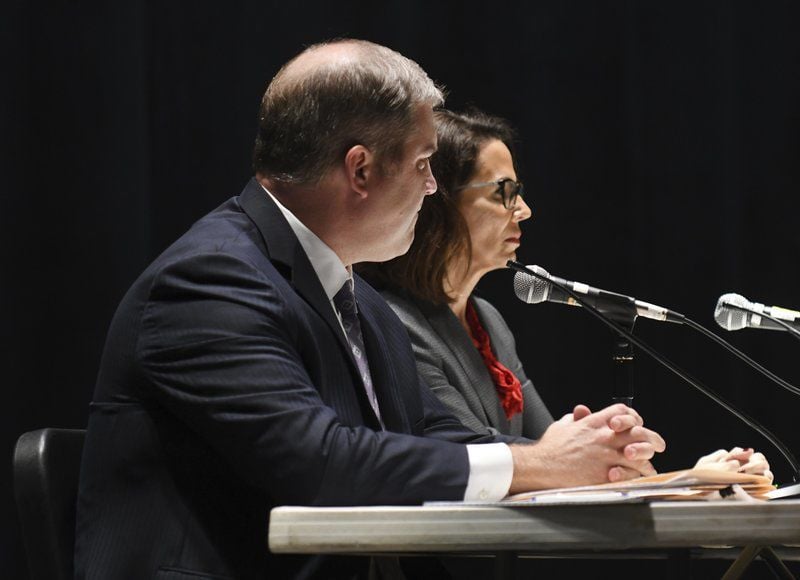 The two candidates fielded questions before a crowd of more than 100 boisterous people in the Rupert A. Nock Middle School auditorium. The  event was broadcast live in Newburyport, Amesbury and Salisbury.

Kelcourse, first elected to his seat in 2014, is running for a third term. He has often touted the relationships he has developed with Gov. Charlie Baker, Lt. Gov. Karyn Polito and House Speaker Robert DeLeo.

Rocco-Runnion, a political newcomer, said she is "ready to be your state representative and serve the communities of Amesbury, Newburyport and Salisbury."

Combined sewer overflows from at least four upstream sewage treatment plants have sent millions of gallons of human waste into the Merrimack River. Kelcourse said his short-term plan to deal with the problem would be to "pass a bill so that we can notify the public when we have sewage overflows."

"The relationships I have with (the other representatives in the Merrimack Valley) are going to bring the stakeholders together, the superintendents and others and come up with what should be a really good solution that is going to be manageable from a cost perspective," he added. "But it is also going to protect the health, safety and welfare of the citizens."

Rocco-Runnion said a Reverse 911 system and measuring the amounts of sewage that go into the river would work well in the short term, adding, "Massachusetts needs to take up a Fair Tax amendment" to fix the problem in the long run.

"This is a surtax on people who earn over $1 million," Rocco-Runnion said. "That money would go specifically to education and infrastructure like repairing the sewage underneath our roads and sidewalks."

The Gun Owners Action League of Massachusetts recently gave Kelcourse a grade of C in its most recent report on legislative activities.

While the state representative said he was not aware of his rating from the group, he did support a bill to ban bump stocks and trigger cranks as well as "the red flag bill."

"Nobody wants anybody who was unfit to carry a firearm to have a firearm," Kelcourse said. "I am in full agreement with that. We have the toughest gun laws in the country here in the Commonwealth of Massachusetts. I am happy with that and I always have been."

After recently receiving support from Moms Demand Action for Gun Sense, Rocco-Runnion said she is "proud Massachusetts is leading the way."

"I'm proud but I think there is always more work to do, especially when it comes to keeping our children safe in school," Rocco-Runnion said. "That to me is the biggest concern."

Kelcourse said the environment and housing are among the biggest challenges facing each of the three communities in the First Essex District.

"When I first got into office, Lake Attitash was having some problems," Kelcourse said. "I have to give credit to (Amesbury City Councilor Joe McMilleon and Amesbury Mayor Ken Gray), we have done a really good job of cleaning up that lake. That is an environmental issue we were able to get $353,000 to help remove the cyanobacteria from the lake."

Rocco-Runnion​ said challenge posed by education and infrastructure are critical.

"The education foundation budget​ did not get restructured this last legislative session," Rocco-Runnion said. "It hasn't been changed since 1993 and it is losing money from special education and health care in the millions of dollars. We really need to restructure that."

The forum was sponsored by The Daily News with media partner NCN Hub, the Newburyport community access cable studio.

For more on the forum, see Newburyportnews.com and Friday's print edition of The Daily News.