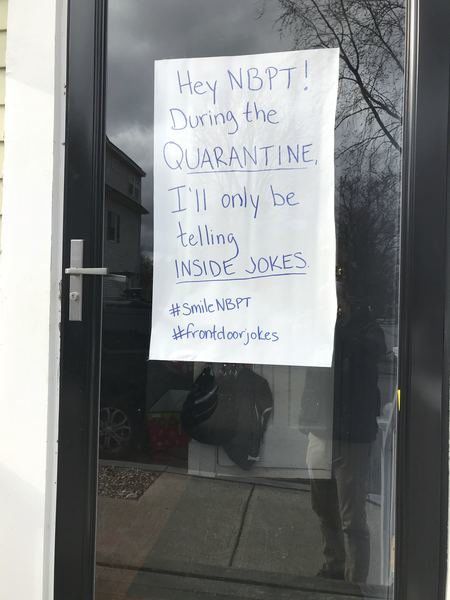 DAVE ROGERS/Staff photoA joke taped to a front door in Newburyport for the amusement of passersby. 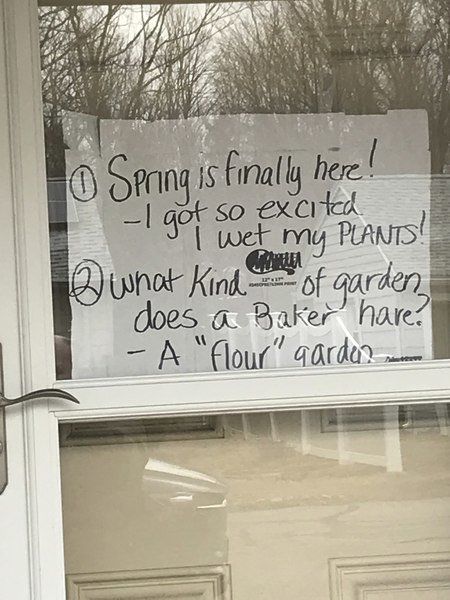 Jokes are being taped to front doors in Newburyport. 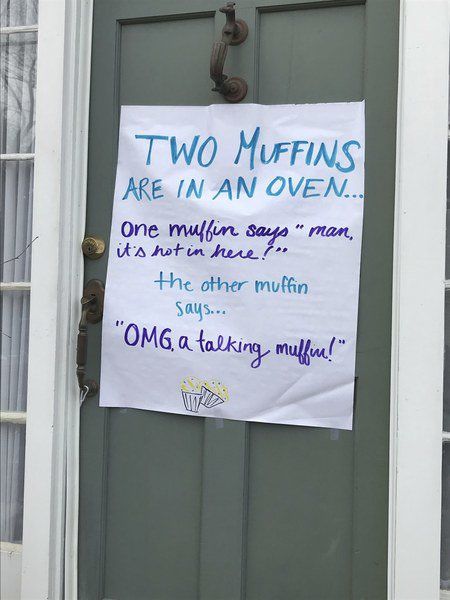 DAVE ROGERS/Staff photosOne of the jokes taped to front doors for the amusement of passersby.

DAVE ROGERS/Staff photoA joke taped to a front door in Newburyport for the amusement of passersby.

Jokes are being taped to front doors in Newburyport.

DAVE ROGERS/Staff photosOne of the jokes taped to front doors for the amusement of passersby.

NEWBURYPORT – With social distancing keeping most people apart, a campaign to keep local residents connected sprung up over the weekend on people’s front doors in the form of puns and jokes.

It is hoped by the person who came up with the idea on a whim that the smile-inducing trend will spread cheer across the city.

Within hours, the idea began to take off. First, it was her neighbors and then signs began popping up across the city from High Street to Myrtle Avenue to Congress Street and several other areas.

“It’s such a nice way to stay connected with each other,” said Congress Street resident Annelise Armstrong Grant.

Grant said Kulowiec’s idea was perfect for Newburyport considering how many people like to go outdoors.

Kulowiec agreed, saying walks help break up long stretches of home confinement. But considering people are trying to stay at least 6 feet away from each other, it can be hard to take a mental break from living in the age of social distancing.

“Which is weird,” Kulowiec said. “We feel best right now when we forget what’s going on.”

That’s been hard for Grant and likely just about everyone in the region as they adjust to a new normal.

“It’s such a weird time,” she said. “We have nothing to compare this to. There is no solid answer to how long this will last. We’re just trying to be patient and do what we’re supposed to do.”

It’s all the more reason to spread good vibes and cheer whenever and however possible, according to Kulowiec.

“I just like to do things to make people be happy, to smile,” she said.

Since Friday, residents have been posting their jokes on Facebook groups, including Newburyport Commons, Nice People of Newburyport and others with great success.

It has prompted people to change their jokes daily. The idea also sprouted roots in Wayne, Pennsylvania, where Kulowiec has relatives. Already, the concept has spread to others in that town just outside Philadelphia.

“I really appreciate to be a part of good news that’s going on right now,” Kulowiec said.

Dave Rogers is a reporter with the Newburyport Daily News. Email him at: drogers@newburyportnews.com. Follow him on Twitter @drogers41008