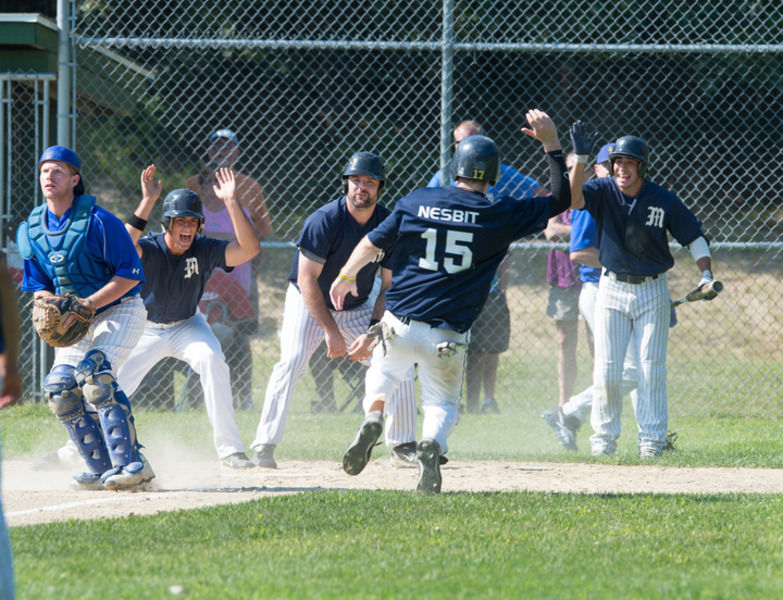 Mariners Max Nesbit heads to home plate with the go ahead run, as his teammates cheer him on Saturday afternoon against Rowley at Eiras Park in Rowley. 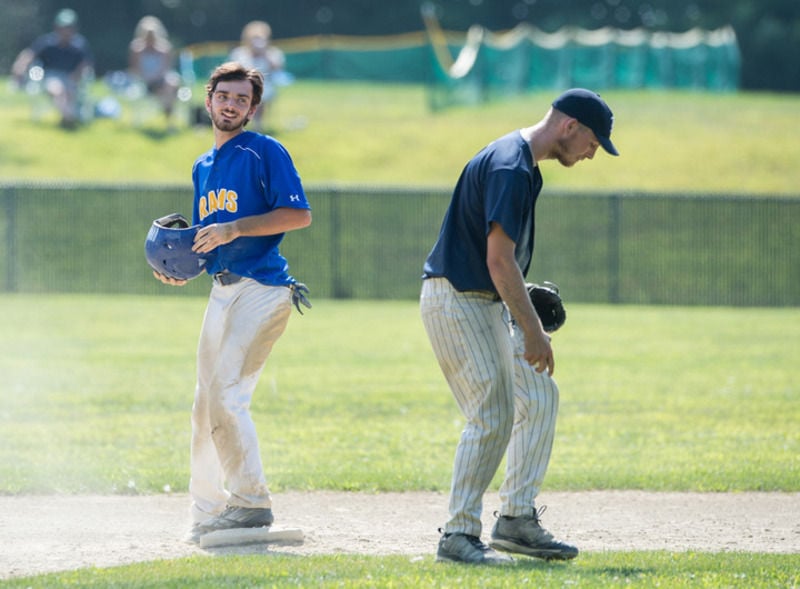 Rowley's Dmitri Hunt looks at a dejected Mike Cain of Mariners after hearing the call safe, on a close play at second base Saturday afternoon at Eiras Park in Rowley.

Mariners Max Nesbit heads to home plate with the go ahead run, as his teammates cheer him on Saturday afternoon against Rowley at Eiras Park in Rowley.

Rowley's Dmitri Hunt looks at a dejected Mike Cain of Mariners after hearing the call safe, on a close play at second base Saturday afternoon at Eiras Park in Rowley.

ROWLEY — Manchester Essex won its fifth Intertown Twilight League championship in the last six years Saturday afternoon at Eiras Park behind a strong performance from lefty Rusty Tucker that left the Rowley Rams in the dust, 6-3.

“That’s a great team we just beat right there,” Mariners coach Bryan Lafata said of the Rams. “Every game out, we know they are always going to battle. We feel good but that is a tough team. The ITL is really starting to turn around again.”

The Rams sent Mike Sloban to the mound and the right-hander gave up a one-out single to Caulin Rogers in the top of the first inning. Nate Bertolino followed that up with the same. Brett Cahill knocked a single to first baseman Joe White, who got Bertolino at second, but Cahill made it to first to put runners at the corners. Sloban would get Mike Cain to ground out to end the threat, and send Rowley to the plate to face the left-handed Tucker.

The Rams went down in order in the bottom of the first before Tucker started the top of the second with a single of his own. Adrian Frattini moved Tucker over with a single himself. Alex Ray struck out swinging next before Ryan Marques did the same. Rory Gentile would then send the ball straight to third baseman Koby Thibault, who flipped it to second for the third out.

The song would remain the same for the Rams in the bottom of the second as they went down 1-2-3. The Mariners did the same in the top of the third.

Mike White became the Rams’ first baserunner of the day with a two-out single in the bottom of the third. White then moved to second on a single from brother Joe. But CJ Ingraham grounded out to keep things scoreless.

Mike Cain started the top of the fourth with a double, then moved to third on a ground out. Cain then scored Manchester’s first run on a ground out from Frattini. The Rams’ Dmitri Hunt reached with one away on a dropped third strike in the bottom of the frame before Thibault struck out swinging. Hunt then stole second before Justin Bolla would score him with a scorched single past shortstop to tie things up.

Rory Gentile hit a single to start the top of the fifth inning the stole second and plated on the overthrow while stealing third to jump the Mariners up one again. Drew Carter started the bottom of the frame with a double out to left field before Mike White struck out swinging. Joe White did the same, looking but a double From Esposito would tie things again. CJ Ingraham then jumped the Rams up a run with a single to left.

The wheels came off the wagon for the Rams in the top of the sixth when Cahill hit a single then moved to second on a ground out. Cahill went to third on another grounder before Frattini knocked him in with a bloop single that dropped behind the mound.

“If that gets caught, it’s a different game,” Rams coach Jeff Wood said.

Ian Buckley drew a walk next and Max Nesbit loaded the bases with a single before Gentile scored three runs with a triple out to deep left.

Tim Moore closed out the Rams season on the mound in the top of the seventh, allowing no runs before the Rams went down in a row to end the season.

“I had to work really hard against these guys,” said Tucker, who has spent time with the San Diego Padres, Milwaukee Brewers, Chicago White Sox and Boston Red Sox organizations. “That is a great team. They’ve got some really pesky hitters. But I am excited that we were able to take home the championship. It’s a good group of guys over here, a good team we’ve got.”

Wishing he could have the sixth inning back, Wood found himself wistful after the game.

“In a lot of ways, the baseball gods really weren’t with us, things just didn’t go our way,” said Wood. “But that is not an excuse. (The Mariners) played good, they took advantage of opportunities and, at the end of the day, when you score more runs than the other team, you win the game.”

“This has been a great season for us,” continued Wood. “We set out every year with the goal of playing in the Finals. This was a competitive series and we were right there, competing with the best pitcher in the league.”