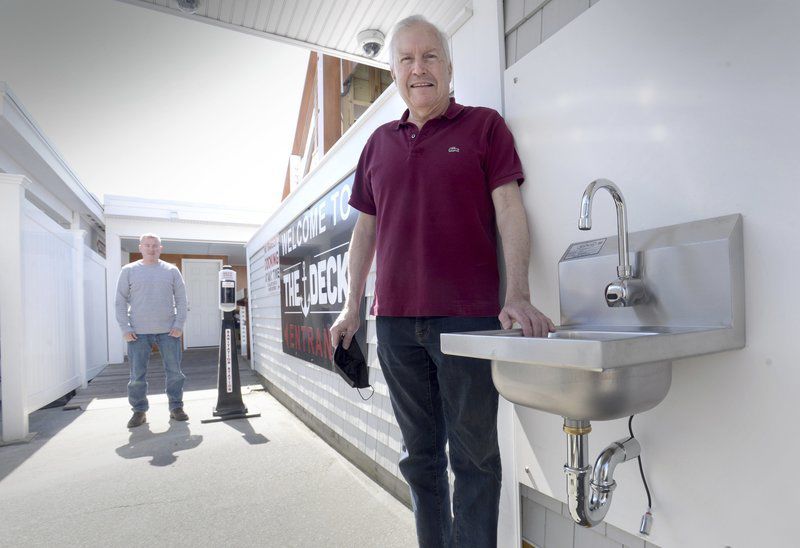 BRYAN EATON/Staff photoMark Audette, owner of The Deck in Salisbury, has installed handwashing sinks around his restaurant that will have soap dispensers and electric dryers. He also has retained Patrick Reddy of Red's Restrooms, back, to maintain hand-sanitizing stations. 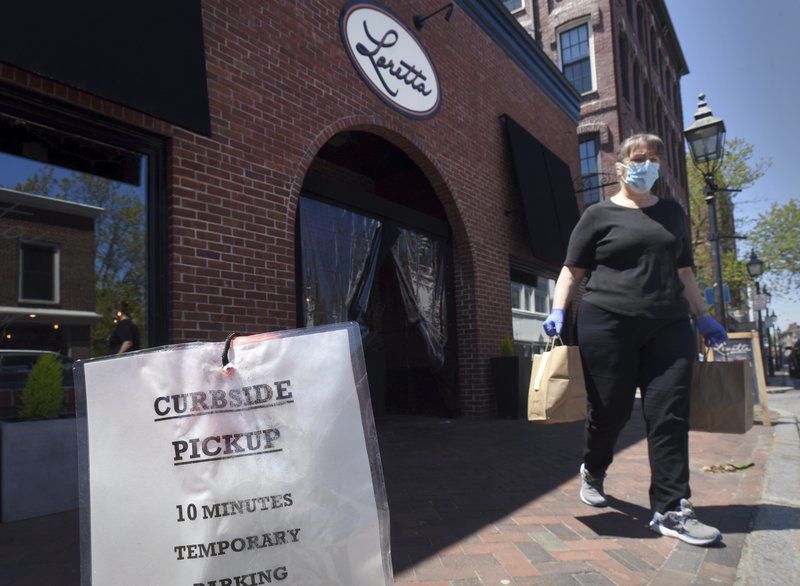 BRYAN EATON/Staff photoLorraine Jackson delivers curbside at Loretta on Pleasant Street in Newburyport, which has been open for business although dining at area restaurants was put on hold. Restaurant owners hope they will be able to offer dining soon and some are preparing for that to happen.

BRYAN EATON/Staff photoMark Audette, owner of The Deck in Salisbury, has installed handwashing sinks around his restaurant that will have soap dispensers and electric dryers. He also has retained Patrick Reddy of Red's Restrooms, back, to maintain hand-sanitizing stations.

BRYAN EATON/Staff photoLorraine Jackson delivers curbside at Loretta on Pleasant Street in Newburyport, which has been open for business although dining at area restaurants was put on hold. Restaurant owners hope they will be able to offer dining soon and some are preparing for that to happen.

They may not be able to offer their customers a seat just yet, but two local restaurant owners say they will be ready to open their doors soon.

Gov.  Charlie Baker released a four-phase plan for reopening the state's economy earlier this week, and while hair salons, pet groomers and car washes will be allowed to open with restrictions Monday, restaurants and lodging can't welcome people until Phase 2, which won't begin until at least mid-June.

Mark Audette, who has owned Salisbury's summer-seasonal restaurant The Deck since 2012, has been busy this off-season preparing the outdoor, 4,000-square-foot, riverside restaurant to open in a pandemic world.

"We've done all of the annual things that you have to do like the fire alarms and the sprinkler system," Audette said. "So we are ready for the Board of Health to come in and do an inspection soon. We won't have any food until the governor says we can open, but everything else will be operational and ready to go."

Audette said he has ordered hand-held thermometers to monitor patrons' and employees' temperatures if necessary, and has also added a handwashing station at the entrance to his restaurant.

"This way, when customers walk in, they can wash their hands without having to go to the restroom, they can do so as well when they leave," Audette said. "I've also rented a hand sanitizer from Red's Restrooms which will be right at the hostess station."

Although Baker has only allowed takeout businesses at restaurants, Audette said he is optimistic that dining in will be available by mid-June.

"It would be nice if they told us we could open on June 15, that would be tremendous," Audette said. "At least then, we won't lose the season. But if they tell me I can only lay out so many tables or whatever, that is what I will live with. We have to get back to business. The further into summer we go, the more difficult it will be for restaurants."

Audette also owns The Village in Essex, which has been offering takeout for three weeks.

"All of our staff have been wearing masks and there has been limited interaction with customers and so on," Audette said. "The one big plus that we have (at The Deck) is that we are outdoors. Things at The Village have worked out pretty good. I hope it gets better."

Loretta owner Ted Epstein said his Newburyport restaurant has never closed and has been offering takeout and curbside pickup ever since the shutdown began in mid-March.

"We've been doing takeout, lunch and dinner, seven days a week," Epstein said. "We have never been closed."

Epstein said he oversaw the application of a nontoxic, anti-microbial spray in his restaurant last week in preparation for opening to dining customers whenever the governor gives the OK.

"All of my staff at this point are wearing masks and gloves," Epstein said. "We're going to go to tablecloths when we open, rather than hard surface tables for obvious reasons. To my understanding, bacteria can stay alive on hard services like that for a couple of hours. Everything we touch even now is being sanitized. We're also not requiring anyone to sign for their credit card purchases. But, if they do, everything they touch is sanitized – pens, surfaces, door handles, the whole place."