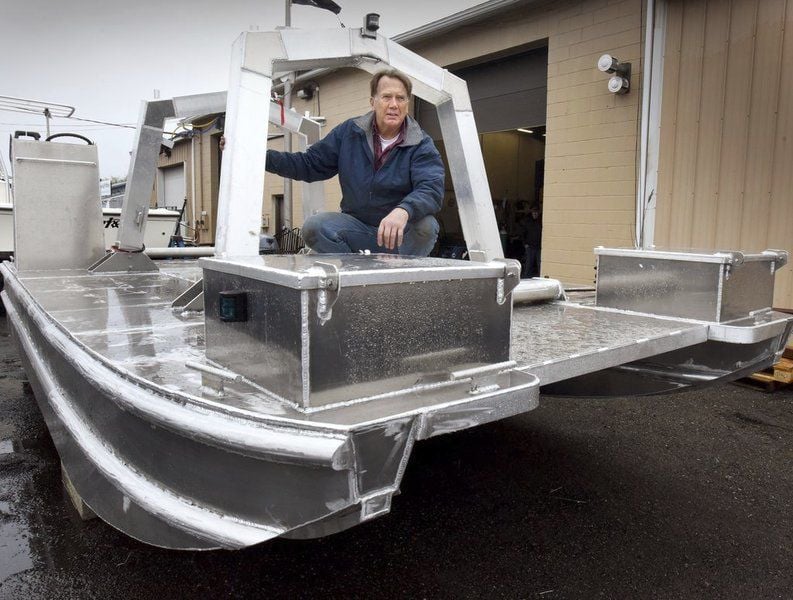 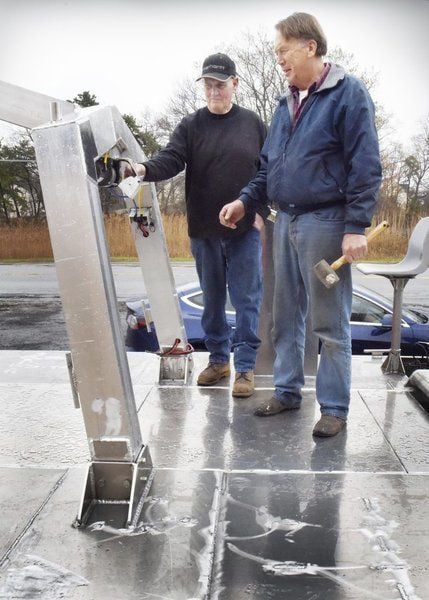 BRYAN EATON/Staff photoCliff Goudey, right, and  Wilson Welding owner Dan Wilson look over the winch built into the frame that will pull up lines of seaweed on the new harvesting boat they built. The middle plates of the pontoon craft are removed for harvesting. 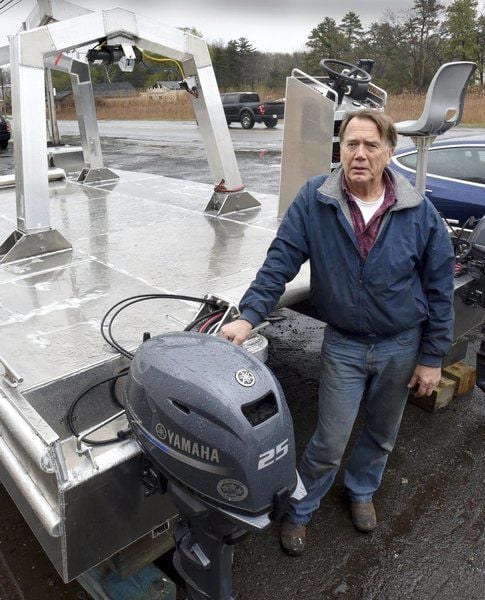 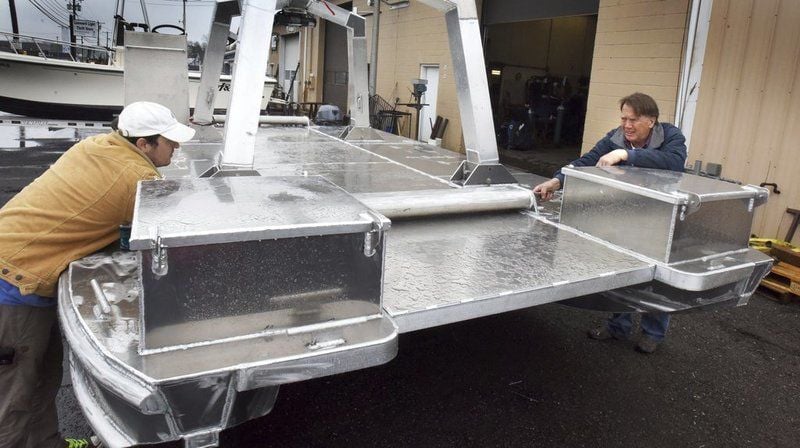 BRYAN EATON/Staff photoDominic Manganelli, left, assists scientist Cliff Goudey as they prepare for this seaweed harvesting boat to be shipped to Puerto Rico.

BRYAN EATON/Staff photoCliff Goudey, right, and  Wilson Welding owner Dan Wilson look over the winch built into the frame that will pull up lines of seaweed on the new harvesting boat they built. The middle plates of the pontoon craft are removed for harvesting.

BRYAN EATON/Staff photoDominic Manganelli, left, assists scientist Cliff Goudey as they prepare for this seaweed harvesting boat to be shipped to Puerto Rico.

SALISBURY — Drivers on Bridge Road may have noticed an unusual-looking, chrome-colored vessel taking shape outside Wilson Welding in recent weeks, but on Thursday, the boat was shipped off to be tested by a team of government scientists.

Conceptualized by Newburyport scientist Clifford Goudey and built by Wilson Welding owner Dan Wilson, the boat is a prototype seaweed farm vessel to be used for seeding and harvesting.

It was built with support from the U.S. Department of Energy's ARPA-E program as part of a project run by the Marine Biological Laboratory in Woods Hole led by seaweed scientist Loretta Roberson.

After tests this summer in Woods Hole, the 19-foot, twin-hulled craft will be disassembled, crammed into a 20-foot container, and shipped to Puerto Rico where an experimental farm is being established on the south side of the island.

Goudey, who runs C.A Goudey and Associates out of his home on Marlboro Street in Newburyport, said the boat is designed to run along two lines simultaneously, allowing for much more productivity. The deck panels between its two hulls can be removed, providing wide-open access to the lines that support the seaweed crop.

In the future, similar but much more ambitious models with the same concept could be produced, he said.

"This is all part of mechanizing the harvest process. The purpose is to be experimenting with the ways we can harvest and plant seaweed," Goudey said. "Our vision for this is to be able to seed and harvest two lines at once, but a bigger one could ultimately handle five or 10."

Goudey said the boat will be used to harvest eucheuma, a species of seaweed common in Puerto Rico that is used in a variety of products and foods. He said he hopes the boat will allow the farm to create a market for eucheuma so they can expand the farm.

"We're hoping to produce enough that we could ultimately convert it into biofuel," Goudey said.

The boat's detailed drawings and cut files were done by Bill Lincoln of Response Marine in Newburyport, and the engines were supplied by Hudson's Outboards of Salisbury.

Wilson said he enjoyed the challenge of building the unique vessel, knowing that it could have a positive impact on Puerto Rico.

"It was interesting, we've built several larger aluminum barges, but nothing with this much detail," Wilson said. "And especially because it's going down to Puerto Rico, where it could supposedly help their economy. It was a great project."