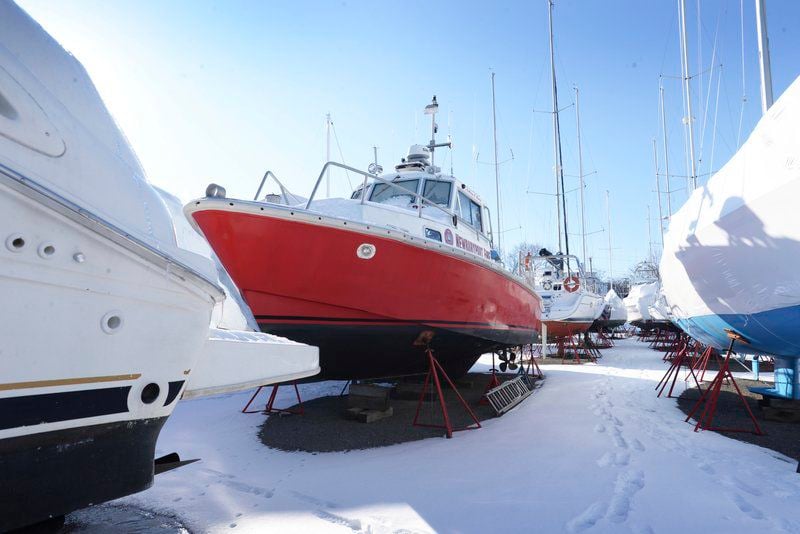 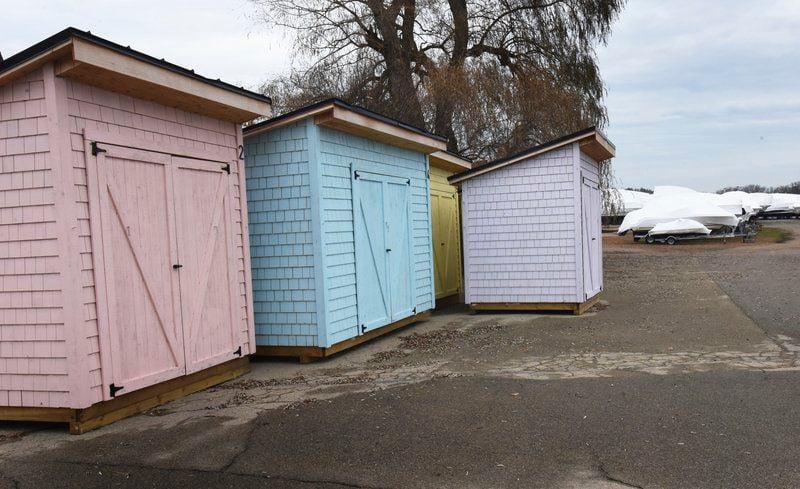 BRYAN EATON/Staff photoThe artist shanties that were on waterfront last summer are being stored for the winter at the Newburyport Boat Basin on Merrimac Street.

BRYAN EATON/Staff photoThe artist shanties that were on waterfront last summer are being stored for the winter at the Newburyport Boat Basin on Merrimac Street.

NEWBURYPORT — The city is storing its fireboat and a set of artist shanties on land owned by New England Development at no cost this winter, according to a representative for the developer, but the mayor insists the matter will not affect business between the two parties.

As reported in a story last month by The Daily News, the city and New England Development are under a formal agreement that allows city employees to park in a NED-owned lot at 9 Titcomb St. in exchange for a municipal tax exemption on the property.

Mayor Donna Holaday admitted she made a mistake when drafting the agreement because the mayor has no authority to waive property taxes. She said the agreement is being modified so the city pays New England Development for the equivalent of its property taxes and rent for the property, which it could then use to pay those expenses.

The lot is assessed at $313,900 and would have been subject to a property tax of $4,030 for fiscal 2019, according to records from the city assessor’s office. The property would also be subject to an additional $55 Community Preservation Act tax.

Since the story’s publication, there are concerns among some residents who noticed that the city’s fireboat is being stored in a New England Development-owned marina on the future site of its proposed Waterfront West development.

The proposal for a large, multiuse condominium, retail and hotel complex on about five waterfront acres has caused controversy among residents and city officials in recent years.

Additionally, concerns arose about the fact that the city’s artist shanties — which opened on the waterfront last summer — are being stored for the winter at the Newburyport Boat Basin, which is also owned by New England Development.

In an email to The Daily News, New England Development spokesman Mike Duffy confirmed that the fireboat and shanties are being stored on the company’s property “at no cost to the city.”

“We are pleased to provide the space to the city of Newburyport,” Duffy added.

John Moynihan, executive director of the Firehouse Center for the Arts, said the opportunity to place the shanties on the Merrimac Street property came about because a Firehouse board member works for the developer.

Moynihan said “there was no other storage location” for the shanties and the city had “no involvement” in the decision to store them on New England Development property.

The shanties are joint property of the city and the Firehouse Center for the Arts.

When asked if the storage of the fireboat or shanties could potentially affect the city’s dealings with Waterfront West, Holaday said, “Absolutely not.”

“(New England Development) have been here for a long time and they have a lot of property in the city, but no one sees this as having any kind of quid pro quo,” Holaday said.

“There’s no way that storing something for a few months is going to impact the work going forward on Waterfront West.”

Speaking of Waterfront West, Holaday said city officials hope to meet at the end of the month with New England Development to see where its plans are after receiving feedback from city residents and officials, most of whom have continued to criticize the project as being too large and too dense for the city’s waterfront.

“We’re trying to be optimistic that changes in the design can be supported by our community, including the Planning Board and the City Council,” Holaday said.