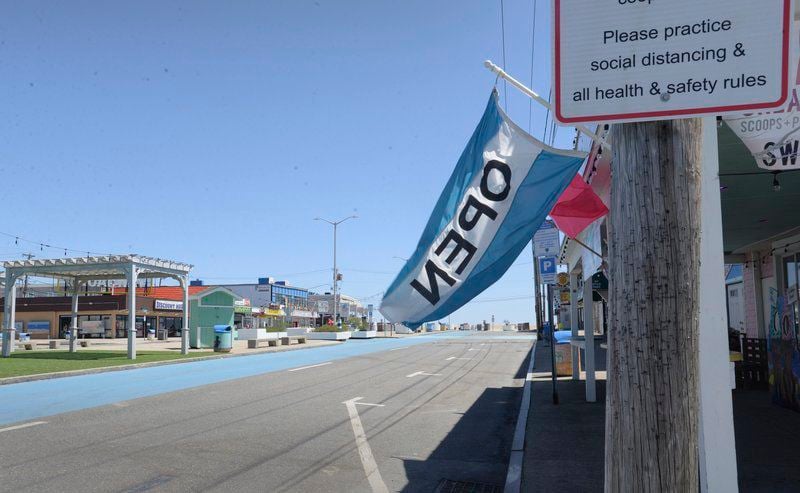 BRYAN EATON/Staff photoAn open sign outside Swell Willey's flaps in the breeze as the town lot is now open as well. The loop around the center, pictured, will reportedly remain closed to vehicular traffic throughout the summer. 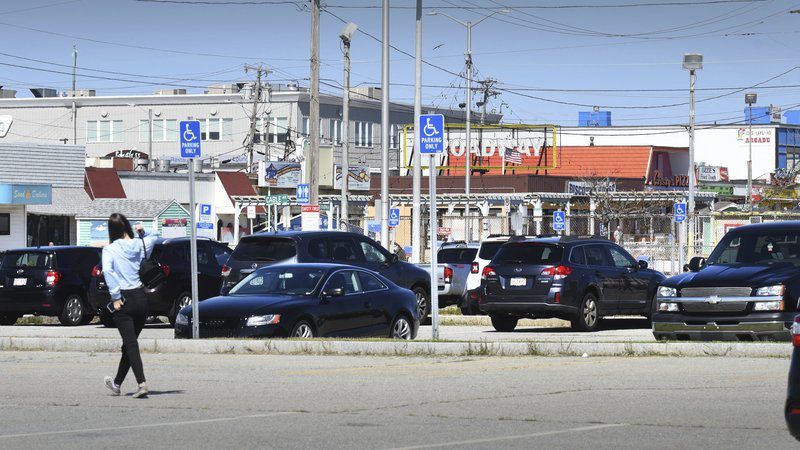 BRYAN EATON/Staff photoAn open sign outside Swell Willey's flaps in the breeze as the town lot is now open as well. The loop around the center, pictured, will reportedly remain closed to vehicular traffic throughout the summer.

SALISBURY — Paul Descoteaux is putting out the word: Salisbury Beach will be open for business this weekend.

"The beach is opening back up," Descoteaux said. "The barriers are coming down, the businesses are being opened back up for takeout only."

Two of the beach's most popular Broadway eateries, Cristy's and Tripoli pizza shops, were closed by the Board of Health after the restaurants were unable to maintain social distancing among their customers in early April.

Descoteaux sits on the board of directors for the Salisbury Beach Partnership and the Salisbury Chamber of Commerce. He said both organizations have been working with the town to make sure all goes well as more Beach Center businesses open this weekend.

“The pizza wars will be back in action," he said. "Jilly's Pizza will also be opening as well. The Seaglass Restaurant is up and running and back in action. They are offering takeout with a very extensive menu under the circumstances. If you go down to the beach now, you are going to see some of these businesses ready and able to offer you their products."

In an e-mail, Town Manager Neil Harrington said all Broadway Mall business employees and customers will be required to wear protective masks and those lining up to purchase takeout food must stay at least six feet apart when ordering and picking up their food.

Businesses will have the right to refuse service to anyone not wearing a mask and the public will be encouraged to sit at one of a dozen public tables set up along the Broadway Mall when eating, according to Harrington.

Harrington also said the town will hire public health monitors who will circulate throughout the Broadway Mall area to encourage people to "play by the rules."

"Anyone acting aggressively in violation of public health and safety rules will be reported to the Police Department," he said.

Public restrooms will be open to the public at Salisbury Beach this weekend and pylons will be set up to enforce social distancing. The town parking lots will be open, but vehicular traffic will not be allowed through the Broadway Mall.

“Safety remains the priority,” Descoteaux said. “Ultimately, we feel that we can maintain a protocol for safety that will give the merchants the ability to still offer their services and products. We are currently waiting on the arrival of hand sanitizer stations and we will get them out there as soon as possible. We understand the nature and the need to maintain social distancing. We also understand very clearly the economic impact that COVID-19 is having on businesses."

Morris said he expects to have public health monitors on scene to enforce social distancing.

"The beach businesses have also worked out a plan to mark up the street to keep people socially distancing," he said. "They will also have some employees who will be helping in monitoring. Washing down tables and things like that to keep things sanitized. Let's try it and see what happens.”