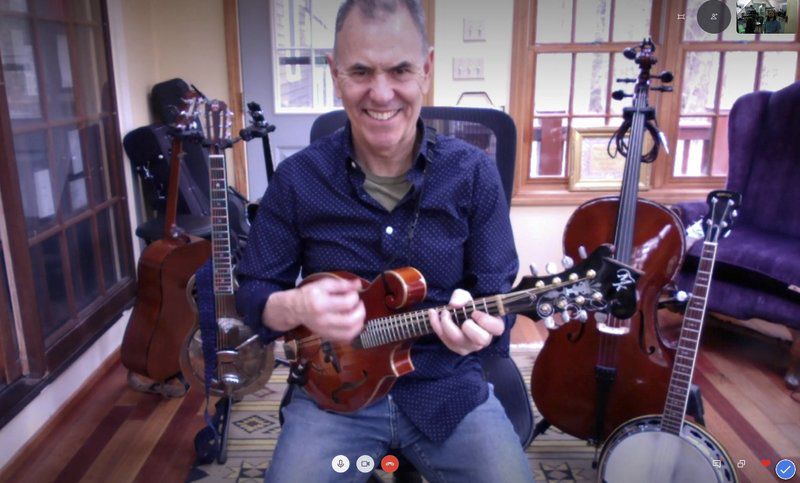 EJ Ouellette, owner of Whole Music in Byfield, began giving music lessons Skype to soldiers in Afghanistan in 2009, and years later started incorporating the practice into his business model. This is a screen shot of one of his mandolin lessons. 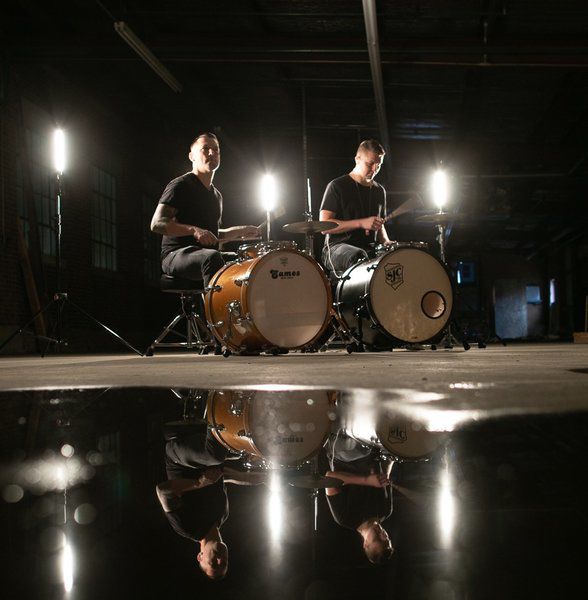 Courtesy photoZach Field, left, and a teacher, Austin Bryan, do some practice drumming.

EJ Ouellette, owner of Whole Music in Byfield, began giving music lessons Skype to soldiers in Afghanistan in 2009, and years later started incorporating the practice into his business model. This is a screen shot of one of his mandolin lessons.

Courtesy photoZach Field, left, and a teacher, Austin Bryan, do some practice drumming.

NEWBURYPORT — Amid the ongoing coronavirus shutdowns, local music teachers are moving their lessons to the digital realm in order to keep their students and themselves safe from getting sick, but the virus’ impact on business seems unavoidable.

Zach Field, who owns Zach Field Drums and Music in the Tannery Marketplace, said that lesson cancelations started rolling in once the shutdowns began, and that payroll to his staff of 28 teachers has been, for the time being, cut in half.

“We definitely will be affected,” said Field, noting the studio opened a second location – in Amesbury – in the fall. “We have people canceling their lessons from here on out because their jobs have been affected, so this is definitely going to hurt us substantially.”

But at the same time, Field said he has been feeling the support of his students and their families in recent weeks. Of the studio’s nearly 600 students, Field said about 70% have chosen to forego credit reimbursement so teachers can still be paid.

“It’s unbelievable,” he said. “Of course, some people can’t afford to do that because they’re losing income as well, but the outpouring has been amazing.”

In the meantime, Field said all of the studio’s 28 teachers are now offering lessons in every instrument via Skype from their own homes.

He said that while Skype’s digital lag makes it so students and teachers can’t play in sync with each other, it forces the teachers to alter their teaching styles to be more focused on cycles of listening to students and giving feedback.

“I’m looking at it like, at least for our situation, it’s not the same as in-person lessons, but it’s actually allowing us to try a different method and change it up a little bit,” said Field.

Additionally, Field noted that the studio has created Google Drive folders with hundreds of PDF guides for students, each broken down by instrument and skill level, and has worked out a method of screen-sharing to allow for easier communication during lessons.

“I’m teaching in a very different way from how I normally would, but I’m very excited about it,” said Field. “I’ve been getting a reminder of why I do this. You can get jaded being a musician all these years, but this has reminded me of how good sitting down and playing my drums can feel as just a method of escape.”

Joe Holaday, a local musician who teaches guitar and bass at Zach Field Drums and Music, said that since the shutdown all of his musical projects have been put on hold, including Beatlejuice, Mike Girard’s Big Swinging Thing and Jump Street.

Holaday teaches about 16 students per week at Field’s studio, and while he admitted he is not the most “up-to-speed” person with Skype, he anticipates that there might be some hurdles to overcome with using the platform.

“I’m not tech-ignorant, but I’m a bit of a troglodyte in that way,” he continued. “I’ll be interested in how it’s going to work. When we play music, there’s a certain type of electricity, and you have to be within a certain proximity to feel it.”

Still, Holaday said he has hope that children and teens who are much more used to working with screens will be receptive to Skype lessons.

“I think the younger folks are much more adaptable to this type of delivery system — computers and screens — so they’ll probably get more out of it than I will, only because screens to me are distractions,” he said.

Although the ongoing shutdowns may pose challenges for many, Holaday said he hopes that people will use some of their extra time to pick up their instruments or learn a new one, and that music can help get them through difficult times.

“You might find something you love,” said Holaday. “The beauty of music is that it can be played on all levels. You can dream big, or you can do it for your own enjoyment. There’s nothing better than sitting around after a family dinner and singing songs together. It’s one of the most joyous things ever.”

For EJ Ouellette, owner of Whole Music in Byfield, teaching remotely via Skype is nothing new. Ouellette began giving online music lessons to soldiers in Afghanistan in 2009, and years later started incorporating the practice into his business model.

Ouellette said that the online lessons offered by him and his studio’s three teachers have given young, technologically-inclined students the ability to learn a variety of instruments from the comfort of their own homes.

“What I find that’s going on is that they’re really tuned in to screens, and they actually pay attention better because you’re looking right at them,” said Ouellette. “I’m getting emails back from the parents and they love it.”

And as he explained, virtual lessons have only allowed his business to grow beyond the bounds of the local area, creating a network of teachers, students and artists around the United States and beyond. Through his remote artist development program, Ouellette has also been able to coach songwriters around the country and teach them how to produce and record their own music at home.

“Technology is really bringing this world together in so many different ways,” said Ouellette. “If you are an experienced teacher, I think this is going to change the game.”